Hennessy Youngman is the sharp-eyed, sharp-tongued prankster gangster behind the YouTube series 'Art Thoughtz.' The videos feature Youngman "waxin' poetic" on art world hot topics, from Damien Hirst to relational aesthetics, through the hilarious and enlightening perspective of an outsider hip-hop fan. Art In America called him "Ali G. with an MFA." We have become obsessed with this amateur through which serious criticism flows with a sick beat. We decided to ask him a few questions about his work; scroll down to see a slideshow of his videos. 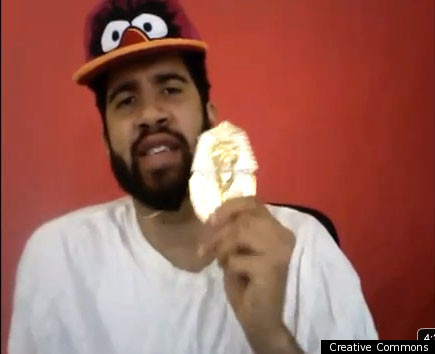 HuffPost Arts: What first made you interested in the art world?


Hennessy Youngman: My first interest in art came from being a guard at the Philadelphia Museum of Art, but specifically from the Cy Twombly paintings there, his series Fifty Days at Iliam about the end of the Trojan War. Real Talk though: i didn't like those paintings at all. They supposedly were about a war, but all they were was some colored scratching, scribbles, and text scrawlings like you'd find in some serial killer's apartment on some "stop me or I'll kill again" type shit. Luckily though I heard a tour guide discussing the paintings with some school kids, how all that crap in the painting was standing in for all these psychological qaulities of Greek and Trojan culture and I was like "Hmm... okay..." Hearing that kinda reminded me of the artwork you'd find on a box of an old Atari game, like Space Invaders for example, the box art had this banging painting a UFO landing in like some Nevada desert, but when you popped the game into your console, it was some 2-bit bloopedy-bloop simple ass pixelated roaches scrolling down the screen. Where was the tension and drama of that cover art? The cover represented the idealized version of the emotional experience the simple graphics presented in the game, and those simple graphics were supposed to work in conjunction with my imagination in order to to take me to some special place while gaming. So to me, the Twombly paintings kind of functioned similar to those Atari graphics, and it was up to me as a viewer to meet the paintings half way and accept Twombly's system of information display and decipher his language. Once I became more understanding, the magical world of art opened itself up to me.

HuffPost Arts: You gain knowledge from the internet and output your knowledge on the internet. How much time do you spend on the web? What do you think the art world would be like without it?

Hennessy Youngman: How much do I spend on the internet? It's hard to gauge, like way more than my moms for sure, but not as much as 50Cent does on twitter. And most of my time spent online has nothing to do with art really, I seldom visit art blogs or read art criticism or reviews online. I spend most of my time online between datpiff.com looking for mixtapes, ign.com reading video game reviews, and at victory-light.blogspot.com getting culturally enwisened by Mero, the writer of that blog.

I'm a fan of diffuse quantity of opinions and content, and the internet, for better or for worse has expanded the "marketplace" of ideas, adding a lot more voices to the conversation of our time. And this extends into the art world somewhat, really more into arts criticism, and though an audience can pick and choose their own content creators, I don't know how much a scathing review of an exhibition on a blog (or my Damien Hirst episode of ART THOUGHTZ ) would actually effect collectors and institutions or people who wield power (money) in art. The art world is not an accountable institution, like Bank of America shying away from that $5 surcharge because of an online petition. Motherfuckers are unscrupulous in art and there are very little rules. I mean look at Sotheby's locking out their art handlers after one of its most profitable years in its entire history. What kind of shit is that? It's excellent that Occupy has been using the internet to disseminate info about Sotheby's practices.

Basically, an expanded convo exists today and ultimately it's a good thing.

HuffPost Arts: You talk a lot about the role of an artist's identity in becoming successful. How important do you think identity is in terms of 'making it in the art world' and do you consider this when you make your art (Art Thoughtz)?

Hennessy Youngman: This art shit is niche market. And whether or not artists want to admit it, they all carry a brand within their work. There might be some sincere artist reading this saying "My work isn't a brand, shithead!" Well you know what? Sincerity is that artist's brand. And yes, I'm a shithead. You must've been talking to my mother earlier.

Even if an artist produces disparate bodies of work, things that don't seem like they came from the same person, like Mike Kelley's oeuvre (i can spell it but can't pronounce it) for example, when left in the hands of an adept Curatorial Studies major with a minimum 2.8 GPA, Kelley's work can be reduced to summary and specialized product with unifying strands that soon become signature.

Hennessy Youngman: Ha, "art" versus the "real", that's a big fucking polemic son! I guess the divide exists because many many decades ago, art became less about simple mirror reflection of the physical world, and more about it's own materiality, about the processes specific to its production, ideas took precedence over product, questions, critique, provocations and research became staples of art production while audiences held onto the notion they were supposed to be entertained by art, but art isn't a pop song. Don't get me wrong, art doesn't always have to be this dense bramble of graduate school buzz words, intellectually impenetrable (boring) work, but audiences shouldn't always assume that if they don't "get" a work, that the work they're experiencing is bullshit. Maybe artists and audience can meet in the middle and agree they're both idiots and listen to Tyga's Rack City until transcendental truth rains down on them all like someone set the Tree of Life on fire... I don't even know what that means.

HuffPost Arts: As someone passionate about both hip-hop and fine art, what can the art world learn from hip-hop culture?


Hennessy Youngman: Loosen the fuck up.

HuffPost Arts: What is the one weirdest tradition or belief that the art world upholds that you think is garbage?


Hennessy Youngman: There should be a clearer acknowledgement of how important money has been in the shaping of art history. And not just relegate that acknowledgement to the past, like "The MeDici's were XYZ's patron" but clearer lines should be drawn showing the circle jerk between galleries, collectors, those collectors relationships to museum collections, and the trusties of those museums relationship to how their capital is derived in the world and satan baby Blue Ivy Carter (Retrac Yvi Eulb amongst the those who know the truth). I'm too lazy to do this kind of research but I know someone out there can.

HuffPost Arts: Your videos are a hit on YouTube. Have you noticed any signs of fame? Are you being treated differently? Does it sometimes go to your head?

Hennessy Youngman: I'll consider my videos a hit once I'm doing Antoine Dodson Bed Intruder numbers and my credit rating is out of the "Just Be an Indentured Servant" score range. But to answer your question, yeah people treat me differently. For instance, just like a rockstar or dirtbag DJ might get naked pictures from their fans, my fans send me links to their portfolio website and ask for crits.

This is the life.