You've probably seen them at a gallery at some point, but then again, this Austro-German duo is arguably its own moving museum. Meet the living works of art, EVA & ADELE, the married lookalikes who are involved in a lifelong performance project.

Much of EVA & ADELE's work revolves around questions of gender, which they responded to by creating their own sex through their artistic rituals. Their recognizable and unique aesthetic involves feminine dress, pancake makeup, and shaved heads. But it goes beyond the surface, since the duo eats the same food, dresses the same, and has not spend a day apart since they can remember. We asked EVA & ADELE some questions about the theory behind their works and the mechanics of such a devoted, lifelong project. 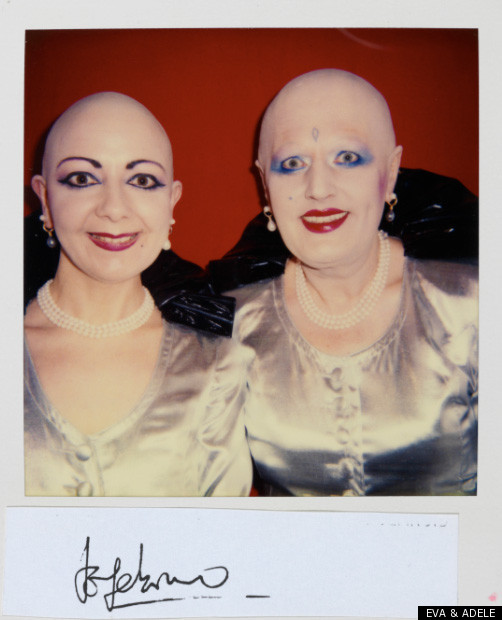 HP: How long did it take you to decide to never spend a night apart?

During this journey, we developed a video work together, the first EVA & ADELE Artwork "HELLAS." During that 3-month period, we were fighting with each other and we both did learn to put all our potential in the film. The next step was that we signed a contract for a studio from 1st January 1990 in Berlin. Our first subversive act of participation as a performance "Living Work of Art" took place at the Venice Biennale 1990.

The big media attention and our love did bring us to a situation where we were thinking about a lifelong project. The proposal for an EVA & ADELE lifelong project did come from Adele, and Eva asked for "one year of consideration." In this year of consideration, the "Wedding Metropolis" happened on 11th April 1991. Today, we think that the decision to act in a performance as two brides had already been a done deed for EVA & ADELE as the Gesamtkunstwerk (Editors note: Gesamtkunstwerk = an ideal work of art).

HP: Eva, you went through a grueling legal process to change your birth certificate to reflect that you are female. And yet you both invented your sex, a complicated and calculated mixture of female and male parts. To what extent do you identify with established gender norms?

E&A: To identify with established gender norms was had never been possible for us. We have both always thought that to be an artist you have to be laid back and not to stick rigidly to conventional gender identification.

We as artists have the possibility to think and live in another dimension, in the dimension of art, not of nature. EVA & ADELE is the bloody gender correction with art.

E: I decided to went though the grueling legal process, because we would have loved to marry but not as a heterosexual couple and my self-identification is female. 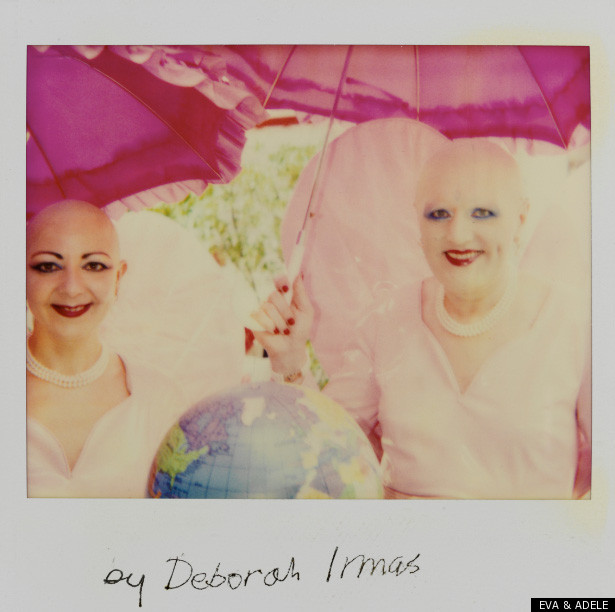 HP: Do you think your invented sex is something specific to you two as living works or is everyone inventing their sex to some extent, even if they are unaware of this? Do you think sex is more fluid now?

E&A: Absolutely, we do think that sex is more fluid, and there is a Kingdom, a very, very big space between male and female. Let's fill this big space with creativity and humanity.

HP: You mention in 'The Guardian' that it is difficult for contemporary artists to be taken seriously. I found this interesting because it seems as though in many respects you expose the playfulness and freedom in boundaries that are often rigid. What do you think of seriousness: is it a virtue or a curse?

E&A: Oh,that's a good question, it is indeed both a virtue and a curse. We love to fight against this rigidity and at the same time, we are happy that this rigidity gives us a reason to fight, in a playful and liberated lifelong act.

HP: Your appearance is nearly identical. Are your personalities as similar? Do you often disagree about where to go, what to wear, what to eat?

E&A: Our Personalities are extremely different, we have everyday a lot of discussions that make our live very vital and alive. As professional artistcouple, we give "personal mental state " no space. The Target is to be agreed at every discussion. We do always eat the same,a conceptual work of art! To invent new costumes is part of our work and we decide what to wear as a conceptual work of art. 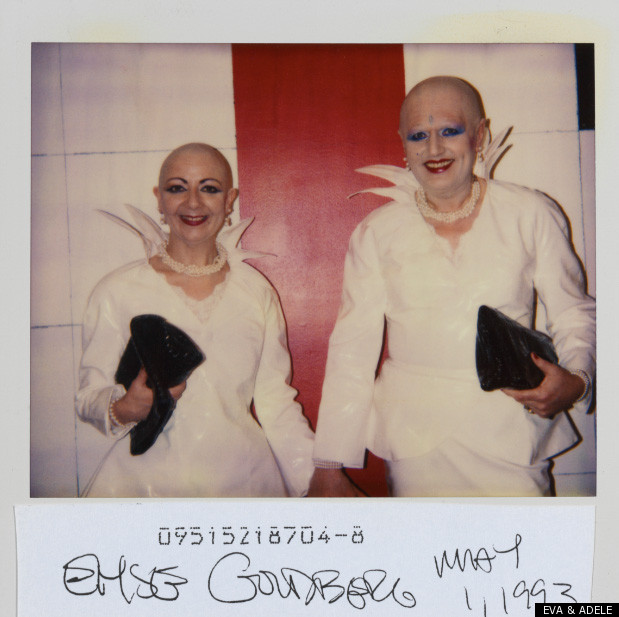 HP: Your appearance and your lives have become living works of art that inspire mass audiences. Would you say that your lifestyle is an expression of your true souls or that you are putting on a performance? Is this self-expression pointing inwards or outwards? Is there a division there?

E&A: No, there is no division, our true souls are part of the expression of "the performance". This self-expression is pointing at the same time inwards and outwards, with a kind of professional distance.
Without our own souls and our own personalities we could never create a work like that. On the contrary, the work needs the full soul and full personality of both of us.

HP: Is there a particular work from art history that inspires you?

NOTE: EVA & ADELE specified that in English, "appearances" means something quite different from "appearance". It has a negative tone. It means you are cheating and not real.

See the featured works in Eva & Adele's exhibition "The Artist = A Work of Art by EVA & ADELE" at MOCAK.