Rick Perry is running for president again, because if at first you don't succeed, try, try... um, what’s the third one there? Let’s see...um, um. I can't name the third one. I can't. Sorry, oops. Lincoln Chafee thinks the U.S. should adopt the metric system -- FINALLY, someone is discussing the 226.786 kilogram elephant in the room. And Hillary Clinton will unveil a proposal that all Americans be automatically registered to vote at 18 unless they opt not to. Plus the the proposal will create jobs by employing thousands of New Black Panther members to intimidate young Republicans from registering. This is HUFFPOST HILL for Thursday, June 4th, 2015:

NEW SNOWDEN DOCUMENTS DISCLOSED - Nice little USA Freedom Act palate-cleanser for ya. Pro Publica & Times: "Without public notice or debate, the Obama administration has expanded the National Security Agency's warrantless surveillance of Americans' international Internet traffic to search for evidence of malicious computer hacking, according to classified NSA documents. In mid-2012, Justice Department lawyers wrote two secret memos permitting the spy agency to begin hunting on Internet cables, without a warrant and on American soil, for data linked to computer intrusions originating abroad -- including traffic that flows to suspicious Internet addresses or contains malware, the documents show. The Justice Department allowed the agency to monitor only addresses and 'cybersignatures' -- patterns associated with computer intrusions -- that it could tie to foreign governments. But the documents also note that the NSA sought to target hackers even when it could not establish any links to foreign powers. The disclosures, based on documents provided by Edward J. Snowden, the former NSA contractor, and shared with the New York Times and ProPublica, come at a time of unprecedented cyberattacks on American financial institutions, businesses and government agencies, but also of greater scrutiny of secret legal justifications for broader government surveillance." [NYT & ProPublica]

CLINTON TO PUSH FOR UNIVERSAL & AUTOMATIC VOTER REGISTRATION - Hopefully she'll pose herself probing questions about this during her self-interview. Jennifer Epstein: "Hillary Clinton wants all Americans to be automatically registered to vote upon turning 18 unless they take active steps not to register, she will say Thursday in a speech on voting rights in Houston. Clinton will also call for broader modernization of the voter registration system aimed at making it easier for Americans to register and stay on the rolls as they move or make other life changes. Those proposals, and others she will put forward Thursday at Texas Southern University—including a pitch to encourage all 50 states to allow at least 20 days of early voting—are squarely aimed at helping secure the franchise for the people most likely to encounter obstacles at the polls: the young, minorities and senior citizens." [Bloomberg]

John McCain is tired of the NFL draping itself in the flag for money.

TODAY IN 2016 TEDIUM: "Former Florida Gov. Jeb Bush will run for president in 2016, according to several senior aides, who confirmed Thursday that the Republican would formally announce his widely expected decision in Miami later this month." [Associated Press]

DAILY DELANEY DOWNER - From my food stamps inbox: "I am 72 years old and receive $93 worth of food stamps. My earnings are $763 a month. I have worked all of my life, raised three boys with no welfare or child support. I have always had a good job that paid half what a man made. No retirement, no health insurance, So, when I finally retired, my social security is half what a man gets. I do get hungry a lot. I never buy lobster, shrimp, beer or go on Caribbean cruises."

RICK PERRY JUMPS IN PRESIDENTIAL RACE… AGAIN -
Rick Jervis and Catalina Camia: "Former governor Rick Perry officially kicked off his second bid for the White House on Thursday with a blistering critique of the Obama years and a campaign pitch that touted his record in Texas. 'We have the power to make things new again, to project America's strength again, and to get our economy going again. And that is exactly why today I am running for the presidency of the United States of America,' Perry told supporters at the kickoff of his campaign. Perry announced his candidacy in front of a C-130 prop plane in an oversized hanger at the Addison Airport in this Dallas suburb. The aircraft, emblazoned with the "Perry for President" logo, is similar to those he flew while serving as a captain in the U.S. Air Force. Guests at the announcement included American Sniper widow Taya Kyle and retired U.S. Navy SEAL Marcus Luttrell, author of Lone Survivor." [USA Today]

Rick Perry took the stage at his presidential announcement to a rap song, further evidence of the depraved culture of presidential candidates. 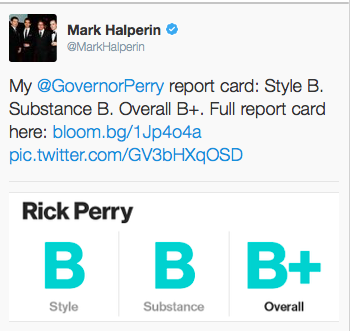 My God they pay you so much

LINCOLN CHAFEE READY TO TAKE DOWN GEORGE PATAKI - A Lincoln Chafee / Bernie Sanders-only debate where both are asked to program a multi-purpose remote on stage. Ben Kamisar: "Former Rhode Island Gov. Lincoln Chafee officially jumped into the race for the Democratic presidential nomination on Wednesday, launching an uphill battle against Hillary Clinton and better-known Democratic rivals. 'I enjoy challenges, and certainly we have many facing America,' Chafee said at a speech at George Mason University in Arlington, Va...Chafee's broad announcement speech ticked through a number of positions, including ending "extra-judicial assassinations" by drones, halting the death penalty, and changing America over to the metric system. 'Earlier I said, 'Let’s be bold,'' Chafee said. 'Here’s a bold embrace of internationalism: let’s join the rest of the world and go metric.' 'I happened to live in Canada as they completed the process. Believe me it is easy,' Chafee said. 'It doesn’t take long before 34 degrees is hot. Only Myanmar, Liberia and the United States aren’t metric and it will help our economy.' " [The Hill]

LAWMAKER LUVS TRANSFATZ - You literally couldn't come up with a better name for a person who flagrantly defends America's nutritional status quo than "John Shimkus." Mike McAuliff: "More than two-thirds of American adults may be obese or overweight, but one of those adults, a congressman from Illinois, still decided Thursday to mock new federal standards that will require fast-food chains to list calorie counts. 'I don't think I've ever in my life read a menu label,' said Rep. John Shimkus (R-Ill.) at an Energy and Commerce Committee hearing on a bill that would roll back some of those labeling requirements for pizza chains, supermarkets and convenience stores. 'I don't think I've ever looked for calorie numbers on anything I've consumed. And I betcha I'm in the majority of Americans,' Shimkus said. 'This is the perfect example of nanny state, of a national government telling individual citizens and saying what is best for them.'" [HuffPost]

Mike Elk is the millennial Tammy Haddad: "Gawker’s unionization has reinvigorated Politico Pro labor reporter Mike Elk’s effort to organize his workplace. He sent an email to the entire staff Thursday morning commemorating the 'historic victory.' ... Elk’s plea for solidarity came a day after he emailed the staff listserv about his birthday party and its importance in the fight against gentrification and 'booty' liberation... 'This party is about finally getting that hot tinder date & blowing them off because you suspect they might be a yuppie … This party is about nobody going home alone because this is my birthday party and everybody gets laid!'" [Free Beacon]

CHRIS HUGHES IS NOT THE WORST! - The Facebook co-founder and New Republic owner is doing some PR repair: "Even before [Yahoo's Guy Vidra replaced Frank Foer], word was circulating in media circles that Hughes was looking to hire a new C.E.O. who would shake things up, specifically by hiring a new editor to replace Foer. 'In bringing Guy in, we were making a pivot … to new kinds of digital storytelling,' Hughes told me. 'And that was not Frank’s strong suit. And he specifically said that to me.' When I told him that the departed staffers I spoke to told me they were not afraid of change and were willing to write for the Web, he cut me off. 'Stop right there--that’s the problem…. Anyone who said that, that really means: I really want to write for print, but if the Web editor is annoying enough, then I’ll fire off a blog post once a week. That can’t be our starting point.'" [Vanity Fair]

Wait, maybe Chris Hughes is the worst! "Chris Hughes, the publisher of The New Republic, and his husband, Sean Eldridge, will hold a fund-raiser for Hillary Rodham Clinton’s presidential campaign, two people briefed on the invitation said. The event will be held on June 30 at the couple’s Lower Manhattan home, the people said." [NYT]


Hiccup: Yesterday we attributed an item on a Hillary Clinton speech to Politico's Dylan Byers when it was actually Politico's Hadas Gold on the byline. Apologies.

BECAUSE YOU'VE READ THIS FAR - Here are some baby ferrets.

GOP BELTWAY TYPES GET DRUNK, CELEBRITY-SHAME HASBEENS - Pretty sure this is as close to "Eyes Wide Shut" that a Republican gets in Northern Virginia. Kate Glassman Bennett: "Who knew a chance meeting at a local holiday party would lead to the acquittal of a felony charge for a beloved, C-list, sitcom nerd? Evidently, that's just what happened the night Dustin Diamond, better known as Screech from 'Saved by the Bell,' attended the annual bash thrown by former Hill GOP spokesman Ron Bonjean and his wife, Sara, a Republican fundraiser and founder of Rose Strategies. Some back story first: At raucous Christmas parties hosted in their Alexandria, Virginia, home, the Bonjeans have delighted friends for the past five years with a surprise has-been celebrity guest such as Gary Busey, Erik Estrada, George Wendt and Dennis Haskins (aka Mr. Belding, also of SBTB fame). The guest is always picked up at the airport and driven to the Bonjean house by Doug Heye, a communications guru and frequent television talking head, who happily accepts the role of chauffeur each year." [Politico]

- A supercut ofanalog control panels in movies. Props to the Death Star for being able to destroy planets but having the interface of a 1950s AM radio studio.

- A history of the disco ball.

- Why Starbucks is taking the cappuccino off its menu.

@SimonMaloy: ACORN, I'm told RT @elisefoley Is there any compelling reason not to have automatic voter registration?

@connorobrienNH: At the Senate carriage entrance, Tom Carper tells Capitol Police who he's escorting. "This is the Postmaster General...I can vouch for her."