The Senate reached an agreement on an emergency bill for Flint when both sides agreed that it was far easier and less costly than actually addressing the problem. Rep. Bill Shuster has been partying with people who have testified before his committee, a level of unprofessionalism we haven’t seen since Trey Gowdy and Hillary Clinton were spotted on that tandem bicycle. And a new poll finds no one wants Michael Bloomberg to be president. Don’t worry Mike, neither party is interested in supporting a Jew or New Yorker for president. This is HUFFPOST HILL for Wednesday, February 24th, 2016:

WHY IS ANYONE LISTENING TO A BUNCH OF LAME DUCK SENATORS - Michael McAuliff: President Barack Obama is in the last year of his second term, Republican senators argue, so he should no longer have a say in something so important as who sits on the Supreme Court. Let's wait for the voters to weigh in this fall, they say….If after a mere three years, however, Obama has lost his mandate, what about those other elected officials who haven't gone before the voters in five years? There are 34 senators serving the final years of their six-year terms. Ten of them are Democrats, and 24 are Republicans, including at least seven facing difficult re-election fights…. 'I don't have any idea what that means,' said Sen. Lindsey Graham (R-S.C.), another member of the Judiciary Committee, when presented with the lame-duck senator scenario. Both Grassley and Graham, who is not currently up for re-election, signed a letter Tuesday vowing that the Judiciary Committee would not hold hearings on an Obama nominee to the Supreme Court. Graham had just left a news conference with Sens. Kelly Ayotte (R-N.H.) and John McCain (R-Ariz.) denouncing Obama for proposing to close the Gitmo prison camp. 'It's a ridiculous analogy, but I appreciate it,' said Ayotte, who is facing a tough electoral challenge this year from New Hampshire Gov. Maggie Hassan (D)." [HuffPost]

TRUMP REALITY CHECK: HE'S WINNING, HE'S PROBABLY GOING TO WIN - Please work through whatever no-really-Mitt-could-parachute-in-and-rescue-this-thing repression you must to accept this fact. Natalie Jackson: "HuffPost Pollster’s polling averages have pointed to Trump as the front-runner in most contests for several months -- and with the notable exception of Iowa, they’ve been mostly right in the primaries and caucuses that have taken place. Perhaps Cruz's unexpected victory in Iowa generated a false sense that the polls would be wrong and Trump wouldn’t win. After all, polls projected Trump to win with 31 percent of the vote, and he wound up in second place with 24 percent. Ted Cruz, who was polling at 24 percent, won with 28 percent. But even so, polls weren't necessarily wrong -- they just left the field too early and weren't able to pick up on the last-minute momentum shifts. Although polls overestimated Trump in Iowa, they did correctly point to his win in New Hampshire and South Carolina. They even nailed his win in Nevada on Tuesday, which is notable given the scarcity of available polls, coupled with the general difficulties associated with polling the Nevada caucuses. In fact, the only candidate whose vote totals have been consistently different from the polls is Florida Sen. Marco Rubio. In three of four contests so far, Rubio has won more support in the election than in the polling averages, and a poor debate showing could have been to blame for his underperformance in New Hampshire." [HuffPost]

@realDonaldTrump: "The polls show that I picked up many Jeb Bush supporters. That is how I got to 46%. When others drop out, I will pick up more. Sad but true"

REMINDER - Donald Trump has some incredibly racist supporters, as HuffPost reporter Julia Craven has been reminded on Twitter yesterday and today. "Hundreds of people have tweeted at me in the past 12 hours with messages that echo various notes Trump has struck on the campaign trail -- his contempt for black people and their concerns, his casual misogyny, his anything-but-compassionate language regarding mental illness and his genuinely frightening readiness to suggest that maybe it's OK to meet words with physical violence." [HuffPost]

SENATE REACHES DEAL ON FLINT - Laura Barron-Lopez: "Senators reached a deal Wednesday to make money available to cities like Flint, Michigan, which desperately needs to replace lead pipes that have potentially poisoned thousands. After weeks of negotiations, Sen. Jim Inhofe (R-Okla.) said he and Michigan Sens. Debbie Stabenow (D) and Gary Peters (D) had reached an agreement on how to pay for the money that will be made available to not only Flint but alsoother cities that have crumbling water infrastructure. The measure was fast-tracked on Wednesday, setting up a possible vote as early as next week to redirect $250 million from the Energy Department's Advanced Vehicle Technology Fund. While it doesn't send money directly to Flint, the city will be able to apply for a loan to receive a chunk of the money...If the proposed procedure is agreed on, the bill will move forward as a standalone and then be tethered to House-passed legislation that clarifies the Environmental Protection Agency’s requirements for when it must notify the public of high concentrations of lead in drinking water." [HuffPost]

BILL SHUSTER SHOULD PROBABLY TAKE THE HINT FROM POLITICO AND BREAK UP WITH HIS GIRLFRIEND - We look forward to yet another "but look at all of the people Politico reporters date!" retaliatory piece that is planted in a conservative news outlet and then taken down. Jake Sherman, Anna Palmer and John Bresnahan: "On Feb. 10, Nick Calio, head of the nation’s top airline trade group, Airlines for America, testified before Rep. Bill Shuster’s House Transportation and Infrastructure Committee. The topic was a top priority for both men: A bill to overhaul the Federal Aviation Administration, most controversially by putting air traffic control in the hands of an entity favorable to the airlines. Two days later, Shuster’s committee approved the measure. And the week after that, he and Calio escaped to Miami Beach, Florida, with Shelley Rubino, an Airlines for America vice president who is Shuster’s girlfriend...It’s the most recent example of Shuster’s cozy relationship with the powerful airline association. His panel has jurisdiction over the $160 billion U.S. airline industry. The FAA bill is critical to the Pennsylvania Republican’s legacy, and to Airlines for America’s members, which include every major airline and cargo carrier in the country except Delta Air Lines." [Politico]


Thanks to Loren Mullen from Jeff Merkley's office for making this after we mentioned in yesterday's edition that Orrin Hatch should avoid talking to Obama's eventual SCOTUS nominee by "walking around with giant sunglasses and comically large Beats By Dre headphones."

SCOTUS FIGHT: WHITE HOUSE DEFINITELY TRYING TO TROLL GOP AS HARD AS POSSIBLE - Alternate plan: Nominate Chuck Hagel for maximum lulz. Mike DeBonis and Juliet Eilperin: "Brian Sandoval, the centrist Republican governor of Nevada, is being vetted by the White House for a possible nomination to the Supreme Court, according to two people familiar with the process. Sandoval is increasingly viewed by some key Democrats as perhaps the only nominee President Obama could select who would be able to break a Republican blockade in the Senate. Senate Majority Leader Mitch McConnell (R-Ky.) on Tuesday pledged “no action” on any Supreme Court nomination before November’s election, saying the decision ought to be left to the next president...But at least three key Republican senators -- all on the Judiciary Committee that is charged with considering a Supreme Court nominee -- said that a Sandoval nomination wouldn’t change their decision not to consider Obama’s nominee." [WaPo] 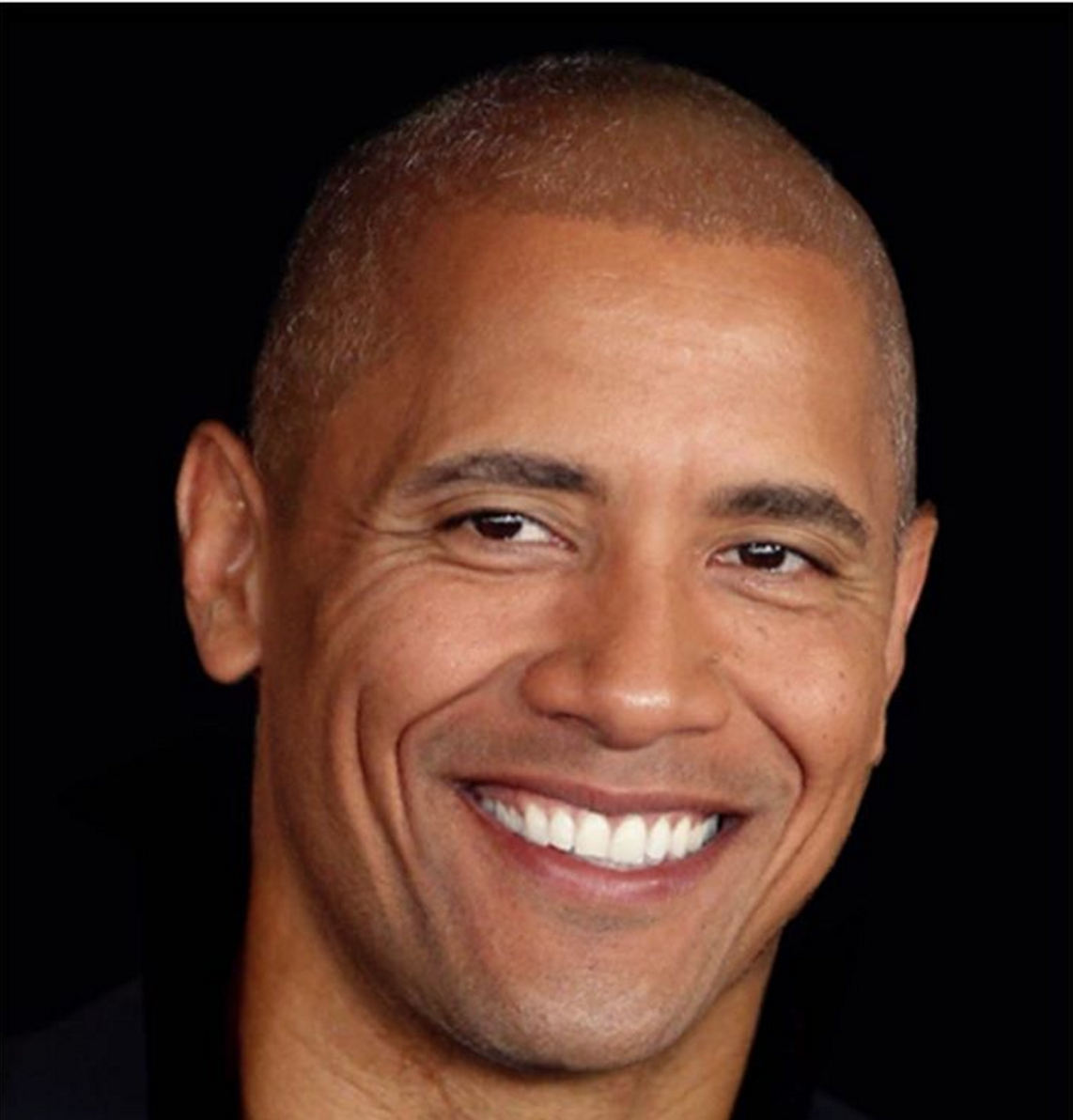 Where does The Rock end and Obama begin? We don't know.

MEMBERS OF CONGRESS FINALLY ENDORSE TRUMP - And here we were hoping that Nancy Pelosi would be the first. Buffalo News: "Rep. Chris Collins, a mainstream Republican from Clarence, on Wednesday became the first sitting member of Congress to endorse bombastic billionaire Donald Trump for president. 'Donald Trump has clearly demonstrated that he has both the guts and the fortitude to return our nation’s jobs stolen by China, take on our enemies like ISIS, Iran, North Korea and Russia, and most importantly, re-establish the opportunity for our children and grandchildren to attain the American Dream,' Collins said in a statement released first to The Buffalo News. 'That is why I am proud to endorse him as the next president of the United States.' Collins had previously endorsed former Florida Gov. Jeb Bush, who ended his bid for the nomination after a disappointing fourth-place finish in Saturday’s South Carolina primary." [Buffalo News]

NO ONE WANTS MICHAEL BLOOMBERG TO BE PRESIDENT - Probably because they're just holding out for Joe Scarborough's No Labels-backed campaign for the job. Jonathan Lemire and Emily Swanson: "By wide margins, Americans of all ideologies say they have no interest in voting former New York Mayor Michael Bloomberg into the White House, suggesting that the billionaire media mogul would have significant headwinds should he mount a third-party bid for president. Just 7 percent of registered voters say they definitely would vote for him, while 29 percent say they'd consider it, according to a new Associated Press-GfK poll. 'Isn't he the one who wanted to restrict the size of soda drinks?' asked Patricia Kowal, a 66-year-old Democrat who works on an assembly line and lives in Lublin, Wisconsin. 'I think that's intruding on people's personal choices. It's none of the government's business.' A court blocked Bloomberg's attempt to ban supersize takeout soda in 2014. Six in 10 Democrats and Republicans alike say they would not consider voting for Bloomberg in a general election, according to the poll. The total saying they wouldn't vote for him is the highest level for any candidate in the field." [AP]

BECAUSE YOU'VE READ THIS FAR - Here's a puppy playing dead.

- The "Imperial March" from "Star Wars" played in a major key is much happier.

- The story behind "Handsome Grandpa."

- The sexiest professions, according to Tinder.

@SonnyBunch: Somewhere Brian Sandoval’s like “hey leave me out of your trolling, dicks."

@anamariecox: Looking forward to next NYT poll of Trump voters! “Women: chattel or no?” “Earth—is it round?" “Is TV really tiny people inside a box?”