One year ago, people were gawking at escaped llamas and squabbling over whether a dress was blue or white; today two grown men running for president accused each other of poor bladder and/or glandular control -- the more things change, y’know? Conservative donors are exploring a possible independent bid by a conservative with no regard for the wellbeing of the GOP -- so Ted Cruz. And back in 2013, commentators said the media's fixation on Marco Rubio’s water bottle incident was trivial and would have no political impact. Well, they were right about the first part. This is HUFFPOST HILL for Friday, February 26th, 2016:

Thanks to everyone who pre-ordered Eliot's book . Per Amazon, "The Beltway Bible: A Totally Serious A-Z Guide To Our No-Good, Corrupt, Incompetent, Terrible, Depressing, and Sometimes Hilarious Government" is the "#1 New Release in Political Humor." To say "thank you," here's some news about Donald Trump:

CHRISTIE ENDORSES TRUMP - A bigly bigly bigly endorsement for Trump. Christina Wilkie: "In a surprise move on Friday, New Jersey Gov. Chris Christie (R) endorsed Donald Trump for president … Christie stressed what he views as Trump's electability, saying the billionaire is 'someone who is going to lead the Republican party to victory in November over Hillary Clinton, which is the single most important thing we can do.' Christie also took the opportunity to attack Sen. Marco Rubio (R-Fla.), who landed a few punches on Trump in Thursday night's GOP debate. Rubio upped the ante Friday morning, calling Trump a 'con artist.' … While the Trump endorsement was certainly a surprise, it was not a total about-face for Christie. The pugnacious New Jersey governor avoided directly attacking Trump while the two men were running for president, a choice that left some people scratching their heads." [HuffPost] 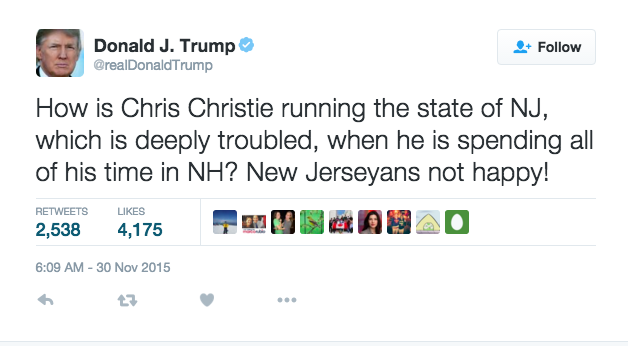 And here's a look back at Christie's views of Trump.

THE CAMPAIGN HAS BECOME A LITERAL PISSING MATCH -- REALLY, THEY'RE TALKING ABOUT URINE - We shall troll on the beaches, we shall troll on the landing grounds, we shall troll in the fields and in the streets, we shall troll in th -- Brett LoGiurato: "Telling supporters in Dallas that he wanted to have a 'little fun,' Rubio took out his phone at the rally and proceeded to read Trump's Friday-morning tweets in which he attacked Rubio… Rubio then referred to Trump's dubbing of Rubio as 'Mr. Meltdown.' He said that during the commercial breaks it was actually Trump who was melting down amid Rubio's attacks. 'First, he had this little makeup thing, applying makeup around his mustache, because he had one of those sweat mustaches,' Rubio said. 'Then he asked for a full-length mirror. I don't know why, because the podium goes up to here,' Rubio said, motioning to his chest. Then he deadpanned: 'Maybe to make sure his pants weren't wet. I don't know.'" [Business Insider]

DELANEY DOWNER - Residents of Flint, Michigan, will get refunds on their water bills as repayment for the government's failure to keep the water safe, Gov. Rick Snyder (R) announced Friday. 'Flint residents should not have to pay for water they cannot drink,' Snyder said in a release. The water won't be free, however -- just less expensive….Flint residents have been paying the highest water bills in the nation, according to a survey by an environmental nonprofit called Food & Water Watch. Nationally, the average annual bill was $316 in January 2015, compared with $864 for Flint. [HuffPost]

A NATION TURNS ITS LONELY EYES TO YOU, UNNAMED INDEPENDENT CANDIDATE - Scott Bland: "Conservative donors have engaged a major GOP consulting firm in Florida to research the feasibility of mounting a late, independent run for president amid growing fears that Donald Trump could win the Republican nomination. A memo prepared for the group zeroes in on ballot access as a looming obstacle for any independent candidate, along with actually identifying a viable, widely known contender and coalescing financial support for that person. The two states with the earliest deadlines for independent candidates, Texas and North Carolina, also have some of the highest hurdles for independents to get on the ballot, according to the research." [Politico]

RUBIO TRIES TO WOO DONOR CLASS - Jeremy Peters: "Mr. Rubio is making the most concerted effort to court them as a constituency. His appeal among the well heeled is evident in his choice of sites for campaign rallies: resorts on Hilton Head Island, country clubs in Iowa and New Hampshire, a prep school in the South Carolina Lowcountry. He often confines his campaign travel to the affluent suburban and exurban communities around cities like Nashville and Charleston, his campaign bus rolling through neighborhoods with sprawling homes that hide behind hedges and high walls. And the numbers show why. Exit polls found that while he has yet to win a single state outright, in some contests Mr. Rubio has beaten his rivals among voters who earn more than $100,000 and those whose education has continued beyond college." [NYT]

Great trolling from the DNC at the Rubio rally in Dallas, via @SeanCWalsh (document here) .

HOW CANDIDATES GAIN (AND LOSE) SECRET SERVICE PROTECTION - Keeping our Fruit Salad candidate pool safe. Olivier Knox: "The aspiring commander in chief requests protection from the Homeland Security secretary, who makes the decision in consultation with a special committee made up of top congressional leaders of both parties. ... The candidate must have received at least $10 million in contributions. ... The candidate must be competing in at least 10 state primaries. And the candidate must 'have some degree of prominence as shown by opinion polls.' (That prominence is set at 5 percent.) Could a failing candidate lose his Secret Service protection if he drops to negligible levels in the polls? Could Ben Carson -- whose slumping campaign I recently heard mocked as 'the best-defended book tour in America' -- be forced to say goodbye to the besuited men and women with earpieces and guns who have surround him for months? The short answer, according to two people intimately familiar with the process, is no." [Yahoo News]

NOTHING PREVENTING TRUMP FROM SHARING TAX INFO: IRS - IRS tries to slam Donald but lousy worker prosecute Christians. Sad! Sam Levine: "Republican presidential candidate Donald Trump said during Thursday's GOP primary debate that he can't release his tax returns because he is currently being audited by the IRS, but the agency says nothing prevents individuals from sharing their tax information. 'Federal privacy rules prohibit the IRS from discussing individual tax matters. Nothing prevents individuals from sharing their own tax information,' the IRS said Friday in a statement. While the IRS says anyone can release their own tax information at any time, some tax lawyers advised it may not be in an individual's best interest to do so." [HuffPost]

David Duke vote locked down: "A white supremacist super PAC is rolling out a fresh robocall campaign this week in Vermont and Minnesota telling voters, “Don’t vote for a Cuban. Vote for Donald Trump.' In a recording of the robocall sent to TPM, American National Super PAC founder William Daniel Johnson calls on white Americans to brush aside their fears of being branded as racist and stop the “gradual genocide against the white race” by electing Trump." [TPM's Allegra Kirkland]

BECAUSE YOU'VE READ THIS FAR - Here's a video alerting us to cruelty against robots.

DRAMA AT MSNBC - Great window for a Shuster comeback. John Koblin: "Melissa Harris-Perry said she was refusing to go on the MSNBC show she hosts this Saturday, following several weeks of pre-emptions and what she described as a loss of editorial control. In an email sent to people she works with this week, which was obtained by The New York Times, Ms. Harris-Perry said that her show had effectively been taken away from her and that she felt 'worthless' in the eyes of NBC News executives. 'Here is the reality: Our show was taken -- without comment or discussion or notice -- in the midst of an election season,' she wrote. 'After four years of building an audience, developing a brand and developing trust with our viewers, we were effectively and utterly silenced.' In a phone interview, Ms. Harris-Perry confirmed she would not appear on the show this weekend. " [NYT]

- Looking back at the internet's strangest day.

- Trailer of a film shot to look like a Van Gogh painting.

@dennisrodman: Yes @tedcruz; @realdonaldtrump did fire me on Celebrity Apprentice. But he's about to fire your ass too! #MakeAmericaGreatAgain

@joshgreenman: Members of Media, Who Presumably Have Power to Influence News Cycle, Commend Candidate for Smartly Dominating Another News Cycle