Ted Cruz probably won't win the Republican nomination, though he can take solace in the fact that he would totally crush the Iron Islands’ Kingsmoot. Bernie Sanders supporters are still holding out hope that their candidate can win over super delegates — that or the Large Hadron Collider folks had better make a major time-space continuum breakthrough and fast. And Donald Trump accused Cruz’s father, Rafael, of involvement in JFK’s assassination, which could complicate the investigation into whether the elder Cruz also has Mitt Romney’s tax returns. This is HUFFPOST HILL for May 3rd, 2016: 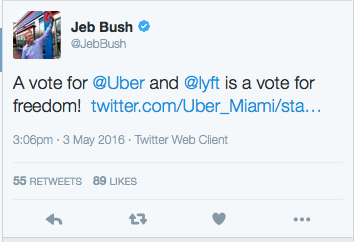 Hang in there, Jeb!

OUR LONG NATIONAL CRUZ-BASED NIGHTMARE POSSIBLY OVER - Natalie Jackson, Janie Velencia and Ariel Edwards-Levy: "The HuffPost Pollster average shows Donald Trump leading Texas Sen. Ted Cruz by 14 points, 43 percent to 29 percent. Trump leads in almost every poll, by margins ranging from 5 points to 17 points. The exception is a survey conducted by the Mike Downs Center for Indiana Politics at Indiana-Purdue University Fort Wayne (IPFW), which shows Ted Cruz leading by 16 points. That poll seems to be an outlier, though, and the pollsters didn’t apply standard demographic weights to the data...Six polls in the Democratic race all show Hillary Clinton leading Vermont Sen. Bernie Sanders, but by a relatively small margin. Clinton leads Sanders by about 7 percentage points in the HuffPost Pollster average, taking 51 percent to his 44 percent. Most of the polls show her lead in the single digits. The one exception is the same IFPW poll that is an outlier on the Republican side, which shows Clinton leading by 15 points." [HuffPost Pollster]

End of the line: "More than a half-dozen Republicans involved in the pro-Cruz and anti-Trump push told POLITICO that Indiana is crucial for Cruz to keeping the cash flowing, as skittish donors have grown weary after a string of recent losses...His camp, expressing pessimism over the Texas senator's chances, is bracing for staff cuts 'at a minimum' if he loses Indiana, an aide told the Associated Press on Tuesday. Cruz's campaign manager Jeff Roe, however, tweeted that the AP report is 'dead wrong.' … The loss could cost Cruz one of his last remaining advantages: Millions in ad support from groups like the Club for Growth, Our Principles PAC and the pro-Cruz Trusted Leadership PAC." [Politico's Shane Goldmacher]

COUNTRY FIRST - Alex Seitz-Wald: "A former top aide to Sen. John McCain says he will support Hillary Clinton over Donald Trump in November as both candidates appear close to locking down their parties’ nominations. Mark Salter was for years McCain’s closest aide, serving as strategist, speechwriter, Senate chief of staff and biographer to the 2008 Republican presidential nominee. But now, Salter says he’ll break with the Republican Party if it nominates Trump and vote for Clinton instead. 'Basically, I think she’s the more conservative choice and the least reckless one,' Salter told MSNBC in an email." [MSNBC]

DELANEY DOWNER - Here is some bleak crap that could be one of those fake "viral videos" but we suspect is real because of how miserable it is: "Video posted on YouTube shows a woman at a Walmart store loudly berating a man who was paying for his groceries with food stamps. As a child sits in the man’s shopping cart looking on, the woman complains about how she is paying for his food with her tax money. 'You know, I put in 50-60 hour weeks... trying to provide for my family,' the man says, although some of his words are unclear. 'You’re not providing for it, I am,' the woman snaps back. 'The government is.'" [HuffPost's Ed Mazza]

REALLY, IT'S ONLY A MATTER OF HOURS UNTIL TRUMPS PLAYS THE ZODIAC KILLER CARD - Also, "Zodiac Killer card" is something we never thought we'd write. Sopan Deb: "In the latest unsubstantiated claim from GOP front-runner Donald Trump, the business mogul is suggesting that Rafael Cruz, the father of Ted Cruz, was involved with Kennedy assassin Lee Harvey Oswald. 'You know, his father was with Lee Harvey Oswald prior to Oswald's being -- you know, shot,' Trump told 'Fox and Friends' Tuesday. 'I mean, the whole thing is ridiculous. What is this?' Trump continued: 'Right prior to his being shot and nobody even brings it up. I mean, they don't even talk about that. That was reported and nobody talks about it.'" [CBS News]

CRUZ HOPING SOMETHING STICKS - Ian Swanson and Jonathan Easley: "Ted Cruz laid into Donald Trump with his most personal and toughest criticism since the GOP presidential campaign began, calling him a 'pathological liar' on Tuesday who doesn't understand the difference between the truth and lies. Cruz prefaced his comments by saying that for the first time, he wanted to say exactly what he thought of Trump after the front-runner suggested Cruz's father might have had something to do with the assassination of President John F. Kennedy…[said Cruz,] "“This is not a secret, he’s proud of being a serial philander. I want everyone to think about your teenage kids. The president of the United States talks about how great it is to commit adultery. How proud he is, describes his battle with venereal disease as his own personal Vietnam. That’s a quote from the Howard Stern show." [The Hill]

TRUMP DISCOVERS DIGITAL - "Sir, it appears that 'pathetic' plays significantly better amongst 22-35 unmarried men than 'loser.'" Nick Corasaniti: "Mr. Trump’s campaign has joined Twitter’s regional ad targeting, having four of his posts appear in the feeds of selected Twitter users in Indiana, regardless of whether they are followers of the candidate…Mr. Trump also spent money to promote what might be his favorite Twitter activity, needling his opponents, as he did in one post that included a video of Carly Fiorina criticizing Senator Ted Cruz as just 'any other politician.' The post was aimed at fans of Mr. Cruz and of his new running mate, Ms. Fiorina. Those two posts, along with two others being promoted regularly in the state, have lifted Mr. Trump’s already extensive social media reach, earning him more than a half million views for those two videos in the last few days alone, according to data provided by Twitter." [NYT]

[Extremely 90s standup comic voice] And don't even get me started about directions, right? [/Extremely 90s standup comic voice]: "Evolving Strategies, a Republican data and analytics firm, recently tested the effectiveness of four anti-Trump TV ads ahead of Indiana's primary on Tuesday. The results showed a deep split between the sexes … Three of the four spots convinced a significant number of women — eight percent of those tested — to abandon the Republican front-runner. But those ads didn't work with men. The percentage of men who supported Trump didn’t waver even after viewing each of the four ads, the analysis found." [Roll Call's Alex Roarty]

FORMER NY ASSEMBLY SPEAKER GETS 12 YEARS - Surprising that the U.S. attorney didn't also pursue charges of New York values. Benjamin Weiser and Vivian Yee: "Sheldon Silver, who rose from the Lower East Side of Manhattan to become one of the state’s most powerful and feared politicians as speaker of the New York Assembly, was sentenced on Tuesday to 12 years in prison in a case that came to symbolize Albany’s culture of graft. The conviction of Mr. Silver, 72, served as a capstone to a campaign against public corruption by Preet Bharara, the United States attorney for the Southern District of New York, which has led to more than a dozen state lawmakers’ being convicted or pleading guilty...Mr. Silver had served for more than two decades as the Assembly speaker, imposing his will on matters large and small; he had a reputation as a staunch defender of New York City, a shrewd negotiator at budget talks, and, at times, a recalcitrant opponent of anything he disliked...Evidence showed that he had obtained nearly $4 million in illicit fees in return for taking official actions that benefited a prominent cancer researcher, Dr. Robert N. Taub, at Columbia University, and two real estate developers, Glenwood Management and the Witkoff Group." [NYT]

BECAUSE YOU'VE READ THIS FAR - Here's a tortoise living in Jurassic Park.

RICK SNYDER WOULD LIKE TO PROPOSE A TOAST TO THE PRESIDENT - Michigan Gov. Rick Snyder (R) hopes President Barack Obama has a drink when he visits Flint on Wednesday. Snyder has been trying to get Flint residents to trust Environmental Protection Agency assurances that their water is safe to drink when it’s filtered. "We are hopeful the president will drink the water in Flint, to help reinforce Gov. Snyder’s actions and the EPA’s message that filtered Flint water is safe to drink," Snyder spokeswoman Anna Heaton told The Huffington Post in an emailed statement. Testing shows unfiltered Flint water is still dangerous. High lead levels have poisoned residents’ taps since the city started pumping from the Flint River in April of 2014 and failed to treat the water correctly. To demonstrate the effectiveness of filters, Snyder drank from a Flint resident’s tap last month. He vowed to continue to drink the city’s water for at least 30 days. [HuffPost]

- A number that's illegal to write down.

@SimonMaloy: CRUZ: nice to meet you
VOTER: what's your position on updog?
CRUZ: well, only when a true conservative wins the
VOTER: actually, forget it

anamariecox: After stalking polling places all day I can sum up the logic of those voting for Trump as “Yeah, so?”