We live in a time of international crisis and conflict: from the European financial crisis, which is robbing millions of young people of their future, to the conflict with Russia and finally to the bloody rise of ISIS.

All this is dominating the news coverage worldwide. But the Huffington Post does not only want to report about dramatic developments. The growing HuffPost network also wants to put people and organizations that help solve problems in the spotlight.

The Huffington Post is now active in 12 countries, after the Greek edition went live last month. But this is also only a preliminary number because the site keeps expanding to new countries. Shortly, our colleagues in India will be launching their site, and at the beginning of next year, the Huffington Post will also have an Arabic edition.

Our goal is a global network, with editors and thousands of bloggers who address topics which move people in their everyday lives. And this network continues to grow more and more.

The European editions of the Huffington Post are organizing interviews with well-known politicians. Just last week, HuffPost Germany had an interview with the speaker of the EU Parliament, Martin Schulz, which we arranged together with our European colleagues. In an interview with our British colleagues, the prominent EU politician spoke out clearly: "If the responsible politicians, especially the heads of state in the European Council, continue to say the success is national but the failure European, then we should not be surprised that the European Union has an image problem."

A few days earlier, the president of Greece, Karolos Papoulias, strongly criticized representatives of the EU commission, the International Monetary Fund and the European Central Bank, saying, the Troika is acting "as if they are speaking to rocks and not people." An interview by our Greek colleagues with the president will make you think. In a long series of articles, the European editions of the Huffington Post are examining the effects that European austerity politics have. The lesson is clear: states are also not able to live above their means. But the current path will not lead to the desired result. And it's not only livelihoods that are endangered, but also thousands of lives.

Such interviews and series are being coordinated through regular conferences between all international HuffPost editors-in-chief. The most interesting pieces are then translated by our American colleagues, and are in return picked up in other countries, like HuffPost Germany's recent portrait of Vladimir Putin.

The international blog teams are also growing more and more together -- and cooperating on joint projects. Recently, the filmmaker who chased leftist politician Gregor Gysi across the Bundestag explained in a blog post how he got into this risky project. The lesson he learned: he would do it over and over again. The stunt provoked a huge media response.

Apart from the topics conferences between the chief editors, those responsible for sections such as politics, lifestyle or social media meet regularly in international brainstormings. In sometimes only 30-minute video conferences, topics and cooperations are decided on and set into motion.

This international network is also of use to our guest contributors. Wolfgang Schäuble's blog post about the anniversary of the fall of the Berlin Wall appeared in many different Huffington Post editions, as did Jürgen Trittin's post about dependency on Russian gas, which was even translated by our Japanese colleagues. Something similar happened with an article by Mikhail Gorbachev, who warned Huffington Post readers about the possibility of a new Cold War. All this helps ideas spread around the globe. And that is what we aspire to: a global news and discussion platform. 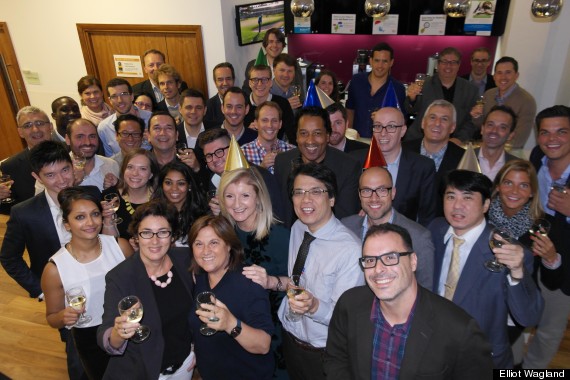