WASHINGTON -- The Republican establishment inside the Washington Beltway may be pining for new candidates to enter the race for president, but two-thirds of influential local Republicans surveyed by The Huffington Post and Patch in the early primary and caucus states are satisfied with their choices. And while Sarah Palin is gearing up for a major speech in Iowa, just 8 percent want her to run.

Sixty-three percent of the 169 influential Republicans surveyed in Iowa, New Hampshire and South Carolina in our second HuffPost-Patch Power Outsiders poll say they are satisfied with the candidates now running for president, while just 36 percent say they want to see more candidates get into the race.

When asked which individuals, if any, they would like to see join the race, our Power Outsiders were most likely to mention New Jersey Gov. Chris Christie (31 percent of respondents), followed by Wisconsin Rep. Paul Ryan (17 percent). In the midst of our survey, Ryan announced Monday that he will not run for president next year. 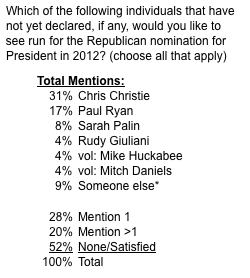 While many would like to see either Christie or Ryan run, far fewer named former Alaska Gov. Sarah Palin (8 percent) or former New York Mayor Rudy Giuliani (4 percent), even though our question prompted for all four names. Nearly as many volunteered Indiana Gov. Mitch Daniels (4 percent) or former Arkansas Gov. Mike Huckabee (4 percent), both of whom declared earlier this year that they would not enter the race.

Roughly 12 percent said they were satisfied with the current crop of candidates and still offered the name of someone they would like to see enter the race. While only 36 percent said they were not satisfied with the announced candidates and would "like to see more candidates," 48 percent named at least one noncandidate they would like to see run. Their views are best summarized by the New Hampshire Republican who said, "[I'm] satisfied, but the more options the better."

The results come from the second in a series of weekly surveys designed to tap the deep reporting resources of the AOL Huffington Post Media Group in the three early GOP voting states. These nonscientific samplings of Republican party leaders, elected officials and political activists in the early primary and caucus states are an attempt to cover the "invisible primary" among party insiders that typically has great influence in the presidential nomination contests. While the surveys are not representative of a larger population, they constitute an extensive and systematic effort to monitor the opinions of Republican activists and party leaders in the early voting states.

This week, we reached out to roughly 240 influential Republicans in Iowa, New Hampshire and South Carolina and received responses from 169, including 34 from Iowa, 63 from New Hampshire and 72 from South Carolina. (We asked respondents to allow us to publish their names as participants, and those names appear below, but we will report results in aggregated form only.)

We also gave respondents an opportunity to respond in their own words, and those satisfied with their choices seem impatient with those pining for a "perfect" candidate and eager to get on with the campaign:

I don't think there's anyone (whether a declared or a potential candidate) that's going to completely unite the GOP this year. Wishes for a hypothetical candidate who could unite the party aren't helpful since such a person does not exist.

The current field of candidates, while not perfect (Who is? Except Barack Obama - and even the Democrats are wondering about him.) is very strong. They are experienced and successful political and business professionals. Men, women, younger, older, black, white, Governors, Senators, Congressmen, what more could you want?

The problem is when you have a polarized environment is that you have individuals who will only be satisfied with a "perfect" candidate and there is no such thing. People need to look at the record and listen to what they say and get behind the BEST candidate.

We have a very strong field of GOP candidates now. While each may have some flaws, any one of them could make a very capable president.

Tired of the rampant speculation, endless drama. Given the current state of our Nation and the current candidates putting forth plans, to further dilute the attention of the electorate would likely muddle the decision making process along with continuing to make vetting candidates a more difficult task.


While many GOP Power Outsiders would welcome the entry of a Christie or a Ryan, most we talked to are satisfied with the choices before them. The inside-the-Beltway Republican establishment may differ, but most of these influential Republicans at the grass roots are ready to choose from the candidates now in the race.

All of the individuals listed below have agreed to participate in the Power Outsiders surveys, although not all responded to this week's questions. Update (1:46 p.m. EST): The list has been corrected from the original version.