You may have noticed a new badge popping up in the comments section and on Social News profiles. To go along with our Superuser, Networker and Community Moderator Badges, we've added Pundits to the mix.

Being a Pundit comes with privileges. Besides having their comments highlighted in the Highlights tab and the Community Pundits box, we also allow our Pundits to leave longer comments.

As you'll see, the political commentary from our Community Politics Pundits springs from all points on the ideological spectrum. In the same way that our Community Moderators and comment moderation staff never moderate based on politics viewpoints, we don't award Pundit Badges based on whether we agree or disagree with that commenter's opinion.

We look at our Community Pundits as conversation starters. They are being recognized for driving discussions and adding value to our news coverage -- regardless of their political leanings. 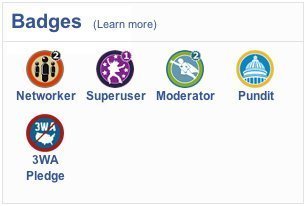 While I'm on the topic of engagement and good commenting, here are a few tips on how to make your comments more engaging.

1. Drive discussions around the news. HuffPost Comments are driven by neither our editors nor our staff moderators. They're driven by you, our readers. While we work hard to moderate the comments in order to keep the discussion civil and create a non-toxic atmosphere, we do love to keep things lively. As a result, we encourage those commenters who ask hard questions and make provocative statements. Sometimes this is as simple as highlighting a point made or even by urging other readers to read more closely. That's exactly what commenter siamao did in asking for a closer reading of a New Yorker article that we linked to:

Folks, here's our dilemma. If you read the full "New Yorker" article, you'll find that it's
extremely well written, but scary as h*ll. I tried to summarize one small half-page
which talked about the Koch Brothers and their attempts to sabotage the Obama
Administration and "destroy progressivism."


2. Make fact-based arguments. If you think about our comment section as an extension of the news story it accompanies, some of the most valuable comments in any given thread are those that contribute new facts to that article or that challenge the article's existing claims. In making your argument, be sure to cite sources and include links where other readers can learn more about the facts. Here's a great example from commenter supergenius02 that's critical of President Obama's campaign reform plan and provides additional reading to back up the argument:

Anyone who actually believes Obama is serious about limiting corporate and union politcal ads spending needs to have their heads examined. Obama and the Democrats exist on big money spending in support of them. Obama alone has gone on 38 political fundraisers just this year alone where tickets for wealthy individuals and corporations & unions cost up to $30,000 a plate with an average haul of $1 million each. http://latimesblogs.latimes.com/washington/2008/11/obama-money.html

3. Work around a thesis. Along the same lines as making fact-based arguments, it's also compelling to formulate a thesis and keep your comments focused. Highlighting that thesis or point right away will set the tone for the rest of the conversation, and being consistent in arguing the original point around facts will also help keep other commenters in the thread on topic. That said, we always encourage our community to build arguments around a point, not a person. Check out this great point made by commenter realitytrumpsbull in reaction to the article "Border Patrol Suicides On The Rise":

Is it an important job? Arguably, yes. Should people take vacations periodically, when doing this kind of work? Most definitely. I think being a member of the Border Patrol probably has similar stressors as reported by other people working in law enforcement. Nobody wants to see you coming, because you're The Man, that kind of thing. Well, maybe some people DO like to see the fact that there's someone on the job, keeping the peace, upholding the law, you're talking about a part of the country that was the Wild Wild West for a long time, where it was gun battles and violent rivalries and turf wars, water wars, and now drug wars.

On a related note, sometimes readers have trouble posting their comments. While we use a combination of tools to help moderate the millions of comments we publish monthly, our staff does make mistakes from time-to-time. If you're ever having trouble, please email community-support@huffingtonpost.com with your username and a link to the comment thread. We'll do our best to explain why the comment was deleted or fix the error.

We want to hear your thoughts about the Pundit Badge, other Badges, or HuffPost Comments generally -- let us know in the below comment thread. I'll do my best answer as many questions as I can right in the thread. So fire away!