A huge complex uncovered near what some believe to be the Biblical birthplace of Abraham is exciting researchers who for years were unable to investigate the region.

The site was discovered by a team of British archeologists working at Tell Khaiber in southern Iraq, near the ancient city of Ur, according to the Associated Press.

Stuart Campbell, a professor of Near Eastern Archaeology at Manchester University and head of its Department of Archeology, told the AP that the site is unusual because it's so large. (It's about the size of a football field.)

"This is a breathtaking find and we feel privileged to be the first to work at this important site," Campbell said, according to Phys.org. "The surrounding countryside, now arid and desolate, was the birthplace of cities and of civilization about 5,000 years ago and home to the Sumerians and the later Babylonians."

Discovery of the site was first made via satellite, according to Phys.org, followed by a geographical survey and trial excavations. Campbell said the site is provisionally dated to 2,000 B.C.

In an email to The Huffington Post, Campbell said researchers will use modern technology to help better understand that time period.

"Because of the gap in archaeological work in this region, any new knowledge is important to archaeologists in this area – and this find has the potential to really move forward our understanding of the first city-states," Campbell wrote.

National Geographic notes that Ur probably originated "sometime in the fifth millennium B.C." and was discovered in the 1920s and 1930s after an expedition. Once a commercial hub, Ur is also believed by many Biblical scholars to be the birthplace of Abraham.

Abraham, a descendant of Noah, is often described as the "spiritual father of Jews, Christians, and Muslims," Slate notes. The Old Testament includes references to Abraham's family members and a place called Ur of the Chaldeans. Some scholars have pointed to this as evidence that Ur was once Abraham's home.

Campbell notes that there are alternative theories to Abraham's birthplace, although Ur is commonly identified as the site. The archeologist added that his team is still excavating the complex.

The fact that Campbell's team was able to work at the site at all is good news for researchers. For decades, culturally rich sites like Ur lay untouched due to unrest. Some sites were looted, and others were damaged by war, according to USA Today. 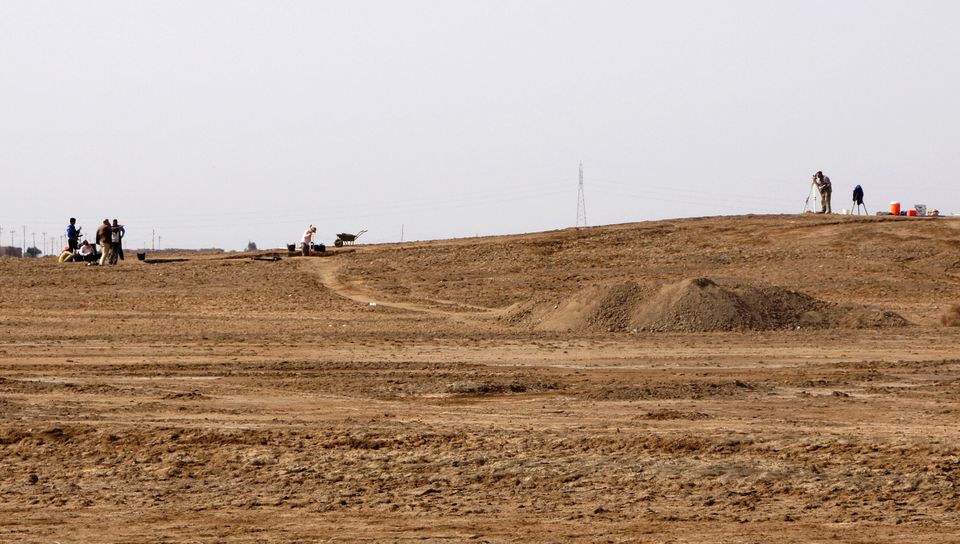 1 / 3
This photo taken on March 31, 2013 provided by Manchester University archaeologist Stuart Campbell shows excavation in progress at Tell Khaiber, Iraq. A British archaeologist says he and his colleagues have unearthed a huge, rare complex near the ancient city of Ur in southern Iraq, home of the biblical Abraham. Stuart Campbell of Manchester University's Archaeology Department says it goes back about 4,000 years, around the time Abraham would have lived there. It's believed to be an administrative center for Ur.
Stuart Campbell / AP