Scientists are calling it the Jimmy Durante of Dinosaurs.

Not because of its talents as a jazz pianist, but because -- like Durante -- the newly-identified dinosaur Rhinorex condrupus had quite a large nose. 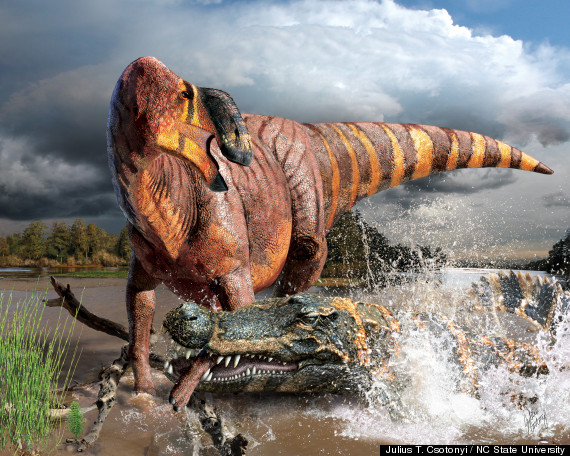 Paleontologists Dr. Terry Gates, a postdoctoral researcher with NC State and the North Carolina Museum of Natural Sciences, and Dr. Rodney Scheetz, a researcher at the Brigham Young University's Museum of Paleontology, uncovered the duck-billed dino, a hadrosaur, in storage at BYU.

Though the dinosaur was originally excavated from Utah’s Neslen formation in the 1990s, Gates and Scheetz were the first to reconstruct the skull fully, at which point they realized they'd found a new species.

"We had almost the entire skull, which was wonderful,” Gates said in a written statement, “but the preparation was very difficult. It took two years to dig the fossil out of the sandstone it was embedded in –- it was like digging a dinosaur skull out of a concrete driveway."

The researchers estimate Rhinorex (which roughly means "King Nose") was around 30 feet long, weighed more than 8,500 pounds, ate plants, and lived in a swampy coastal environment.

As for that nose -- well, its actual function remains a bit of a mystery.

"If this dinosaur is anything like its relatives then it likely did not have a super sense of smell," Gates said in the statement, "but maybe the nose was used as a means of attracting mates, recognizing members of its species, or even as a large attachment for a plant-smashing beak. We are already sniffing out answers to these questions."

An article describing the new research was published in the Sept. 17th issue of the Journal of Systematic Paleontology.