So sorry, that it rushed representatives down to Austin this weekend to apologize, repeatedly, to 200-plus Dad bloggers gathered at their first ever convention, called Dad 2.0.

The company thought it had a winner of an ad campaign -- a series of spots all filmed during five days spent in a house with real dads and their babies. "To prove that Huggies diapers and wipes can handle anything," the female voice-over explains, "we put them to the toughest test imaginable -- Dads."

The marketers at Kimberly-Clark, which owns Huggies, figured it was a combination that couldn't miss. It showed fathers parenting! It included adorable babies! It was light-hearted and fun, what with those poor hapless dads responsible for their own children for five whole days!

After all, marketers knew, men behaving like actual parents is the "new" thing in advertising (I use the quotation marks because we have seen waves of this before, so perhaps we should say it's the latest rediscovery of a new thing.) Clorox shows cool Dads making a wildly fun mess with the kids and then, quite matter of factly, doing the laundry. Apple shows a brand new Dad shattered that the hundreds of photos of his baby's life are lost when he loses his iPhone, only to remember that they are in the cloud. Jetta chronicles a boy growing into a man, replacing backpack with baby carrier, and evolving from asking "Is it fast?" to "Is it safe?" Microsoft's ad has Dad grocery shopping while his giggling kids are back home remotely adding items like candy and chocolate cake to his list.

Embracing this trend -- Dads doing Mom stuff! -- Huggies figured they would charm women (who purchase 75 percent of all diapers) and possibly convert a few men (who buy five percent; the other 20 percent are joint purchases.) What they didn't take into account, however, was another trend -- the one where the growing number of men who consider themselves involved, equal parents (according to the US Census, one in three are their child's primary caregiver) are more than a little sensitive about being portrayed a the butt of an advertiser's joke.

Which is how more than a few men interpreted the Huggies series of ads, particularly the one in which the fathers are so involved watching TV sports that they appear to ignore their babies' overflowing diapers. The addition of an invitation to Moms on the brand's Facebook page, suggesting that they "Nominate a Dad ... Hand him some diapers & wipes and watch the fun ... Tell us how it went on Facebook!" certainly amplified the impression that Dads were being mocked.

The reaction was swift. Taking a page from the mothers who rose up against a Motrin ad a few years ago that some saw as insulting to "baby-wearing parents", fathers (and a few mothers) filled the Huggies Facebook Wall with complaints. "Thanks for contributing to the perception that fathers are incompetent parents who let babies lay around in their own waste until they can be rescued, was one typical comment. Another: "The narrow view of gender roles...hurts dads AND moms. We should all be free to fill our family roles in the way that makes sense based on our skills and interests, not on some antiquated, stereotypical gender binary."

Soon, there was a petition. Created by Chris Routly, a father from Breiningsville, PA, it was titled "We're Dads, Huggies. Not Dummies." And it said:

Why is a dad on diaper duty an appropriate or meaningful test of the product in any way a mom using them is not? Why reduce dads to being little more than test dummy parents, putting diapers and wipes through a "worst-case scenario" crash course of misuse and abuse? Is that what HUGGIES thinks dads do? We leave our children in overflowing diapers because sports is more important to us? Really?

And there were more than a few suggestions of what Huggies could do with their series of ads. Jim HIgley wrote on the blog of The Good Men Project:

Swap out a couple of those chairs with moms. So you've got a room full of moms and dads (collectively, we call them "Parents.") ... Get over the gender thing, will ya, Huggies? Because, as best as I can tell from all the comments you're ignoring on Facebook, most of us parents have been over the gender thing for years.

Huggies did not take all that advice. What it did was pull one of the series -- the one with the men watching sports. (I can't show it to you because the company may not be perfect at reading its intended customer, but it is dynamite at scrubbing all links from the internet.) It replaced that one with this, a spot about babies napping happily on their dads' chests, though, for the moment at least, it carries the same "dads...put diapers to the test" message.

That tagline will change soon, promises Aric Melzl, the brand director for Huggies, who rushed from Wisconsin to appear at the conference, where the snowballing Dad-blog movement was gathered in one place.

Huggies loves and respects fathers, he assured me during a day spent mending fences and smoothing feathers with any blogger who would listen. This ad campaign was meant to be a "celebration" of Dads who ably care for kids, he said, but "clearly our intent wasn't coming through." Himself the father of three children, ages 9, 8 and 5, he knows first hand that "dads are doing that more and more, and we thought this was a great way to shine a light on that," he said. "But that doesn't seem to have been the takeaway for many dads."

And what was the takeaway for the company?

"That the social media space is a great way to get immediate feedback," he said.

Why all this effort, I asked him. After all, by the company's measure, men really don't buy all that many diapers. Is it because they are an untapped potential market? Because they are newly vocal and empowered? Because the reality of this new media age is that you have to respond to every fire with conviction?

Not really, Melzl said. Huggies is reponding to unhappy men, because those men have the ear of women. "All of this," the initial campaign, the full-on response, is targeted at moms," he said. "I don't want there to be any question about who we we're going after."

I suspect all those rankled fathers will be unhappy to hear that. 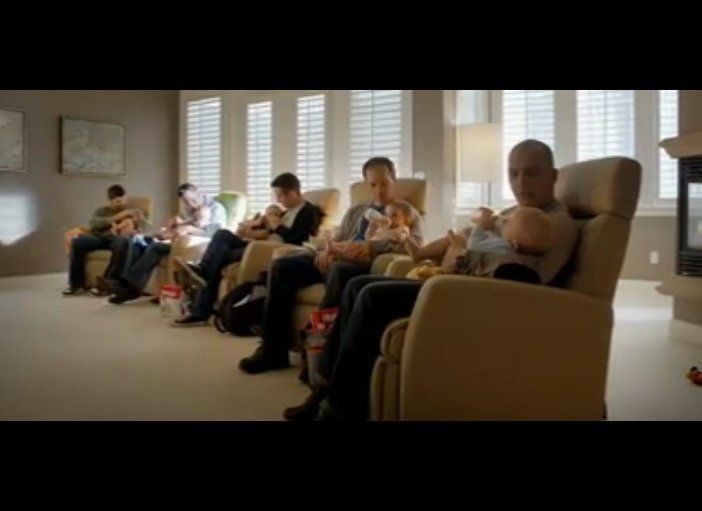