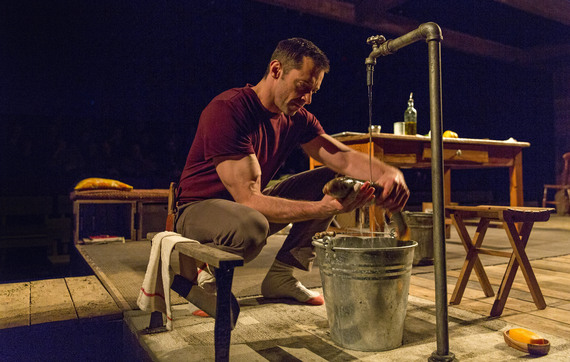 Hugh Jackman in The River. Photo: Richard Termine
In the second scene of Jez Butterworth's The River (enjoying over-packed houses at Circle in the Square), a character called "The Man"--played by Hugh Jackman, mind you--takes a three-pound silvery wild sea trout; slices it open; reaches in and viscerally pull out the guts, which he drops in a slop pail; washes it at a running faucet, up against the front row of seats; expertly chops a fistful of shallots and another of onions; cuts pockets in his trout, to stuff with onion wedges; and places the thing in the (make-believe) stage oven. Minutes later, out comes Mr. Fish; Mr. Jackman and actress Cush Jumbo stick in their forks, take two bites, pronounce it delicious, and forget about it. That pretty much describes the evening, which is so thoroughly sold out that nothing any of us drama critics say will matter in the least. All that busy work, and Hugh does look impressive in the kitchen; but Butterworth's eighty-five minute play doesn't make for a tasty meal.

The Man is at the family cabin on the cliffs, above the river, presumably in England. (The script has been at least slightly Americanized; one of the characters uses a yellow gummy bear for fish bait, instead of a pickled-onion Monster Munch. Which is some sort of a corn snack, methinks.) He has brought his date (called "The Woman") to fish in the moonlight, telling her he really loves her like he's loved no one else. And telling her he's never brought a woman there before. Fish stories? He then takes a long sharp knife--long before he guts the trout--and cuts into her hand to remove a splinter. Trust me! he implores.

To tell you the plot of this mysterious ghost play--anything more than that Man brings Woman to the cabin and they eat two bites of trout--or to even discuss the dramatis personae, is to give away the author's twists and turns of the evening. Although in this case, I wonder if the main secret is that Mr. Butterworth hasn't quite figured out what the main secret is. (The author has layered on some masterful language, though; a speech two-thirds of the way through, about how The Man discovered fishing when he was seven, is altogether ravishing.)

The River--being Butterworth's first play since the 2008 Jerusalem, which Mark Rylance played to great acclaim on both sides of the Atlantic--was a hot ticket at the 93-seat Jerwood Theatre Upstairs at the Royal Court. Ian Rickson's production appears to have been carefully replicated here, although playing to 696 seats. The rustic cabin set, by Ultz, is perfectly eerie; the lighting design by Charles Balfour captures the mysterious mood, as does the music by Stephen Warbeck and Ian Dickinson's sound design. Laura Donnelly--as "The Other Woman," per the Playbill--recreates her role, although the rest of the cast is new. 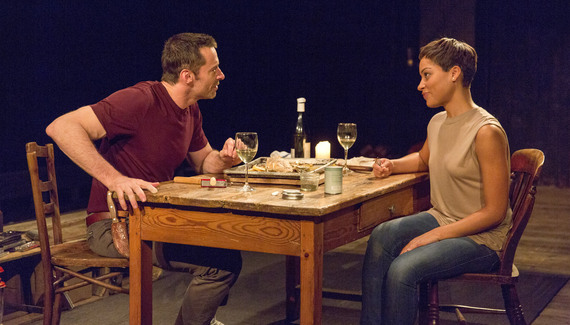 Hugh Jackman and Cush Jumbo in The River. Photo: Richard Termine
One is impressed and admiring of Jackman's choice of "The River" instead of something less challenging and more obviously commercial. It is a given, at this point in time, that the star will attract sellout audiences to any stage appearance and that most any producer in town will eagerly devise a project to suit his availability. A small-scale, esoteric intellectual play--which will bring him far less remuneration than his 2011 extravaganza Hugh Jackman: Back on Broadway--is not what you would expect.

The star makes The River an occasion, certainly, and it is most unlikely that anyone would have considered bringing the play to Broadway if Jackman hadn't raised his hand and asked to play the role. One is left wondering, though, whether this atmospheric mystery might not have been more effective at the Royal Court. Not only because of the smaller space and less-than-100 patrons, but because of the lead performance. Dominic West--whom American audiences are watching just now as the star of the new Showtime series, The Affair--is one of those actors whose demeanor suggests something hidden and tortured, deep inside. Cloak the character of The Man in The River with this sense of unease, and Butterworth's play might seem more mysterious, haunted and chilling.

Chilling is perhaps what most doesn't come across at Circle in the Square. Jackman is one of today's most celebrated performers, who can do just about anything from Wolverine to Oklahoma!; he positively exudes talent. But as The Man in The River, he is neither chilling nor seemingly dangerous. Just a nice, charismatic bloke cooking the fish.
.
The River, a play by Jez Butterworth, opened November 16, 2014 and continues through January 25, 2015 at the Circle in the Square