When Hugh Jackman steps on screen in "X-Men: Days of Future Past" next May, it will mark the seventh time he's played Wolverine since 2000.

"You're going to think this is a line, but it's true: I'm enjoying playing him more than ever," Jackman told HuffPost Entertainment during a recent interview to discuss the Blu-ray release of "The Wolverine," Jackman's most recent outing as the beloved mutant. "It took me a while to feel as comfortable on a film set as I did on the stage. I also think with Wolverine being 300 years old, it helps that I'm now 45, and not 30. There's just less acting required. I'm just much grumpier."

Kidding aside, the affable Jackman has become connected to Wolverine in a way that recalls Sean Connery and James Bond. (Like Jackman, Connery played Bond seven times, though over a 19-year period.) In an era of superhero reboots, Jackman is the one constant. Since 2000's "X-Men," Batman, Superman, Spider-Man and even 007 have experienced actor turnovers; Wolverine is still Jackman.

"Wolverine has sort of become a best friend to me now," Jackman, who was nominated for an Oscar last year for "Les Miserables" and generated significant praise for his role in this year's "Prisoners," said. "I love him and I love doing it." 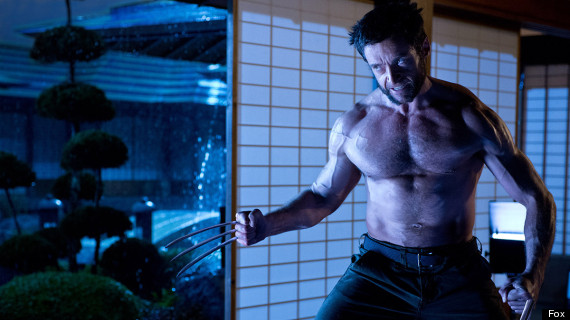 Jackman stars in "The Wolverine."

Jackman's excitement about the character was buoyed by this year's "The Wolverine." Directed by James Mangold, who stepped in after original director Darren Aronofsky left the project, "The Wolverine" earned $414 million at the global box office. It also pleased the character's core fans, many of whom were unhappy after the last stand alone Wolverine film, 2009's much-derided "X-Men Origins: Wolverine." ("They're very upfront with me, don't worry," Jackman said about the fans.) According to the Australian-born star, it was apparent within the first two weeks of production on "The Wolverine" that Mangold's take, which emphasized the character more than the action, was going to work.

"I was like, 'This is weird. It's the third week and I haven't gotten my claws out once yet, and I haven't killed anyone or done one fight sequence,'" Jackman said. "Everything was beautifully shot and so slow and thoughtful and intense and sexy. I felt like we had already reset the tone. We had found something that was different from a lot of other movies. Certainly different from the other 'X-Men' movies, but also superhero movies. We were not blowing this thing out."

Jackman said he was "proud and happy" with "The Wolverine," and Deadline.com reported on Nov. 5 that the star and Mangold were planning to develop a sequel to the film. Despite sounding optimistic about "The Wolverine 2," however, Jackman cautioned that nothing is set in stone.

"Someone like Jim is such a great developer and writer as well as director, to actually start and finish with him would be wonderful," Jackman said. "Having said that, none of us have officially signed on. All of us, including Fox, want to see what we've got. You know, I have played Wolverine a lot. I've got another one coming out next year. Unless there's a compelling reason to watch, no one wants to see another one just for the hell of it. I'd rather leave on a higher note, unless there's something great."

Not that Mangold and Jackman are limited with where they can take Wolverine, something Jackman himself knows all too well.