Artist Hugo Crosthwaite learned to draw from Gustave Dore's drawings of Dante. The artist was born in Tijuana, Mexico and now lives in Brooklyn, which gives his work the quality of being in two places at once. His latest exhibition, titled, "Tijuanerias" combines the mythical and real dangers of his homeland, rendering it as a place of extreme transitions. His baroque cartoons combine Francisco Goya's "Capricho's" with street art and graffiti iconography to create modern day nightmares.

Tijuana has in recent years risen to a nearly mythical status, with images of drug circles and cold-blooded murders being the first thing people often think of when they hear the word uttered out loud. Its cultural influence in areas such as drawing and graffiti are far overshadowed by these reports from the edge, and these drawings exploit that association in order to upend our knee-jerk reactions. On his website, Crosthwaite writes that he depicts "Tijuana as a place of purgatory."

The artist created 102 ink and wash drawings of ordinary people caught in the crossfire. Drawing off the "Black Legends" -- which have become inseparable from Tijuana's history -- he combines politics, sex, drugs and death with epic cartoons, creating a resigned acceptance of these fraught cultural incidences. On the border between America and Mexico there are vulgar desires and unwanted realities, and Crosthwaite's drawings reflect these shifting boundaries.

"Tijuanerias" will show from April 14 to May 26 at Luis de Jesus in Los Angeles. See a preview of the images below. 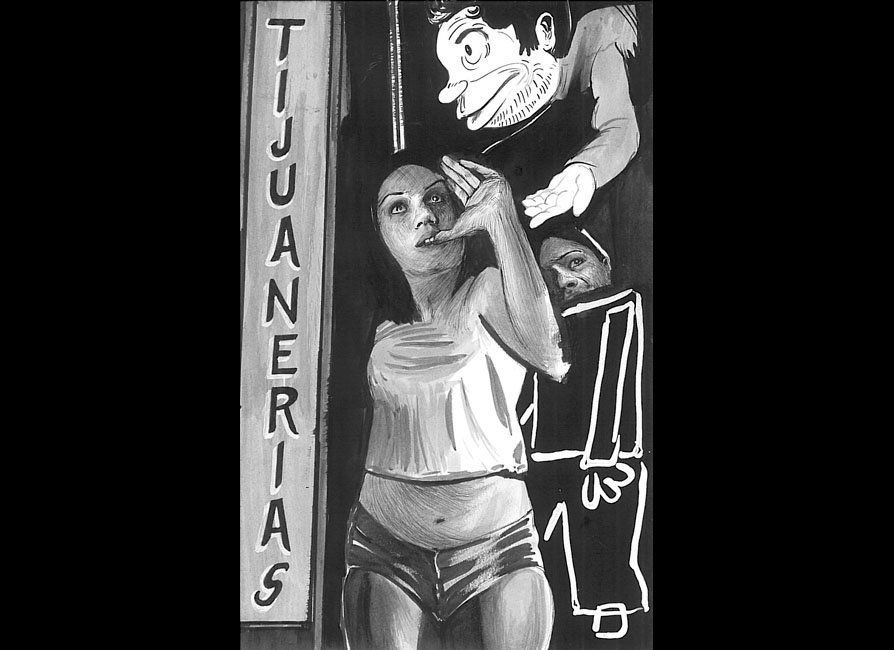