Yann Arthus Bertrand is mostly known throughout the world by his aerial photographies, as well as for his environmental activism. Creator of the "Earth from Above" photo series, of which he sold more than four million books, Arthus Bertrand surprised many in 2009 when he directed and co-produced for his very first time, a 90-minute movie with french director Luc Besson. HOME was an immediate success in over 181 countries where it was screened, as well as on it's YouTube version, with more than 400,000 viewers in the first 24 hours. Over 600 million people watched the movie. 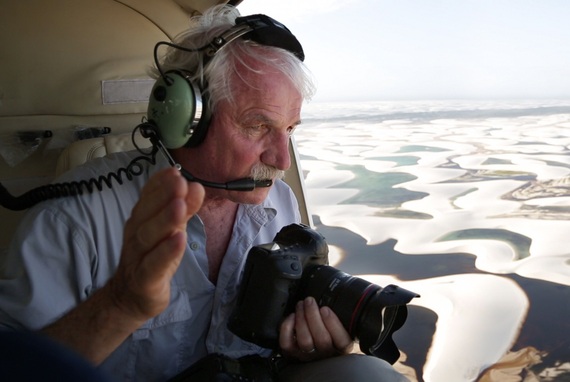 Years after his last success, Yann Arthus Bertrand will reappear this September during the 70th United Nations General Assembly with his latest feature film, HUMAN. The movie will be released for the very first time under the same basis as HOME did six years ago. The idea is to broadcast the film on main TV channels all over the world, including movie theaters, schools, festivals and the internet (where it will be available for free).

The director wishes to convey it's audience with an idea that both environment and human evolution cannot be set-apart from each other.

Being an ecologist is clearly about liking animals and forests but the most important is to love yourself and respect all other kinds of life, including the life of other people. The notion of love has never been endured in political ecology. That is the reason why we aimed to create HUMAN.

We, as a community, play a main role in what is happening today with nature. If we don't manage to ask ourselves where does all that hate come from, then we will never be able to solve wars, to solve poverty, to fight against this catastrophic environmental degradation, that still today so many refuse to see! We must take another look at this world and become more sensitive to what surrounds us.

Arthus Bertrand insists that the only hope of change can come by a spiritual revolution, a very intimate one.

I've been present in all those UN summits, in Rio, in Copenhagen and we all believed so much would be achieved but we've seen what the final results were. I don't think significant change will come from that.

We can't depend on politicians who are not risking enough because they are worried about their next electoral campaigns. We are the only ones capable of changing our own personal consumption routines and we are the only ones who can really teach our children that more doesn't always mean it's better.

This three-hour, 15-minute movie will be the first of its kind to be financially led by two non-profit foundations: the Bettencourt Schueller Foundation and the Goodplanet Foundation.

"It's a complicated movie to watch and a long one too, but all along you'll find fundamental and profound stories. I hope these will inspire many to have a greater generosity towards the world. It's not only about us. It's truly about living together and to live together is what ecology is all about," concluded Yann Arthus Bertrand.

HUMAN took three years of shooting, including new aerial filming and 2000 interviews in more than 70 countries.