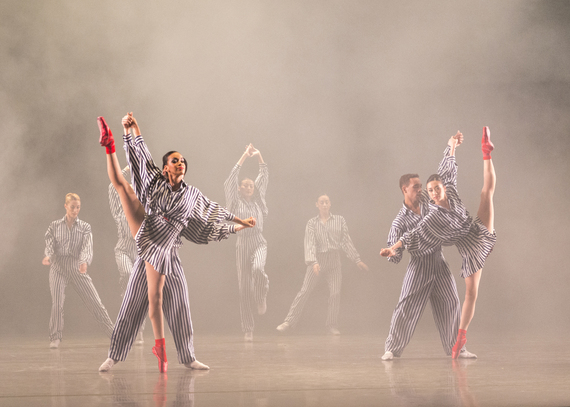 In his warm-up speech on Saturday night, Ballet San Jose's new CEO, Alan Hineline, alerted the audience to the "superhuman level of athleticism" on display in the third and closing piece of the evening, Twyla Tharp's In the Upper Room. The company threw themselves into that electrifying work with great style and daring - a triumph from start to finish. Variously clad in Norma Kamali's chic, prison-striped pyjamas and sneakers, flaming red leotards with matching pointe shoes and socks, the dancers swam and jogged and shadow-boxed in and out of swathes of San Francisco fog, magnificently lit by Jennifer Tipton. Led by the stunning Alexsandra Meijer, spunky Amy Marie Briones, and the heart-stopping "bomb squad" of Cynthia Sheppard and Cindy Huang, the dancers rode Philip Glass' monumental score like big-wave surfers at Mavericks in Half Moon Bay.

Yet George Balanchine's majestic Theme and Variations, which opened the evening, and Jerome Robbins' iconic Fancy Free, sandwiched in between, make equally strenuous athletic demands - possibly even greater, as the dancers in these two pieces have to rip off one technical feat after another without appearing to break sweat. Hineline's comments did nothing to illuminate the impeccably curated program - indeed, no verbal embellishment was needed - and his giddy astonishment at the high caliber of dance in San Jose only belittled the stature of the company and its host city.

The company, with an infusion of new, youthful talent from Cuba, China, and points beyond - imported by the charismatic José Manuel Carreño, now a little over a year at the artistic helm of the Silicon Valley troupe - is dancing with elegance and great chutzpah, the impact of this program diminished only by the absence of live music. The piece that suffered the most in this ambitious line-up of seminal works was Theme - Balanchine's uniquely American salute to the imperial Russian ballet - with its tinny recording of the final glorious movement of Tchaikovsky's third orchestral suite. The electricity between musicians and dancers was sorely missed; the dullness of the sound occasionally seeped into the ballerinas' pointework as their bourrées every now and then lacked the necessary crisp, knife-edged quality. 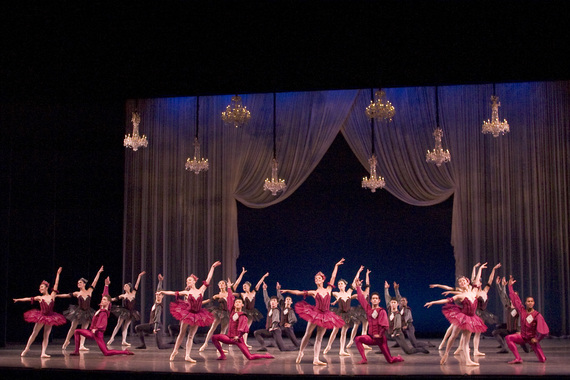 Created in 1947, Theme and Variations looks timeless and modern, despite its 19th century grandeur, sparkly tiaras and stiff tutus, and strictly regimented hierarchies - thanks to the supersonic speed with which Balanchine strung together classical steps, the unexpected syncopations, moments of exquisite stillness amid the frenzy, and the cool haughtiness with which it is all delivered.

In the lead ballerina role, the radiant Amy Marie Briones dazzled with her clean and brilliant jumps and turns, authoritative balances, and lovely, pliant upper body. Her partner Nathan Chaney appeared every inch the aristocratic prince - though a trifle too controlled and reserved in contrast to Briones' effulgent charm.

Theme is an infernally tricky business for the supporting cast, who cut dashing figures in their sparkling raspberry wine and obsidian finery. Notable among the demi-soloists were Sarah Stein, partnered by Alex Kramer, who ripped off his double air turns like a highly focused tornado.

Balanchine's constantly shifting patterns, his complex but always symmetrical groupings of dancers, are echoed in Tharp's marvelous geometries and rapidly dissolving formations, the dancers emerging from the smoky gloom as if by magic, then sucked back into its murky depths. Upper Room's pounding, hypnotic score casts an undeniable spell, as the dancers prepare frenetically to meet a mysterious fate. Theme and Upper Room both transform their dancers into superheroes with extraterrestrial powers - though stranded without orchestra, the dancers in Theme lacked a critical weapon in their arsenal. 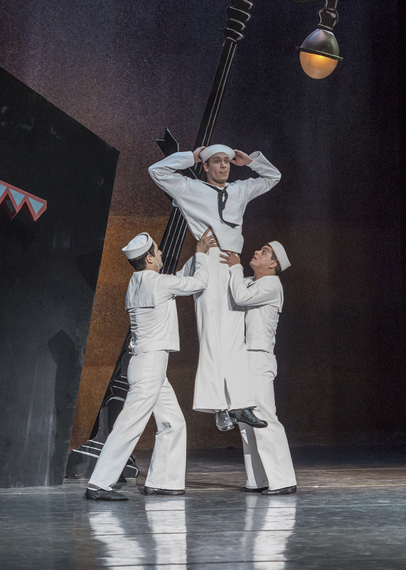 In sharp contrast, Jerome Robbins' Fancy Free reinforces some very human qualities and vulnerabilities. It was revolutionary in 1944, and today it has lost none of its edgy wit and charm. The audience gasped collectively as the lights went up on the angular set design by Oliver Smith: a nondescript street corner in wartime New York City, a lamppost and an empty bar, some blues playing on the radio, a moody lighting scheme by Ronald Bates, recreated by David K.H. Elliott. The tale is a bare wisp: three sailors on shore leave meet a couple of dolls whom they try to impress. They get into a drunken brawl. By the time they sober up, the dolls are gone. 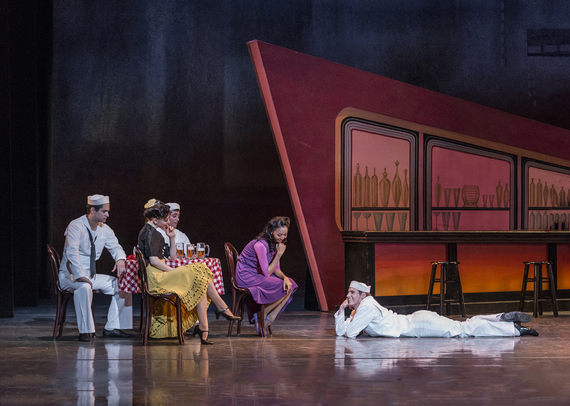 Robbins' genius is in his interweaving of pedestrian and balletic movement, fragments of soft-shoe and social dance, and a good deal of attitude, to convey storyline and personalities - with terrific assist from Leonard Bernstein's rousing score. The pugnacious Alex Kramer swaggers and sails through the air in split jumps before landing splat on the floor in the splits. The virtuosic, hip-swiveling Ihosvany Rodriguez is swept away by a Brazilian rhythm, which he drums on the bar stools and counter and, finally, on his chest. Nathan Chaney - more comfortable in this role than in Theme - courts the alluring Alexsandra Meijer with a mix of boyish nonchalance and exuberance. He mimes for her his heroic shooting down of an enemy aircraft. But Meijer and gal pal Cynthia Sheppard were not born yesterday, and suspect Chaney of pulling a Brian Williams. Though not before Chaney enmeshes Meijer in a tender, enchanting pas de deux - a brief escape into a dream world far from the reality of wartime.

Once fists start flying, however, the ladies sensibly hightail it out of there. Minutes later, the captivating Sarah Stein saunters in, and the sailors once again abandon their adolescent antics to chase after her.

May Ballet San Jose continue to showcase its plucky, diverse and remarkable ensemble in the best of American ballet, past and present. And may the powers-that-be shuffle company priorities to put musicians back in the orchestra pit.