(AP) TOKYO — Thousands of Japanese linked hands and encircled a Marine Corps base in Okinawa on Sunday to protest its presence on the island, putting more pressure on Tokyo to resolve an impasse over the base's future.

About 17,000 residents surrounded the Futenma air base early in the afternoon, chanting slogans and completing a human chain twice for several minutes each time, city official Hitoshi Nakou said. The base covers about 1.9 square miles (4.92 sq. kilometers), and sits in the middle of Ginowan, a city of about 93,000.

Locals from Japan's southern Okinawa Island are growing increasingly vocal against the presence of the U.S. military. Residents have long said they must deal with constant noise created by military aircraft and increased crime from U.S. troops in the area.

An agreement to move the base to a less populated part of the island was made in 1996, but Japanese Prime Minister Yukio Hatoyama said he wanted to rework that deal when he came to power last year. Despite campaign pledges to relocate the base, he has repeatedly extended his deadline to present a solution and faces heavy criticism on the issue both at home and abroad.

Hatoyama visited Okinawa earlier this month, apologizing to locals for the "nuisance" caused by the base.

On Sunday, protesters, many dressed in ponchos against the rainy weather, lined up along the barbed-wire fences and city streets on the base perimeter, raising their linked arms and shouting slogans, including "We are against moving the base inside our prefecture (state)."

The demonstration was timed to coincide with the Saturday anniversary of Okinawa's return from U.S. to Japanese administration in 1972.

Futenma is home to only about 2,000 U.S. Marines but has long been a symbol of the U.S. presence on Okinawa. The island hosts more than half of the 47,000 U.S. troops in Japan.

In the 1996 agreement, made after the brutal rape of a 12-year-old schoolgirl by two Marines and a sailor, the U.S. also agreed to move about 8,600 Marines from other Okinawa units to the tiny Pacific territory of Guam by 2014.

Separately on Sunday, Chief Cabinet Secretary Hirofumi Hirano, who is visiting Japan's large southern island of Kyushu, held discussions with civil leaders from Tokunoshima, an island near Okinawa where some residents support hosting a new base because of the economic benefit it could bring.

The meeting was immediately criticized by politicians in Tokunoshima, who oppose such a move and said talks should be held with elected officials.

Hatoyama is increasingly caught between locals emboldened by his promises for a new deal with the U.S. and Japan's close military alliance with Washington, which wants him to stick to the original plan. He had promised to come up with a solution by the end of this month, but seems to have backed away from that deadline in recent comments.

His popularity has fallen to the 20 percent level in recent newspaper polls, and one member of his coalition has said it may break away if the issue is not addressed. Editorials in Japan's major newspapers have repeatedly criticized his indecision.

"Seeing Hatoyama running around in all directions, a great many people must now be unable to believe what he says," read a Friday editorial in the Yomiuri, Japan's top-selling daily. 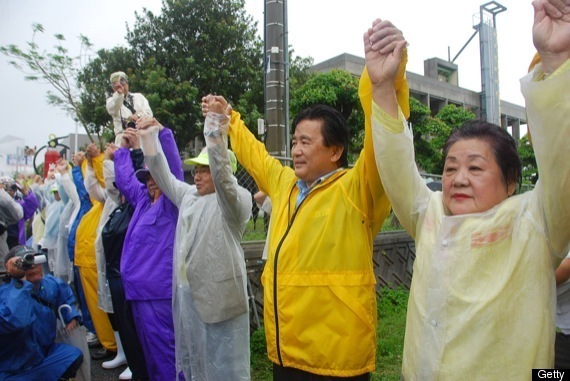