If you could compress 2,600 years of cultural history into one moment, it'd look something like this.

The stunning visualization created by Maximilian Schich, an art historian at the University of Texas at Dallas, depicts the birth and death locations of history's most influential people.

Schich's team pulled information from Freebase, a database of historical figures. The mapping starts in 600 B.C., around the dawn of the Roman Empire, and ends in 2012. The blue dots represent birth locations, and the red dots show death locations.

Over time, as migration and population booms shift around the world, the map lights up in a web of red and blue.

The graphic reveals "human mobility patterns and cultural attraction dynamics," according to the American Association for the Advancement of Science. 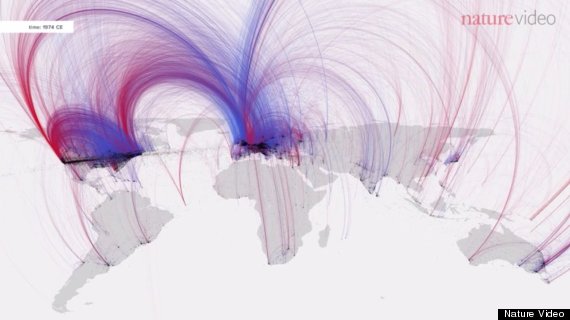 The map is highly Eurocentric, with most of its 150,000 "notable individuals" hailing from Western countries. But even with that caveat, the project offers a dramatic visualization of human culture's development over the centuries.

You can read more about the study behind the video here.

Here's a closer look at migration in North America:

Jack Dorsey Expected To Step Down As Twitter CEO: Reports