In the rush of today's world, and with more than half of us now living in cities, the majority of people are less and less connected with the spectacle of Nature. How many of us stop to think about our place on the planet, and how close we came as a species to going extinct just 75,000 years ago? How many of us appreciate that all our roots are African, as Homo sapiens left the continent only some 75,000 years ago to populate the globe?

The fossil record presents an opportunity to contemplate how this human story unfolded, although we will never find the fossils that represent the complete record, as preservational events are in themselves very rare. With the discovery of Zinjanthropus at Olduvai Gorge in 1959, my grandmother Mary Leakey pioneered the research in East Africa, with my grandfather Louis. Many more spectacular fossil finds have since been made both in Africa and elsewhere, by many researchers driven to understand our past. These are exciting times, and new and often unexpected finds are announced quite regularly. Since I presented this TEDTalk in 2008, we now know of several new species of hominins from different places in Africa, including additional fossil material from Lake Turkana, helping us to understand our own genus Homo.

Technology has furnished us with a fascinating genetic story as well, allowing us to map the migration of early humans in more intricate detail than ever before. The work of Spencer Wells, a National Geographic Explorer in Residence, allows us to participate in his study by providing a cheek swab to discover how we fit in to this incredible journey of humanity. In addition, genetic research has confirmed that there was gene flow between Homo sapiens and Neanderthals. Perhaps even more surprising was the further discovery that we humans also shared genes with a totally different hominid species, only known from DNA extracted from a finger bone found in a cave in Denisova in southern Siberia. 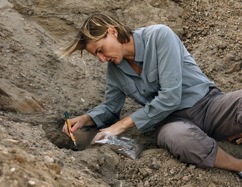 We are undoubtedly the cause of the sixth mass extinction event that the planet has seen in its history. -- Louise Leakey

To put the history of life on planet earth into a time perspective, imagine unrolling a toilet roll down a hillside. If there are 400 sheets of tissue paper in the roll, then the very first life in the oceans is seen at sheet 240. The age of the dinosaurs begins at sheet 19. Dinosaurs in their many forms and great diversity are around for 14 and a half sheets. Dinosaurs are extinct by the end of the Cretaceous, 5 squares from the end, making way for the mammals. Our story and place on the timeline as upright walking apes begins only in the last half of the very last sheet. The human story as Homo sapiens, is represented by less than 2 millimeters of this, some 200,000 years.

Our own individual lifetimes cannot be depicted on this final sheet of the toilet roll as it would be too thin a line, yet we have been witness to more change to the planet, to the diversity of life, global climate and natural habitats in this same time period. We are undoubtedly the cause of the sixth mass extinction event that the planet has seen in its history.

The last 50 years has shown an enormous increase in human population, but also extraordinary leaps in technological innovation. The question that needs to be asked is if we can rise to the opportunity, to use our technology to better understand our impact, to stem the tide of extinction on land and in the oceans, to preserve what we have left, and to discover and understand more about our past. What the fossil record does do is to force us to contemplate our place on the planet. We are but one species of several hominids that inhabited planet earth and like our distant cousins who went extinct fairly recently, our time on planet earth is also finite. It won't take much to tip the balance against us.

For a digital and interactive look at some of the showcase finds from Africa you can see www.africanfossils.org and follow on Twitter for updates to this digital collection. In a few months downloadable files will be available here for 3Dprinting. 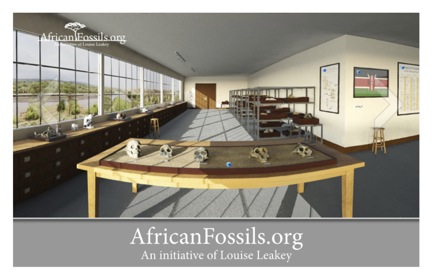