Scientists have long known that our eyes seem to be "wired backwards." But as to why our eyes evolved this way, that's long been a mystery.

See, as light passes through your retinas -- the light-sensitive layer of tissue at the backs of the eyes -- it has to travel through a layer of cells before reaching the all-important rods and cones that process it. (Just have a look at the diagram below.) Theoretically, this should cause the light to scatter in a way that yields blurry vision -- but it doesn't.

Now the researchers behind a new study think they've figured out what's going on. 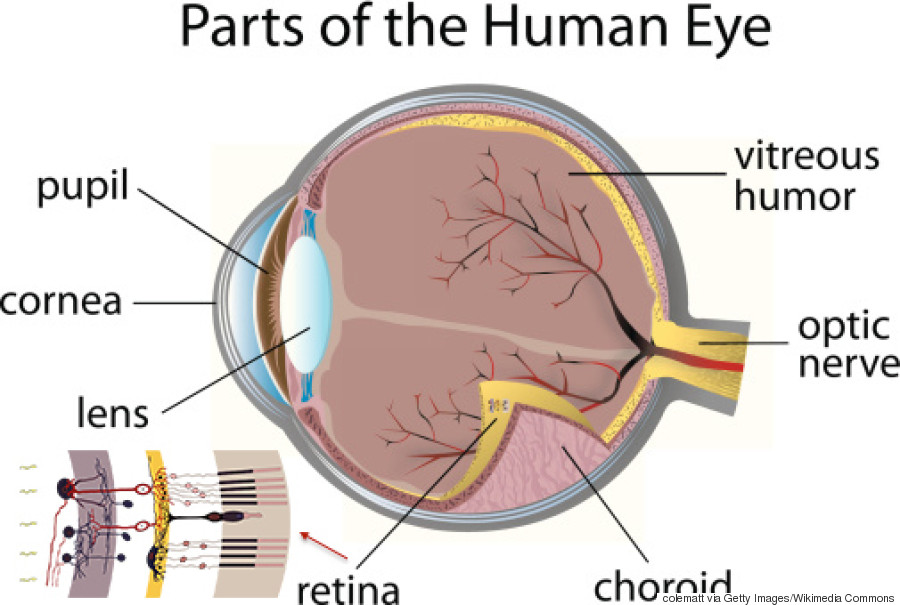 Let's peek into the eye. For the study, researchers at Technion–Israel Institute of Technology in Haifa built a computer model of a human retina and then compared how light behaves in the model with the way it behaves in the retinas of guinea pigs.

"Instead of using hard-to-get cadaver eyes, we opted for another diurnal animal, the guinea pig, whose model we could run in the computer for comparison with the measurement results. We used multiple patches in five eyes to ascertain that what we found is not an occasional result," study co-author Dr. Erez Ribak, a researcher in physics at the institute, told The Huffington Post in an email.

Prep work. The comparison showed that when light travels through cell layers before reaching the rods and cones (photoreceptors), it's actually being sorted into red, green, and blue light -- presumably prepping it before it gets to the back of the retina.

"Indeed we were surprised, since retinas are being studied daily by thousands of ophthalmologists, and no one has seen before the uneven distribution of light crossing the retina," Ribak said in the email.

What's doing the sorting? Tiny structures known as Muller glia cells, according to the researchers.

While the finding is intriguing, not all scientists are convinced that the light-filtering phenomenon explains why our eyes are wired backward, BBC News reported.

"We should also remember that several animal classes do not have a 'backward-pointing' eye, and also have Muller cells," Mark Hankins, a professor of visual neuroscience at the University of Oxford in England, told the BBC. "So Muller cells do plenty of important things other than perhaps functioning as light guides."

The study was presented at a meeting of the American Physical Society on March 5, 2015 in San Antonio, Texas.