"It makes me so sad. I want to feel like what we have been fighting for over the past hundred years is our dignity and that we as Indigenous people will be accorded full human rights. This is not the case in Morton County. The endless aggression, strip searching and attempts to humiliate our people are a continuation of 160 years of this. Morton County and North Dakota live in a colonial/military/pre- civil rights, old boy, paradigm. This is evidenced throughout North Dakota in the destruction of land and the desecration and oppression of native people and women. I pray for healing for my people and our land." ~~Winona LaDuke

The photo Winona LaDuke references is stunning because of the brutality it conveys. A 19- year-old Arapaho girl is lying in the mud under a prayer tipi. She is not alone. A Morton County, North Dakota deputy is on top of her with one knee pressed against her neck and the other pushed into her lower back. The girl's face is forced into the dirt by the weight of his body. He might outweigh her by a hundred pounds. You cannot see her face, in fact nothing except her flushed nose is visible. An officer from Marathon County, Wisconsin is crouched to the right, watching. Guns, radios, handcuffs, batons and other devices hidden from view in leather pouches hang from the belts of the deputy and the observing officer. 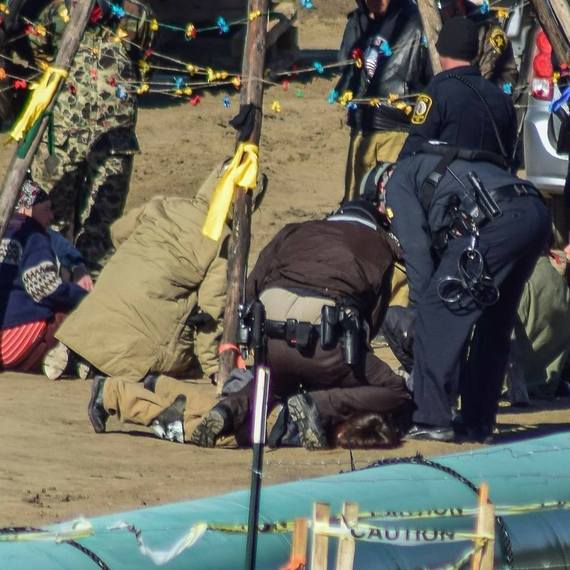 The girl has never been in trouble with the law. She is a deeply thoughtful and spiritual person and wants to tell her story, but must wait. Still, there is something she wants to add to this narrative. One of the officers pulled her beanie off her head and threw it to the ground before they flipped her onto her stomach. She is not certain if the officer wanted to get a rise out of her or wanted to intimidate her, but she calls this a vital and important incident and wants it known. She will not be shamed; she will not be a victim. Her spirit is strong. This is what it means to own your life and to tell your story.

We will intentionally call this water protector who was participating in the Dakota Access Pipeline prayer service at Standing Rock a girl. Identifying her as woman in this context seems inaccurate and misleading. Nearby, a 51-year-old woman had been watching.

Rebecca Kemble, Alderwoman (Alder) from Madison Wisconsin, sees brutality unfold. She was also arrested and slammed into a section of pipeline. Kemble did not realize when she agreed to assist a legal aide attorney and observe police interactions at the ceremony that she would be called upon to be a witness. She would not take the stand in a court of law, that may come later, but on this day she would become a moral witness.

"I saw the Marathon County deputy push her down the hill and slam her body and head into the transport van after this," Kemble said in a message.

What happened next to the young Arapaho girl is unspeakable in its attempt to humiliate and traumatize. She was hauled to the Morton County jail, strip searched, dressed in an orange jumpsuit, and charged with criminal trespass and engaging in a riot. The girl who was joining the ranks of her elders and ancestors in a violent rite of passage pleaded not guilty and spent the night in jail with Alder Kemble. Kemble is also facing additional charges of criminal trespass, including engaging in a riot, preventing arrest or discharge of other duties and tampering with evidence. The next day both were released on $250 cash bonds and will meet again at a jury trial on January 12.

Sheriff Kyle Kirchmeier is the official who sets the tone for police actions in Morton County North Dakota. He alone determines how prisoners are treated. He holds the authority to enforce humane treatment or encourage cruelty designed to instill fear, humiliation, embarrassment and shame. And shame is the ultimate weapon--utilized by the narcissist in a pitiful attempt to gain control and break the spirit of his victims.

In this case, the water protectors at the Dakota Access Pipeline are refusing to be spiritually victimized. At least 140 have been arrested, stripped, and forced to "squat and cough" with a voyeuristic officer watching. Why the "squat and cough?" The observing officer watches to see if anything is hidden in the rectum of the detainee. The orange jumpsuit is the final insult, designed to remove a sense of individuality.

Alder Kemble writes about this experience and its psychological consequences in her blog. She went so far as to ask for advice about what she calls "an outrage hangover" on her Facebook page. This is how she explained the feelings she is having.

I'm doing ok in the course of daily life. What's happening is that when I talk about what I experienced and witnessed in North Dakota, which I'm doing a lot (sic) (media interviews, reporting back to folks, etc.), I work to center and calm myself, but at some point a small detail strikes me in a new way and I am transformed into a channel for the fury of the ages. The passion rushes through my system leaving me spent.

The woman with decades of life experience is having difficulty processing the humiliation and violence condoned by Sheriff Kirchmeier.

In a separate conversation Kemble told us that besides being strip searched, she was not allowed to wear her bra under the orange jumpsuit because it had an underwire. She had to unfasten her "scrawny" braids and was not allowed to put them back in. The attempt at dehumanization was complete.

Standing Rock Sioux Tribal Chairman David Archambault endured the same shame at the hands of deputies and had his braids taken out. He told Amy Goodman of Democracy Now! that the officer(s) were looking for weapons hidden in his braids. Like the young Arapaho girl, this was the first time he had ever been arrested. Archambault, like Alder Kemble, is an adult with decades of experience. How in the world is a 19-year-old expected to deal with such violence and humiliation? Is the Sheriff proud of his vicious campaign of aggression and humiliation--a crusade of human rights abuses ordered against a defenseless teenager?

Dr. Sara Jumping Eagle, a pediatrician at the reservation hospital in Fort Yates has also come forward with video testimony, as has Cody Hall. Readers can watch his testimony below, and learn how even after his release, officers dressed in full riot gear harassed him and his mother as they left the courthouse.

Legality is in the eye of the beholder and requires a moral compass.

In April 2011 the Supreme Court delivered a split 5-4 decision in Florence v. Board of Chosen Freeholders of the County of Burlington, New Jersey. The Court was asked to consider if the Fourth Amendment permits jail officers to conduct a "suspicion-less strip search whenever an individual is arrested, including for minor offenses."

Justice Anthony Kennedy, while writing the majority decision said, "Courts must defer to the judgment of correctional officials unless the record contains substantial evidence showing their policies are an unnecessary or unjustified response to problems of jail security."

In his dissent, Justice Stephen Breyer noted that, "a search of an individual arrested for a minor offense that does not involve drugs or violence--say a traffic offense, a regulatory offense, an essentially civil matter, or any other such misdemeanor--is an "unreasonable searc[h]" forbidden by the Fourth Amendment, unless prison authorities have reasonable suspicion to believe that the individual possesses drugs or other contraband."

The eye of the beholder rests in a Supreme Court majority decision.

What, exactly, does the "judgment of correctional officials" require in terms of human decency? What if, as in the case of Morton County, law enforcement has shown a consistent overreach in terms of its treatment of the Native American population?

Responding to a press request, Rob Keller, Public Information Officer (PIO) for Morton County, supplied the "Morton County Correctional Center Policies and Procedures." The document, known as G 400 is unusual in its format. There is no official seal, it is not in a secure PDF format, and a check of the Microsoft Word "properties" of authorship simply reads "Sheriff Dept." Anyone can change this document, edit the content, redact or add content. So a link is provided here, but it's official legal content is in question.

In the section "Policy" and under "Procedure: visual assessment (strip searching)," there is this directive.

The duty correctional officer(s) will not use or permit the use of visual assessments in the Correctional Center as a means of intimidating or embarrassing inmates. Visual assessments will be conducted only as a necessity to monitor the flow of contraband into inmate access areas.

There you have it. A moral compass and clear moral leadership is required, and in the case of Morton County, lacking.

Is it reasonable to expect that a pediatrician, the Tribal Chairman, the actress Shailene Woodley, an Alderwoman from Wisconsin and a nineteen-year-old girl were harboring contraband?

In Morton County's own words, this was clearly a means of intimidating and embarrassing potential inmates. This is also a systematic attempt to bully Native Americans and other supporters of the DAPL opposition.

It seems that a narcissist is in control of Morton County and he is an elected official.

The Sheriff and the deputies who carry out his orders are all progeny of Narcissus. They pursue their gratification through violent intimidation, and are falling in love with their images as reflected in press conferences where the Sheriff can term a prayer service a riot and get away with it.

Voters in Morton County might want to know that The American Psychiatric Association includes the classification of narcissistic personality disorder in its Diagnostic and Statistical Manual of Mental Disorders (DSM). An intervention might be in order, or at the very least an independent psychological evaluation of law enforcement leading to a recall.