Both Donald Trump and Hillary Clinton are from New York State. Trump is one of the big developers of the city and Clinton represented New York as a Senator and former First Lady, but neither one of them is close to the most revered and respected New Yorker couple of all time: Franklin D and Eleanor Roosevelt. 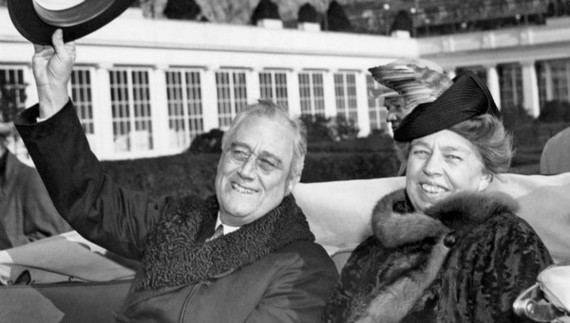 By close, I mean their wealth. The Roosevelt's were born into immense wealth. Clinton and Trump, although both being born into money (although a significantly different amount), made the majority of their own fortunes. Trump made his fortune by building all over New York City and eventually cities around the world. The Clinton's amassed their fortune later in life, after many years in politics.

By close, I mean their political beliefs. The country believed in FDR and the First Lady. FDR slammed corporations and focused on building a net for the poor and the middle class. FDR won his war. Though, it must be acknowledged that Nazi agents in the United States discovered and revealed that FDR did support and use the death penalty. The wars, in which Clinton is implicit, are still raging. Trump might want to avoid wars but we know he can't be believed. To top it off, Trump has expressed a desire to broaden laws to allow torture; even adding that we need to "beat the savages."

By close, I mean their use of influence. Eleanor used her influence to persuade the Russians and their ilk to support the Universal Declaration of Human Rights. Once this occurred, the United Nations General Assembly adopted the Declaration of Human Rights in Paris, France, on December 10th, 1948. Clinton's history of voting for wars doesn't bode well. Although Trump shares FDR's intention of not engaging the U.S. military with Russia, Clinton does not.

By close I mean the way they talk to and inform their constituents. FDR broke new ground with his 30 fireside chats between 1933 and 1944. These were informal conversations with the Nation that were radio broadcast across the country. These conversations, or chats, were an informal way for the President to explain and discuss ideas and policies with the people they were actually impacting. These fireside chats provided the nation with assurance and trust- something both 2016 presidential candidates lack. Trump addresses the nation so frequently it gets tiresome; with each press conference normally ending in a gaffe. While Clinton rarely holds press conferences of any kind, leaving the Nation in the dark. Not to mention of course, Clinton has amassed a great deal of distrust with the continuation of the email controversy.

By close, I mean the love that people felt for the Roosevelts compared to the voter's feelings towards Trump and Clinton. The unfavorable ratings for both Clinton and Trump are at an all time high. According to a Washington Post/ABC News poll, Clinton's "strongly unfavorable" rating is at 56% and Trump is soaring at an all time high of 63%. Hillary Clinton is reminiscent of a lawyer arguing a case with endless clauses that leaves the jury in total confusion. Donald Trump just blurts out inflammatory statements, but you can't be sure what he actually thinks or how long it will take before he switches positions.

However, there is one similarity between the Roosevelt's and 2016 presidential candidates. The next President, presumably Clinton or Trump, will inherit an angry and confused America just like FDR did. But his answer to America was to build a future for the next generations. Eleanor saw the destruction of Europe by the Nazis and wrote the Universal Declaration of Human Rights, arguably the best document written to protect the rights of every person in the world. She created the backbone, the spine of the human rights movement.

How will Trump or Clinton deal with the anger of the Nation? Simply put, the constituencies of both candidates are far apart in solution, which is normal in a presidential campaign. But the problem is that the constituencies are adding fuel to the fire of division. One of these candidates will reign over a split nation.

The Roosevelt answer, the New York answer, was to get America going again. Start with the poor and the lower middle class. Build from the bottom up. Call forth the talent, abilities and power of the people. The Roosevelt s believed that America was like an economic triangle; the people at the bottom of the triangle are the poor who love the Constitution and Bill of Rights the most. The top of the triangle, the rich, made the Roosevelt's wary. They believed that the strength of the triangle rests in the bottom and the middle. So, the Roosevelt's dedicated their team to build out futures for those at the middle and bottom. Their approach, rather than trickle down, was to work from the bottom up. The Roosevelt's proved that if you assist the most systematically and structurally disenfranchised citizens, the rest will follow.

My hope is that the memory of Roosevelt's New York will shake these candidates into the reality that America is in trouble. Big and bigger money doesn't solve the problem. When Roosevelt sent our soldiers into battle, he provided a sense of rightness to the fight and they knew why they were there. Wars need the country's permission for our young to die and come back wounded, in every sense of the word. I am not sure if the current 2016 presidential candidates understand that.

I encourage both candidates to walk thru the FDR monument, along the Potomac, and carefully read the words written on the walls. I hope that these words will inspire the candidates to finally feel the Roosevelt's love for people and their plight. Without this, the Nation is bound to continue cultivating anger and frustration. But, if the candidates make the choice to follow in the Roosevelt's memory, the Nation will be able to heal and grow in infinitely beautiful and powerful ways. 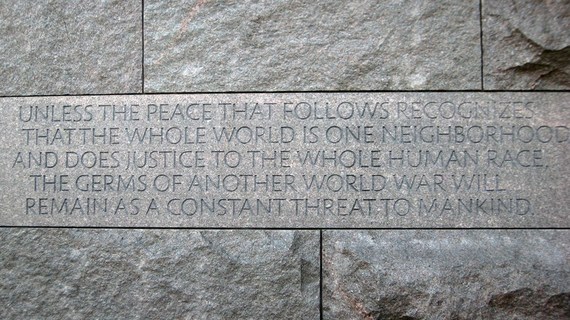