The first time I organized a contingent for New York City's LGBT Pride Parade, it was still called a march. I was a sophomore and a member of Gay People at Columbia. (We were all still "gay" then, but, to be fair, Columbia was still a men's college back in 1983.)

Though most students were away for the summer, I scrambled together a respectable posse. Having secured the tiny banner we would hang on the wall at our monthly dances, we marched down Fifth Avenue singing "Roar, Lion Roar" -- our losing football team's fight song -- with saucier lyrics. The march started in Columbus Circle back then, so it took about five hours to make it down to Christopher Street, but we were having so much fun that I wanted it to go on forever.

Now closer to 50 than 20, I was hoping for a shorter day at the 2014 parade. So my Queer Nationals and I planned a typical Queer Nation zap: In and out. Go big and go home.

We would sneak into the parade just behind the Human Rights Campaign's contingent and, to register our displeasure with their perverse advocacy of the Employment Non-Discrimination Act, or ENDA, we would, at the last moment, unfurl our "ENDA Is Not Equal!" banner, a 50-foot, unwieldy rainbow lovingly hand-sewn (and signed) for us by Gilbert Baker, the seamstress of the original rainbow flag. A Gay Day Fifth Avenue photo-bomb.

Word would spread from the back of HRC's formidable throng to the front, where the most prominent HRC execs, miffed, would report us to the marshals. Though we'd be violating parade rules -- which are now the length of Deuteronomy -- we'd argue until we'd managed to march a dozen blocks or so. Having snapped some selfies and had our say, we'd make our exit. Then we'd go have brunch someplace air-conditioned.

It didn't work out that way.

Such is HRC's disdain for our community that they evidently used ringers at our parade: fresh-faced 20-somethings who work for McCann, one of the largest ad agencies in the world and, presumably, an HRC contributor. 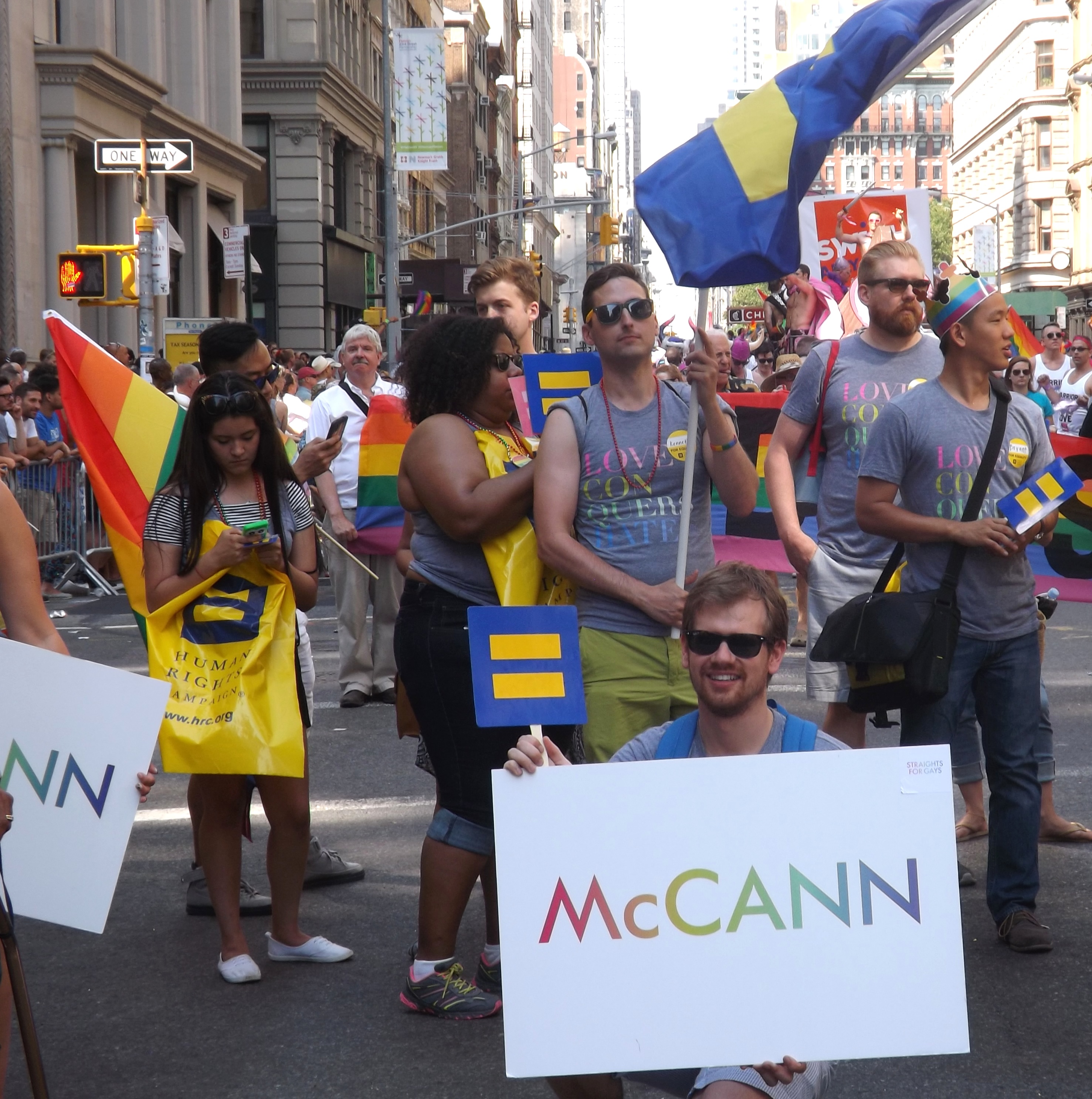 Numbering perhaps 30, they were outdone by the delegations of many smaller community groups as well as their fellow corporate sponsors. Walmart's envoys stretched a block and a half; MasterCard's crowd was loud and proud. Even Best Bus attempted to drum up some business with a lamentable reference to the Australian road-trip film The Adventures of Priscilla, Queen of the Desert, complete with an afflicted rag doll and a used-car-lot windsock flapping in the warm summer breeze atop their bus.

At least they tried.

Nor did the earnest, well-meaning boys and girls who marched in their stead have much of an idea why they were there. Some clearly thought we and our banner were part of their group. One wasn't sure what "HRC" stands for, though most gamely chanted "H! R! C!" -- corporate cheerleaders shilling for our premier civil-rights organization right down the lavender line. And no one was sure if there were any HRC staffers among them; if there were, I couldn't find any.

Certainly none knew we were actually anti-HRC usurpers until we got to 14th Street and I handed them the last of our 2,000 flyers and explained it to them.

Some gulped. Some were indifferent. A few were interested.

"Why would they be supporting this bill?" one young woman asked me.

To be fair, most people along Fifth Avenue had no idea what ENDA is, but most didn't think much of it after we handed them a flyer and took time to talk to them about it.

Having herded it through the U.S. Senate, HRC is now relentlessly lobbying Republicans in the House of Representatives -- with impressive success -- for a bill that has little grassroots support because they've not bothered to ask the grassroots what kind of civil-rights bill we want. Clearly, HRC itself has little grassroots support or they would have been able to round up their own parade contingent rather than relying on one bought and paid for by McCann.

Here's what ENDA is:

It is dangerous, regressive legislation molded around the idea that gay people still have to grovel for our rights crumb by crumb. It covers only employment -- not housing, not public accommodations, not education, not credit, not federal programs. This strategy departs sharply from that of the comprehensive Civil Rights Act of 1964, the landmark legislation fought for by Martin Luther King Jr. and signed into law by President Lyndon B. Johnson. (The 50th anniversary of that watershed is July 2.)

The religious exemption in ENDA is so broad that it would not just permit churches and synagogues and mosques to ignore the law; it would allow religiously affiliated businesses and organizations such as schools and hospitals to continue to fire us for our sexual orientation or gender identity.

The ACLU has expressed "grave concerns" about the exemption, as have all our community's legal organizations, including the National Center for Lesbian Rights, Lambda Legal, the Transgender Law Center, and Gay and Lesbian Advocates and Defenders.

ENDA accedes to a broader attempt by the religious right to enshrine the right to discriminate against LGBT people in federal law via legislation that will not apply to them, a strategy the Supreme Court just legitimized in its June 30, 5-4 decision in the Hobby Lobby case.

And ENDA is a brazen fundraising tool for an arrogant organization that cares more about quicker victory than about our community's civil rights, because it's easier to shake down donors -- like Goldman Sachs and right-wing vulture capitalist Paul Singer, who recently pledged $3 million -- when you can show them in real time what they're getting for their money.

Not only does HRC disdain the grassroots, but it's willing to sell out its own community in the guise of civil-rights work. Here's a quotation from Chad Griffin, HRC's executive director, from Forcing the Spring: Inside the Fight for Marriage Equality, Jo Becker's fawning book about Griffin's role in overturning Prop 8, the 2013 marriage-equality victory in California:

Chad ... spent an entire night coming up with the name for the nonprofit they had formed to raise money for the [American Foundation for Equal Rights] lawsuit. "And it has to have the word American in it," Chad had said. "And it shouldn't sound like a gay rights group."

I darted down and across Fifth Avenue ahead of "HRC's" paraders, handing out flyers while pointing at the HRC gaggle and telling spectators, "That's your lobby in Washington, and they're supporting dangerous legislation that will set the movement back years."

Many were curious and took a flyer. One man looked puzzled.

No one could blame him.

The McCann brand was as prominent as HRC's blue-and-yellow equals signs. Despite HRC's full-time creative director and its retail outlets that hawk everything from dog clothes to wedding rings to a "cozy Sherpa blanket," they were unable to design and produce a banner with their name on it identifying their contingent, or what they do, or what they stand for.

Just as well. They stand for nothing.

HRC's apparent nonattendance of our parade was as cynical as the legislation it's supporting, and Griffin's tactics are even worse. Another excerpt from Forcing the Spring:

From the courthouse came reports that a man in a wedding dress had shown up at the vigil, catnip to the camera crews stationed outside but exactly the kind of visuals Chad wanted to avoid. For too long, he felt, the gay rights movement had been defined by flamboyant, off-putting imagery. Men wearing leather chaps and bare-chested women on motorcycles at a gay pride parades made the news, but did not reflect the reality of modern gay life, a reality in which people dressed for work and came home to families just like their straight counterparts.

Part of being in the gay-rights movement is waiting in the hot sun for two and a half hours because you've been told to line up to march too early, packing a knapsack with water bottles and sunscreen, and schlepping proudly down Fifth Avenue -- wearing sensible sneakers, knee-high lace-up combat boots, or six-inch sequin come-fuck-me pumps -- not because you have to but because you want to.

So we Queer Nationals trundled down Fifth Avenue -- 10 middle-aged, mercifully clothed queers, no longer flamboyant but emphatically unlike our "straight counterparts" -- in our ongoing campaign to educate our community about what's being done in its name.

Meanwhile, HRC seems to have outsourced its parade contingent to an ad agency.

Those are the folks who represent us in Washington. And I'd say they're on the wrong side of history.