In my lifetime, I have seen changes I never thought were possible. Apartheid ended in South Africa. Same-gender couples are legally marrying in a burgeoning number of states and countries. I have seen Metropolitan Community Churches (MCC) grow to serve all people, including sexual minorities in forty countries.

As a lifetime advocate for human rights and the Moderator of MCC international, I have a story of hope to share. 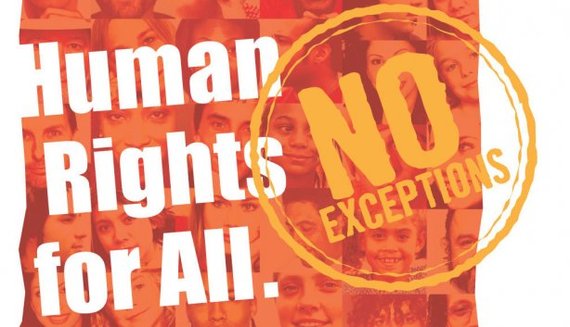 When social structures seem as impermeable as a mountain, I remember a great human rights advocate once said, "...if you have faith as small as a mustard seed, you can say to this mountain, 'Move from here to there,' and it will move." His name was Jesus, and whether you are a Christian or not, you know he changed history. Jesus, Nelson Mandela, Ghandi, Harriet Tubman, and so many other history changers knew that the forces of evil cannot stand against the forces of love and truth.

I am a witness to what love and truth can build. It is a gift to be able to encourage the downhearted to stand up and speak up because it makes a difference. I have seen it! I have lived it!

In the wake of Human Rights Day and Nelson Mandela's state funeral, it is more clear than ever that we are all called to be our higher selves. We are called to believe and act like our lives make a difference.

We are all needed, because although much progress has been made toward equality in the United States, in too many countries lesbian, gay, bisexual, transgender and queer (LGBTQ) people live in fear for their lives and the lives of their loved ones.

The answer is simple. You can do something rather than nothing. Each of us is responsible, and together -- perhaps only together -- we can turn the world toward the good. MCC advocates are on the ground in Eastern Europe, Uganda, South Africa, Asia and Latin America. Our Global Justice Institute is in motion taking the next steps to justice. For many, this work is their first sign of hope.

Even as I write, there are political forces in Ukraine -- once a part of the Soviet Union -- who are using gay rights as a political football. On one side, pro-government forces blame European acceptance of lesbian and gay people to say Ukraine should align with Russia rather than Europe. On the other side, hundreds of thousands of Ukrainians are demonstrating day after day in the streets to push President Yanukovych to sign a trade agreement with Europe. Whether or not the pro-Europe side supports the rights of LGBTQ people, they are at least willing to be in the conversation.

As a religious leader, this is just another example of how religion can be used to manipulate people, power and money. In the United States, we have not seen the last of pundits positioning themselves as religious experts who blame LGBTQ people for hurricanes, tornadoes and earthquakes. We have not seen the last of the attempts to pit people of African descent in the United States against LGBTQ people. Implicit is the assumption that there are no LGBTQ people of African descent. But even these efforts are fading.

Sadly, the ugly side of religion is growing in Eastern Europe, Asia and Africa -- often interfaced with U.S. conservatives. For example, Scott Lively, now on trial for crimes against humanity, is a United States evangelical who propelled Ugandan Parliament Members to propose the "kill the gays" bill. Lively recently visited Russia to promote his anti-LGBTQ hatred in advance of the Sochi winter Olympics.

Despite this, there are also religious leaders in each setting who understand the core values of love and truth. Whether in Uganda, Ukraine or Russia -- whether Black civil rights in the United States or Apartheid in South Africa -- whether marriage equality or employment non-discrimination -- religious people are also on the side of the oppressed. We are willing to believe that the seemingly impossible is actually possible.

When Mandela sat in prison for 27 years, religious people from around the world worked to end Apartheid through divestment and by telling the stories of the atrocities of the regime. People did not know that Apartheid could ever be eliminated, but they knew they had to try -- and try -- and try. They told the stories, passed legislation, and lobbied boards and corporations to divest from South Africa.

Nelson Mandela's memorial service was on Tuesday, December 10, which is also Human Rights Day, observed annually around the world. It is time for people to take the next step for global respect and dignity -- including human rights for LGBTQ people throughout the world. Get involved! DO SOMETHING! Create a story that can be told to the next generations.