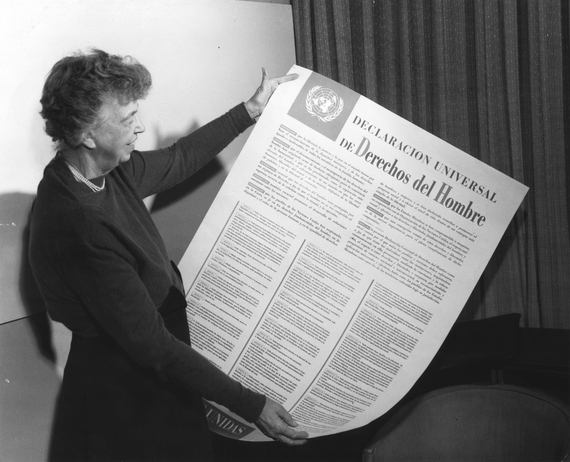 A visit to the Franklin Delano Roosevelt monument along the Potomac is one of the best experiences any American citizen can have. The four staged monument is absolutely powerful with water and great stones and verses from FDR. I take my visitors there and love it more than them each time.

As one enters the fourth term, there is a statue of Eleanor Roosevelt. A plaque of the United Nations behind her. While her presence was undoubtedly meant to be an honor since the FDR is the only memorial that includes a President's wife, it doesn't go nearly far enough for my taste. From the small size of the statue, the tiny hat she's wearing, the placement away from her husband and to the absence of her greatest work, the Declaration of Human Rights, the memorial falls short of telling her true power. Eleanor Roosevelt was the architect of the Universal Declaration of Human Rights (UDHR), the best document ever written for all the citizens of the earth.

FDR had to deal with the depression and the war. Without a doubt, he lifted the nation out of the doldrums and set in motion the great victory over Japan and Germany. These were hard realities that FDR had to deal with as President. In my recent memoir, Create Your Future, I describe how my mother had us get down on our knees every month when our social security check came and thank God for FDR. Those checks kept us fed after my father was killed when I was two years old. He used the radio to nurture a tired and poor nation into growing into a super power. Four great terms without fatigue.

Eleanor, upon FDR's death, went to work as a volunteer at the United Nations. An exceptional woman with instincts for fairness and decency, Eleanor knew how to make something happen. She could have chosen many ways to help humanity like most of the first ladies do. But Eleanor chose human rights. She chose standards by which all the people of the earth could live together. As did FDR, she believed the poor were as good as the rich, maybe better.

FDR in some sense was stuck with a depression and a war, neither of which he would have chosen. He made friends with Stalin, whose soldiers killed two out of three Nazi soldiers in the entire war. Eleanor in some sense was asking herself "what do we do now that the war is over?" Her answer was quick and decisive, and it is called the Universal Declaration of Human Rights (UDHR). The UDHR is the spine, the head, the arms, the feet and the torso of the modern day human rights movement.

In order to pass the document by the United Nations, Eleanor solicited the help of the Russians. Thusly, the UDHR has both left and right political agendas in the document. Her political skill along with her husband's relationship with Stalin helped her obtain the votes needed to pass the UDHR at a United Nations meeting in Paris in 1948. UDHR is a landmark of decency so big and mighty that it enters every national and transnational meeting in the world. It is the handle that clarifies the relationship between people and governments. Billions have benefited from this document and governments keep trying to bury this document for this very reason.

As we approach Human Rights day Dec 10, ask yourself how many have ever read the UDHR? How many even knew that Eleanor, a former First Lady, took the time to put into stone the protections we all need? Why has no First Lady ever adopted this document and made it her project? Why does less than 5% of the world even know of the document? Most lawyers in the United States have never read this. They should take a day off and do nothing but read it.

FDR dealt with the past and present. Eleanor added the future. To me, that statue is a kind and thoughtful gesture, but it just falls short of the magnitude of her contribution to our civilization as wall as our nation.

On the 49th anniversary of the UDHR, some of the best musicians in the world took a six week tour of the world in support of the UDHR. It was called the Human Rights Now tour. Supported by Reebok, the tour covered all five continents. We sold out every seat. In Toronto, I met John Humphreys, who actually did the work with Eleanor within the United Nations structure. I asked him if the HRN Tour was appropriate, or did it trivialize human rights? His answer was swift and upset, "The tour is far more than appropriate," he said, "it is the greatest thing to ever happen to the UDHR." Sadly, the brief moments of light from the tour was cut short by the fires that consumed the twin towers on 9/11.

It is time to bring the Universal Declaration of Human Rights back into the American narrative. As we work our way into the future with the massive changes of Chinese power and many second line nations calling for more authority, there need to be standards set so we all know what they are, together as a world of nations and people. It is time to dust off this document. It is time to get it into schools. It should be part of the agenda of every law school. As an honor and respect to Eleanor and Franklin, we Americans need to print the UDHR in our American passports.

Finally, take the present stature of Eleanor and place it next to her husband at the entrance to the monument. Then have her holding the UDHR as she looks out onto the Potomac. Then, a woman will be respected for her choice in marriage and her choice in what she did as a widow.