More than two dozen human rights organizations and criminal justice reform groups from around the globe joined together in a full-throated condemnation of the Indonesian government's execution of eight nonviolent drug offenders.

"Wherever they occur, executions for nonviolent offenses violate human rights,” a letter sent to President Barack Obama and other high-ranking federal officials Tuesday from the groups, which include nearly 30 other non-governmental organizations from the United States and around the world, reads. The letter demands that the U.S. do more to ensure its international aid used in the fight against drug trafficking does not contribute to cases in which people are put to death for nonviolent drug offenses.

In the face of repeated pleas for mercy from the families of those that were executed as well as the United Nations and foreign governments around the world, the eight convicted drug smugglers faced a firing squad at around 12:25 a.m. Wednesday, Indonesian-time.

“Indonesians should be ashamed of their government’s atrocity earlier today," said Ethan Nadelmann, executive director of the drug policy reform group the Drug Policy Alliance, a signee of the letter. "The execution of these eight people for non-violent drug offenses will do nothing to reduce the availability of drugs in Indonesia or other countries, or protect people from drug abuse."

"All it demonstrates," Nadelmann added, "is the savagery of which governments are capable."

The executed included Australians Myuran Sukumaran and Andrew Chan, Nigerians Martin Anderson, Raheem Agbaje Salami, Okwuduli Oyatanze, and Silvester Obiekwe Nwolise, Brazilian Rodrigo Gularte and Indonesian Zainal Abidin. They were sentenced to death for a variety of offenses ranging from intent to distribute marijuana to transportation of heroin in the country.

Indonesian authorities granted Mary Jane Veloso, who was also slated for execution, a last-minute reprieve after a woman who recruited Veloso to transport five pounds of heroin "voluntarily surrendered" to police in the Philippines on Tuesday.

Sukumaran was found guilty, along with Chan, for smuggling drugs and organizing the so-called "Bali Nine" drug smuggling ring. During his stay in prison, Sukumaran became an artist. His final painting, a heart dripping with blood, was signed by all nine individuals sentenced to death: 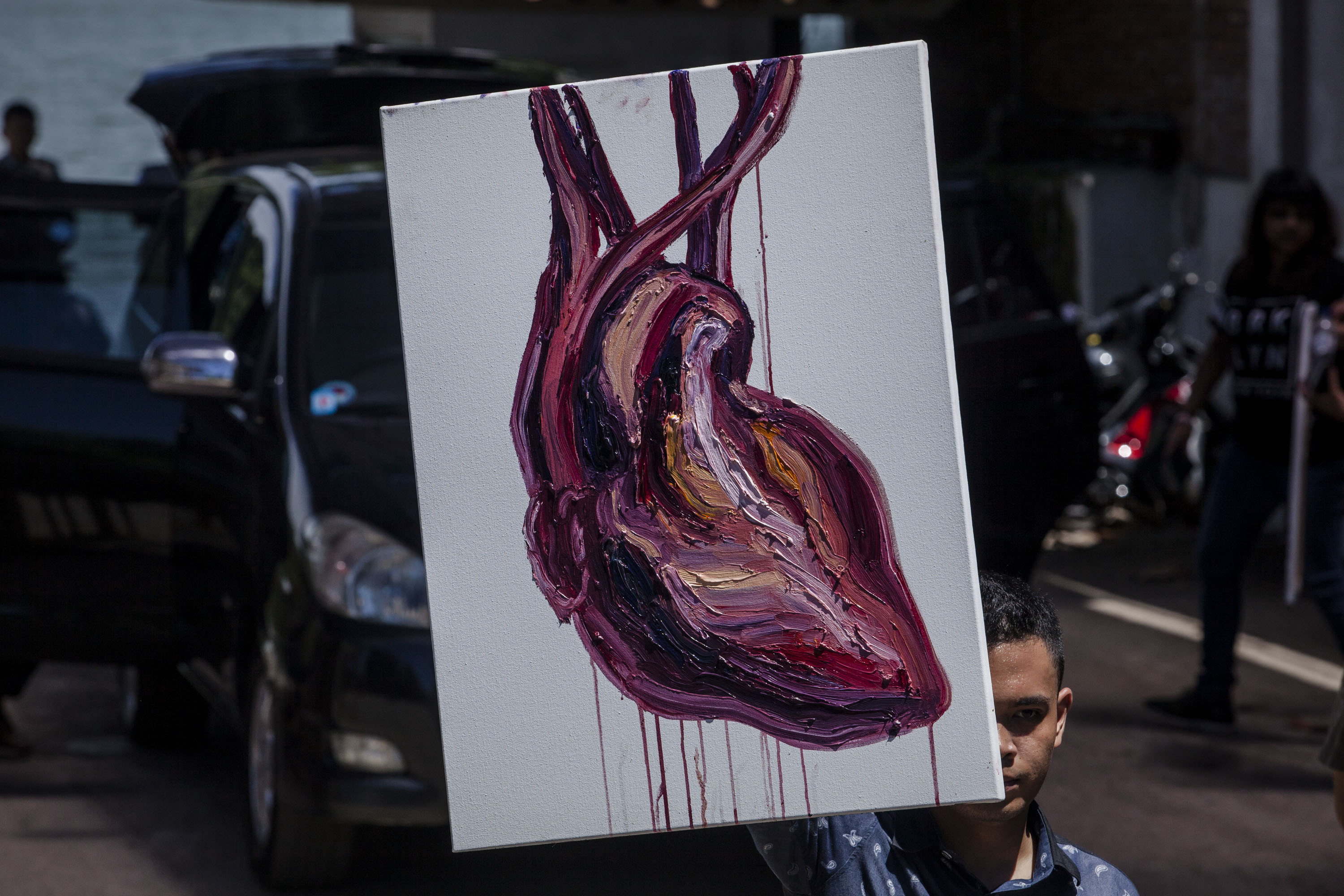 "Today we lost Myuran and Andrew. Our sons, our brothers," a statement from the families of Chan and Sukumaran released late Tuesday read, according to ABC News.

David Borden, founder of StoptheDrugWar.org and coordinator of the letter of condemnation, said that the time has come for the federal government to give priority to human rights in international drug policy. "We shouldn't be training people, writing checks and handing information over to countries that have the death penalty for nonviolent offenses without asking that human rights and our own constitutional values be respected," Borden told HuffPost in an emailed statement.

The White House did not return HuffPost's request for comment.

Cc: Ambassador Budi Bowoleksono, Embassy of The Republic of Indonesia in the US

As organizations concerned with US programs and policy, we further relate our concern that the US may inadvertently contribute to executions by extending counternarcotics assistance and cooperation to countries that apply the death penalty for nonviolent offenses. Assisting any government in a manner that leads to violations of the basic human rights of its citizens and foreign nationals is at odds with US values.

Unfortunately while these Indonesian prisoners are currently the most-publicized cases of drug-related government executions, similar executions occur in other countries as well, with little to no international outcry. For example, it was recently report that eight Iranians were hanged for drug offenses as well. Reports indicate that Indonesia's death row includes individuals who were low-level participants in the trade and suffered from addiction or mental illness.

Indonesian organizations have also argued that executions for drug offenses damage rather than protect the public's health. In a January Open Letter to Pres. Joko Widodo, over 30 NGOs wrote, "[T]he death penalty and executions [authorized in legislation passed in 1997] ha[ve] failed to lower the crime rate [or] to reduce the... number of addicts or drug users in Indonesia... [E]xecutions [of] illicit [drug] trafficking offenders [are] actually detrimental to the community [of] addicts [because] big drug dealers... continue to seek, find and exploit other vulnerable individuals who are forced to become... drug courier[s]."

Although the impact of US foreign assistance in leading to death penalty executions for nonviolent offenses remains to be assessed, a 2014 report found that assistance provided by European governments to Iranian and Pakistani law enforcement agencies was linked to more than 3,000 death sentences in those countries. The report noted that the governments of Denmark, Ireland and the United Kingdom, had withdrawn funding for supply side anti-drug operations in Iran, and that Denmark's Trade and Development Minister had stated that "the donations are leading to executions." It is likely that US law enforcement assistance to countries with the death penalty for drug offenses contributes to executions for nonviolent offenses as well.

When, on January 18, Indonesia began executing the 64 drug prisoners on death row for drug offenses, a number of governments recalled their ambassadors from Indonesia, and have since expressed their condemnation of Indonesia's policy. Additionally, attorneys have charged that Pres. Joko Widodo has violated Indonesia's clemency statute by failing to give individual consideration to these defendants' clemency petitions. In February, UN Secretary General Ban Ki Moon urged Indonesian Pres. Widodo to halt the executions. Meanwhile, however, the US has remained silent.

Accordingly, we call on the US State and Justice Departments to:

• investigate whether US intelligence or other assistance – as provided by the DEA's Jakarta Country Office, established in 2011 , and other US agencies – has contributed to the incarceration of defendants on Indonesia's death row or that of other countries;

• condition US assistance and cooperation on an agreement that the recipient government will not impose the death penalty for nonviolent offenses in cases in which US resources may have aided in the capture or prosecution of a defendant, with appropriate safeguards and verification procedures by both the US and recipient government; and

• establish procedures to ensure not only that US law enforcement and intelligence agencies consistently respect international human rights norms in their operations, but that US assistance provided to other countries' agencies also do not support or foster human rights violations.

We acknowledge the complexity of factors that involved in international relations, and we recognize that Indonesia is a strategic US partner in the region. Nevertheless, the US has an obligation to take the moral high ground on this issue, by leveraging its considerable influence as a partner to encourage Indonesia and other countries to move away from draconian punishments and toward a more humane justice system. At a minimum the US should address the role that our international law enforcement presence may contribute to disproportionate and rights-abusing criminal justice policies abroad.

Supporting NGOs in Other Countries:

CORRECTION: An earlier version of this story incorrectly stated that Myuran Sukumaran was Indonesian. He is in fact Australian. This article also misstated Sukumaran's age as 24. The story has been updated.