Donald Trump's inaugural speech has fittingly been described, as "dystopian," as "dark," as "a declaration of war." The new president made no call for unity, did not reach out to a soul not already in his camp -- despite losing the popular vote by almost 3 million votes -- nor uttered a word to bring together a fractured nation or address a world deeply nervous at his ascension to the most powerful of offices.

In the first few days as president, his actions mirrored his words. Trump has rushed headlong into creating further divisions and has begun an assault on human rights and basic decency -- including a de facto ban on many Muslim refugees from entering the United States and the resurrection of CIA "black sites" -- and promises more to come. 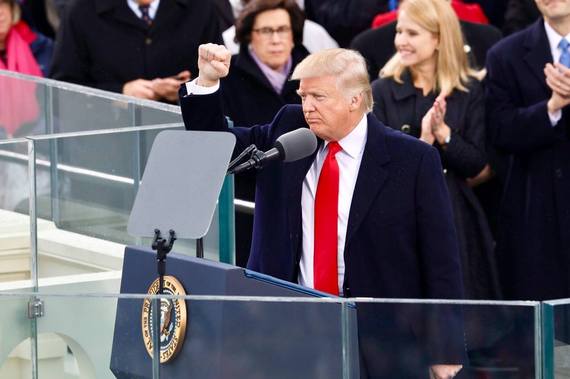 The new president exalts torture, mocks the disabled, casts aspersions on those who defend human rights, appeals to racist sentiments through coded and not-so-coded language and denigrates women in both word and deed. He shows no regard for the Geneva Conventions or the painstaking work of generations of human rights activists, many of them American, to ensure that civilians are not abused in times of conflict and that the vulnerable are protected.

For good measure, he seems to demean virtually every restraint that protects the citizen from the state. His first call as president to a foreign leader was to President Abdel Fattah al-Sisi of Egypt, who crushed the protests against army rule, devastated Egypt's civil society with draconian laws targeting human rights defenders and turned Egypt's legal institutions into "kangaroo courts." A chilling signal indeed.

Say what you will, Trump has clearly laid down the gauntlet that places the most powerful of nations on the side of the privileged and signals that human rights will be honored only in the breach. This can hardly be a surprise, given his campaign rhetoric that called openly for torture and other serious crimes that violate international and domestic law.

For me, the nadir of Trump's remarks in front of the Capitol echoed his campaign: "From this moment on, it's going to be America First." This phrase -- "American First" -- is a term loaded with historical meaning, dating back to Charles Lindbergh and the "America First" movement of the 1930s. At first blush it indicates a withdrawal from the world, but that movement is also strongly associated with anti-Semitism, racism and the white nationalism that is espoused by some of Trump's closest advisers.

The new president's inaugural speech was encased in other nationalistic slogans, most prominently "Make America Great Again," harkening back, at least rhetorically, to what many minorities, women and marginalized people remember as days stained by segregation, hate and discrimination on the basis of race, gender and sexual orientation.

I started my life in segregated schools in North Carolina and have seen up close the country's failure to protect an array of minorities and to implement the promises of the 14th Amendment and the Bill of Rights. Racial injustice continues to be a heavy burden on this country, as the events of Ferguson and elsewhere have shown. Much needs to be done to address the still-open sore of mass incarceration of African-Americans, police violence and a litany of other abuses of police power, as so well-articulated by the Black Lives Matter movement and other activists. Trump has no answer to this problem; instead, he demonizes minorities and callously rejects their legitimate demands.

Trump is on a road to undermine the progress that has been achieved. His appointment to the Supreme Court will certainly aim to undercut the steps that the court has taken over the past 60 years to, haltingly, make the Bill of Rights not simply a promise but gradually more of a reality. In the words of Dr. Martin Luther King, Jr., the promissory note of the Bill of Rights has gradually been paid down, but in Trump's vision this will stop now: One must have "total allegiance to the United States of America," presumably as he interprets it. The whiff of McCarthyism is in the air for those of us who do not define ourselves as allegiant to Trump's vision of America.

The inaugural speech and Trump's first actions also send powerful messages regarding the struggle for human rights across the planet. The consequences of his dark vision will be dire. The record of the United States is patchy at best in terms of promoting human rights abroad, but it has played an important role in a number of areas, commencing with Eleanor Roosevelt's work on the Universal Declaration of Human Rights.

While its record in Latin America and the Middle East has been particularly deplorable, this country has supported civil society groups in a number of countries and other international initiatives that have promoted accountability for human rights violations. It has worked with other countries and the United Nations to advance the normative agenda that has enshrined human rights in international law and broadly supported the human rights movement in areas such as individual liberties and women's rights. Mr. Trump will end these efforts in an obvious return to the old adage: "Governments can boil their own people in oil for all we care, as long as they support us."

This abdication of American support for human rights will not only undermine those countries that respect human rights but will also embolden those who seek to undermine the United Nations and other institutions that have advocated for and protected those rights. The emerging Trump-Putin partnership will mean that victims of human rights abuses around the world will have nowhere to turn to, as avenues to redress, accountability and acknowledgement of the violations close down.

The question is, what can we do? What is our responsibility as human rights defenders, but also as citizens of the United States and the world at large?

I was in New York City on Saturday, participating in the Women's March, and was heartened by the tremendous crowd and the energy to resist Trump's dystopian agenda. This is an encouraging sign, which indicates that vast segments of American society do not support Trump's agenda. But the concern has to be expressed that these marches may be like "Occupy Wall Street," a burst of energy but with little organization to follow up. We will need to think harder and deeper about how to resist an agenda that would erode the gains that have been achieved.

While there is not a single "silver bullet" to take on what we will face ahead, we need to move past "conversations" and start organizing. It is hard to imagine -- in this diverse and app-based world of today -- that a single organization can take the lead in such a movement, like the Southern Christian Leadership Conference (with lots of allies and competition, of course) did for the Civil Rights Movement. However, it is clear that a coalition of forces must emerge in American civil society to provide the backbone of resistance to the Trump agenda.

We cannot afford atomization along the lines of our specific causes, be they accountability for human rights violations, racial injustice, inequality, LGBTI rights, indigenous rights or other human rights causes we support. If we are to have a chance to stop Trump's destructive agenda, we must unite and act as a movement as strongly against the Dakota Access Pipeline as against a registry for Muslims or systemic police violence against African-Americans. Our goals in protecting human rights in the United States must be as clearly defined as our actions must be coordinated.

There also must be a revitalization of the Democratic party, which should take a page or two from the Republican playbook and be a genuine party of opposition and (when needed) of obstruction. Building on the energy of a progressive agenda, as illustrated by Bernie Sanders' campaign, needs to replace the Clinton approach of the 1990s that is responsible, in part, for the disaster of last November.

The time for action and resistance is now. I and the organization that I lead, the International Center for Transitional Justice, have over the years had a great deal of experience in addressing the abuses of regimes across the world that disregard human rights and commit abuses. Once rights and the institutions built to protect them are pushed to the side and the strong man reigns, the path to violations becomes real and the difficulties of re-establishing the rule of law become very steep indeed. The warning signs here in the United States are now laid bare. They should be a call to action for us all.