Another protest rally was dispersed Saturday night by Moscow police. The action was a part of the so called Strategy 31 -- a campaign in support of freedom of assembly guaranteed by paragraph 31 of the Russian Constitution. This basic right to hold peaceful demonstrations is routinely violated by the authorities: Major opposition rallies are banned, often without any legal grounds, their participants get arrested and beaten by the police. The situation is particularly bad in Moscow where all government institutions are located and authorities are especially rigid (although legislation is the same in all regions). 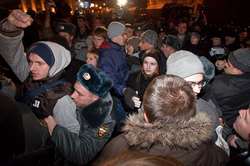 As a part of this Strategy 31, several human rights and political activists (as different as prominent Soviet dissident and human rights defender Lyudmila Alexeeva and radical left-wing opposition leader Eduard Limonov, for example) decided to hold a demonstration at Triumfalnaya Square in downtown Moscow on October 31. The action was, as usual, banned; the authorities explained that some kind of a "military-patriotic celebration" was planned for the same time at the same place. In order not to provoke arrests, organizers told participants not to bring any flags or banners or chant slogans. "How long will the police stay there?" they asked, and suggested that people should wait until the police leave the square.

The government had different plans, however. In order to find a pretext to arrest participants of the action, members of Rossiya Molodaya (Young Russia), a Kremlin-aligned youth group (a part of the so-called Putin Youth), were used as provocateurs. They began lighting flares, chanting slogans and throwing leaflets (mocking the opposition) in the middle of the crowd. The police were ready: They arrested the Putin Youth and many regular participants around as well as Limonov. The provocateurs were soon released without any charge while Limonov himself may face up to 15 days imprisonment for "disobeying police orders."

This provocation was also a signal to start a crackdown on the protesters, most of whom were standing steadily and silently according to the general plan. About 70 people were arrested. Police officers simply pointed at certain activists and they were immediately dragged into police vans. Many others were arrested for just being too close to the scene. Although no resistance was offered, policemen and soldiers beat people while dragging them. According to Russian bloggers, the police even went so far as to try to arrest an American diplomat, Vice-Consul Robert Bond who was observing the rally. Photos of Mr Bond surrounded by the police and showing them his ID card have been posted in many blogs. 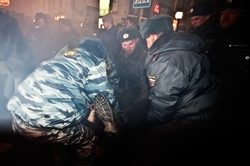 I was arrested while trying to tweet what I saw. Apparently, one of the officers recognized me. Along with some 20 more people in the bus I was taken to a police station where we were charged with ... lighting flares, chanting slogans and throwing leaflets -- the ones that the Putin Youth were throwing. As the police officers were filling in the papers with these fake charges, we looked at the walls of the police station's lecture hall. Portraits of proud police officers as well as of Vladimir Putin and Dmitry Medvedev hung there next to Yagoda, Ezhov and Beriya, the three heads of Stalin's NKVD and Gulag.

As democracy and civil rights in Russia are diminishing with every year, the country is becoming more and more a police state. The voice of dissent is silenced by cynical and cruel country leadership. At the same time, Western public opinion and governments generally turn a blind eye to this trend in hope to buy the Kremlin's favour.

PS: Two days before the event, police SWAT had a drill in the nearby-Moscow city of Balashikha. They were trained, according to the script, to disperse "a group of senior citizens who demanded social support and blocked a federal highway." In order to do this, the whole arsenal was used by the police: water cannons, stun grenades and tear gas. The "pensioners" were blocked, many arrested. Bloggers called it ironically a "Russian welfare service."