In two recent articles I addressed imagery in advocacy efforts against human trafficking. In the first article, I discussed negative effects from the overuse of images that portray violence in child sex trafficking. In the second article, I addressed the overwhelming objectification of victims. In my online research, I was surprised to find very few campaigns directed at victim outreach efforts.

One such campaign from the National Human Trafficking Resource Center (NHTRC) uses an image on billboards to promote the NHTRC hotline to potential victims. The image depicts a female dressed promiscuously and leaning into a car window possibly engaging with a buyer of commercial sex. "I like it because it's real," says Tanya Street, a survivor of sex trafficking and Founder of Identifiable Me. I agree with Tanya -- this image captures exactly what I looked like as a so-called "willing victim", a term which I discuss in my book, Walking Prey: How America's Youth are Vulnerable to Sex Slavery. I think this image would have resonated with me had I seen it in Atlantic City, N.J.

The billboard states in bold letters: Is someone controlling you? We'll listen. We'll help.

I can't say if this particular question would have reached me. As a 14-year-old, I didn't fully understand that I was being controlled or manipulated. Tanya Street agrees: "I think even at 18 years old, I would not have felt like that applied to me. I thought I chose that life in the beginning, then [I believed] everything became my fault because of my choice." Of course, there are many victims who do understand they're being forced or coerced against their will.

Many states are passing laws that require posting of the NHTRC hotline in various locations (e.g. strip clubs and public restrooms) with the intention of reaching victims. However, I worry that some of these efforts are ineffective (especially when created without consulting the NHTRC and/or a vetted group of service providers and survivors). For example, I recently stopped at a Maryland rest area and spotted a sign in the women's bathroom that read:

Are you or someone you know being sold for sex or made/forced to work for little or no pay and cannot leave? Call the National Human Trafficking Resource Center at 1-888-373-7888 for help. All victims of slavery and human trafficking have rights and are protected by international, federal, and state law...

As a 14-year-old kid, I don't think I would have noticed this sign -- it looked more like an inspection notice than a public service announcement. Furthermore, I can't imagine I would have related with the words "slavery" or "human trafficking", at least not based on the information provided here. On a different road trip, I came across another sign that instructed me to call for help if I was being forced to have sex without consent. Again, as a teenager, I didn't understand that I was being forced or manipulated. Without any additional explanation or appropriate imagery to catch my eye or provide some context, I'm sure I would have washed my hands and walked right past these signs.

"When I was in the life, I thought I was alone. Then I found help from other people like me."

"When I was being bought and sold, all I wanted to do was get high. Now I'm getting my high school diploma."

"I depended on my pimp for everything and had nothing. Now I have my own apartment, car and money."

Each poster promises "I got out. U can 2." Pretty powerful.

The team that created this campaign pro bono included Suzanne Boutilier, Genice Jacobs and Jed Davis. "We used actual quotes from survivors, which were edited by Suzanne... but, they are the words used by survivors," Genice stated in a personal email. For additional information or advice on how to launch a similar campaign, contact Genice at AbolitionistMom.org. 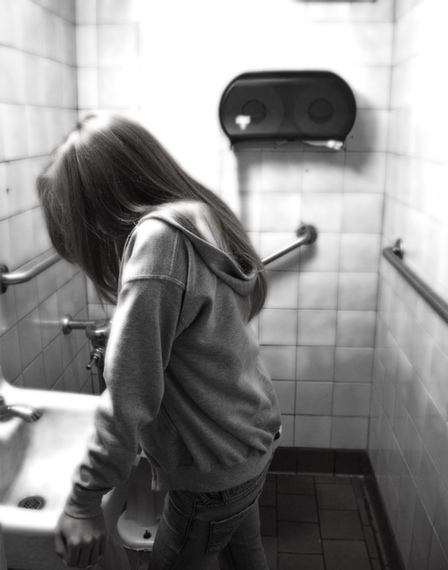 I encourage advocates and legislators to consult with survivors directly in their outreach efforts. For example, the national anti-trafficking organization, Truckers Against Trafficking (TAT), had the opportunity to create a poster with the purpose of reaching child victims of sex trafficking at truck stops. After consulting with survivors, TAT hired survivor and artist, Sherry Dooley, to create the image above which was to be posted in public restrooms. I can say with certainty that, as a 14-year-old runaway, this poster would have caught my eye, and I would have identified with the girl in the image. A quote that might have worked for me: Are you a teen runaway? Are you caught up in prostitution? The National Human Trafficking Resource Center can help: 1-888-373-7888.

Tanya Street agrees that the concept of "getting caught up in prostitution" is a message that would have reached her as an adult victim of sex trafficking.