Margaret Howard became a victim of domestic human trafficking at 13 years old, when she ran away from home and was later picked up on a southern Illinois interstate amid passing motorists -- then drugged and held against her will.

Now 53, Howard is a therapist, social worker and policy advocate in Missouri, where she helps advocate for and support the 27 million people held in modern-day slavery worldwide.

Although Howard has difficulty telling the details of what happened when she was kidnapped in 1972, she wants to create more awareness around trafficking as a domestic problem, an issue she says makes most people balk and say, "Not in my backyard."

"We're able to look at children in exotic places -- Cambodia, the Philippines, Nepal -- and say, 'How could parents allow their children to be bought and sold this way, and how is it they're ostracized when they come back to their villages?'" she told The Huffington Post.

But Howard lived such a story in the Midwest, she said. She and a friend had been hitchhiking on Interstate 57 in southern Illinois when they were kidnapped and taken to a home in Cape Girardeau, Mo. "Suffice it to say there was someone making a monetary profit off my suffering," she wrote in a blog for the St. Louis Beacon.

She's not sure how she managed to escape but she was dropped back off on the highway, presumably when the traffickers weren't around, she said. The police picked her up and she was held in a cell overnight with no food, water or bathroom.

After the ordeal, she said she felt ashamed and, knowing her family, was afraid of how they would react. So she kept it a secret for years. "All the messages were pretty clear: There are good girls, and there are bad girls," she said. "Things like that didn't happen to good girls." She ended up paying for therapy herself.

She likened the tactics some traffickers use to a typical boy-meets-girl-at-the-mall encounter. "Anyone is actually vulnerable," she said. "If a guy is able to cause butterflies in her stomach and show he's either in love with her in a Justin Bieber-y way or flat out, 'Now you're in my house and you can't leave' way, that is how it's done."

Now, Howard has made it her life's work to fight trafficking. Along with her therapy and social work, she is a consultant for the Coalition to Abolish Slavery & Trafficking. She and many other policy advocates are calling for the renewal of the Trafficking Victims Protection Act (TVPA), which would provide resources for organizations protecting modern-day slaves engaged in forced labor and sex.

One solution pushed by such groups is the passage of Safe Harbor Laws, which would provide training for law enforcement to recognize trafficking and require protocol for when children are picked up by police, said Carol Smolenski, executive cirector of ECPAT-USA, a network of organizations fighting trafficking. Another important step is establishing more housing and resources for vulnerable populations -- for example, homeless teens and foster kids who age out of the system.

Smolenski said lack of awareness is part of the trafficking problem in the U.S. "Authorities aren't trained to see the difference between a victim and perpetrator," she said. "A child is arrested for prostitution when they're under the control of a trafficker. We need more training of frontline personnel to recognize this."

Howard added that awareness is necessary for victims as well. She said it took her a long time to realize that what she experienced was human trafficking.

When she was searching for volunteer opportunities after the tsunami in Indonesia in 2004, she incidentally came across information about forced sex and labor. She initially found it hard to accept the idea that people were still bought and sold. Once she went to school for a degree in social work and read case studies of people being trafficked, she made the connection to her own experience.

"It just hit me one day: 'Oh, my God. These stories, they sound just like what happened to me," she said.

For Howard, serving as an educator and protector for her own children has been part of her motivation. "That's what this work is about. Creating a world that children can trust." 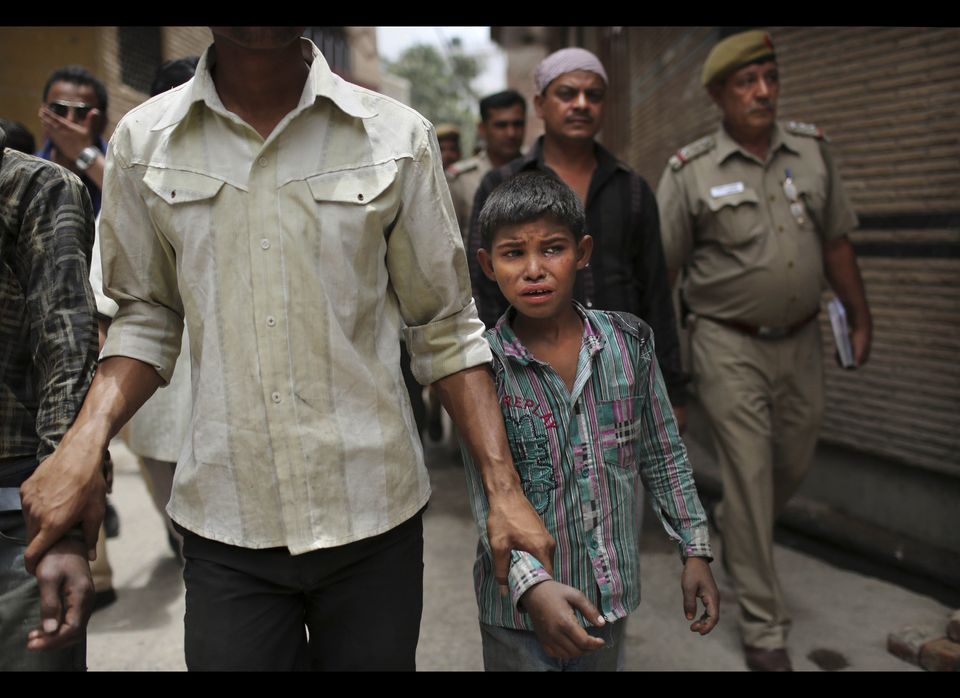 1 / 10
World Day Against Child Labor
A young Indian bonded child laborer cries as he is walked away after being rescued during a raid by workers from Bachpan Bachao Andolan, or Save the Childhood Movement, at a garment factory in New Delhi, India, Tuesday, June 12, 2012. (AP Photo/Kevin Frayer)
AP