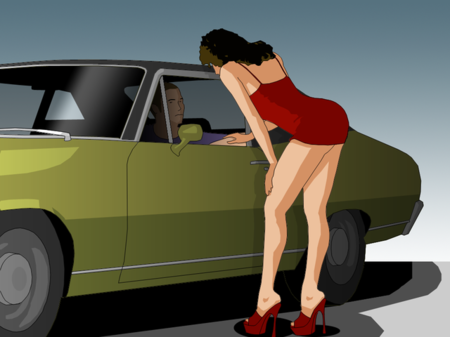 The nature of injustice is that we may not always see it in our own times. The generations that wrote and ratified the Bill of Rights and the Fourteenth Amendment did not presume to know the extent of freedom in all of its dimensions, and so they entrusted to future generations a charter protecting the right of all persons to enjoy liberty as we learn its meaning.

As if in answer, on August 11 Amnesty International passed a resolution calling for the global decriminalization of sex work. Human trafficking activists howled in protest. Cindy McCain, writing as chair of the Human Trafficking Advisory Council, thundered her denunciation of Amnesty International's proposal in the Washington Post:

Sex work and sex trafficking cannot reasonably be separated. Sex work fuels the demand for commercial sex, which is the indisputable driving force behind the sex-trafficking industry....This proposal tells women, men, and children that sex work is a safe and accepted choice.

Nonsense. You don't have to approve of the buying and selling of sex to see the wisdom in Amnesty's proposal. I'm certain that humanists, along with everyone else who considers themselves a civilized human being, would join unanimously to oppose human trafficking, defined in federal legislation as the child sex trade, along with "peonage, slavery, involuntary servitude, or forced labor." However, the conflation of these evils with consensual commercial sex is wrong.

It makes for strange bedfellows, to say the least. Conservatives who normally trumpet the virtues of the free market join hands with liberals who normally uphold the rights of consenting adults to denounce the decriminalization of commercial sex. Why is that?

The answer, I suspect, lies in deep-seated moralistic feelings. How else could a blatantly illogical claim like "sex work and sex trafficking cannot reasonably be separated" not only appear on the pages of the Washington Post but also in one of the few bipartisan bills to pass Congress this year?

That statement only makes sense if it taps into unexamined beliefs such as "no one would enter sex work unless they were coerced." As uncomfortable as it makes us, in the interests of justice we must question such assumptions.

So, let us ask: Why should commercial sex between consenting adults be criminal? Writing in the New York Times, Rachel Moran, a former sex worker, bluntly rejects the Amnesty resolution: "Implementing this policy will simply calcify into law men's entitlement to buy sex." Moran tells a gut-wrenching story of her experience as a desperate teen sucked into prostitution: "For seven years, I was bought and sold. On the streets, that could be ten times in a night."

As the father of two daughters, I find Moran's account heartbreaking. Beyond a doubt most women who enter into sex work are driven into it, either by desperation, coercion, or both. But that is not universally the case, and more to the point it need not be so. Moran's tale is precisely the kind that Amnesty hopes to relegate to history through decriminalization. Illegal brothels are by definition unregulated brothels. And this is not only about men paying to have sex with women.

Enter Rentboy. On August 25, federal and city authorities teamed up to raid the offices of the online male escort service. Rentboy's CEO and six of its employees were charged with running a prostitution ring. The action left gay activists fuming, as many wondered if this is the new meaning of equality. Rentboy, after all, has been in business since 1997, and its online presence was hardly a secret.

A gay escort tells Gawker: "The people at Rentboy weren't doing anything wrong -- they were doing something illegal... It's like that line from The Simpsons: 'Their only crime was breaking the law.'" He goes on to say that becoming a sex worker made him feel attractive, empowered and financially free. More than a decade later it remains a fulfilling part of his life.

Obviously, male sex work bypasses a raft of feminist issues. Gender inequality simply doesn't enter into same-sex commercial arrangements. But this raises an awkward question: Can we contemplate a double standard for sex work? Should we take a libertarian stance for gays and a protectionist stand for women? Surely, that would be the most patronizing response of all.

Perhaps the most important question raised by the Rentboy raid is this: Why is it legal to sell companionship but not sex?

Instinctively, we know there's a difference. There is something special about sex. All societies regulate it. They do so in line with the moral instincts of those who wield power, often articulated by scriptures they take to be holy.

Evolutionary insights offer a deeper understanding. Selling companionship is legal because friendship doesn't produce offspring. The motives of those who regulate sex are primarily to assure the paternity of their offspring, and secondarily to protect their social status in relation to their wives and daughters. To the extent that women have been able to influence sex codes, they also enforce obligations on men to provide for their legally recognized offspring.

Yet, despite the universality of regulation, commercial sex arrangements continue. This is likely because monogamy runs against the reproductive instincts of men. Genes also undermine fidelity in women, but in fewer instances and in more selective ways. Yet, regardless of private behavior, it is also in everyone's interest to publicly condemn commercial sex. Hence, "slut shaming" and the paradox of the "world's oldest profession."

Moral instincts are the wellspring of ethics, but, like sexual instincts, they don't always serve us well. It's precisely the questioning of moral instincts that has led the straight majority to at long last embrace the equal rights of lesbians and gays, and to begin a reconsideration of transgender.

Good journalistic practice calls for full disclosure. Relax, I'm not going to recite my sexual resume. I will simply say this: I have no more interest in the services of Ashley Madison than I do in those of Rentboy, which is to say none. I do have an interest in advancing good public policy.

For sheer futility and hypocrisy, this ranks in the pits with the "War on Drugs." We cannot eliminate the demand for commercial sex by outlawing it. If we have to wait for that demand to abate before doing something about human trafficking, the job will never be done.

Historians debate whether or not Prohibition "worked." Some say it did, because overall alcohol consumption briefly declined after passage of the Volstead Act. (It bounced back as Al Capone and others plunged into the market.) The real lesson of Prohibition, however, is that criminalizing "vice"--the consensual private behavior of adults that we publicly disdain--not only fails to eliminate it but comes at a terrible price. It inevitably gives rise to violent, amoral criminal enterprises.

Legalization does not mean anarchy. Liquor stores today are not run by bootleggers or gangsters, and although there's been a slight uptick in per-capita alcohol consumption recently, the long-term trend is down -- way down.

Public education campaigns are far better public policy. While they may not eliminate undesirable behavior, they can drastically curtail it. Since the Surgeon General first warned of the hazards of tobacco, legal cigarette smoking has fallen by more than half, while illegal use of marijuana has spread to more than half of young Americans.

Sex is special, of course. Jealousy is a powerful instinct, and so commercial sex threatens marriages and other established sexual relationships. That's deeply painful. But keeping sex work illegal only makes things worse all around. It subjects sex workers to coercion, abuse, and even slavery, and it makes the spread of sexually transmitted infections all the more likely.

We humanists don't believe in angels, and the law certainly cannot perfect us. If we can accept ourselves as nature has fashioned us -- flawed, self-contradictory beings -- we can strive for optimal rather than utopian policies.

----
This essay first appeared in slightly different form at TheHumanist.com