This year's International Women's Day comes at a difficult time. The brutal sexual assaults and harrassments described by women at Cairo's Tahrir Square last month were a visceral reminder of the ongoing subjugation suffered by so many women and girls around the world. Abuse and humiliation of women is an outlet for rage, addiction, dominance and control and, at times, a tactic of war. As my friend and writer Nicholas Kristof recently wrote in his forward to my memoirs: "The central moral challenge of the 19th century was slavery, and in the 20th century it was totalitarianism. In this century, the equivalent moral challenge is to address the oppression that is the lot of so many women and girls around the world."

We are all guilty of discounting difficult realities. At home in the United States, we often ignore the unacceptable daily facts facing women worldwide -- the thousand women who die each day in pregnancy or childbirth, the tens of millions of girls who are kept out of school, and the millions more who are regular victims of violence and abuse. A few years ago, in my role as Global Ambassador for the health organization PSI (Population Services International), I visited a Kenyan brothel -- it was a scuzzy flea-bag flophouse on a teeming street in a broken-up, tough part of town. Rooms were rented in 15-minute intervals to exploit prostituted women who often fought over clients, so desperate were they to survive.

I met a woman there name Shola, who was not as hardened as many of the other women I've met in brothels in 13 countries. Shola was a teenager -- six-feet tall, rail thin and heartbreakingly gorgeous. She was one of seven children. Her mother died in an accident when she was 12; when she was 15 her father died of tuberculosis. Her father's relatives took their land and she was left alone, in charge of her siblings. She dropped out of school and tried to make do. At 15, she found out she was pregnant. At 18, she was pregnant again. This time, her boyfriend left her.

Two months pregnant, hungry, with no education, no skills and her health collapsing, Shola made a poor and disempowered woman's classic "choiceless choice." Every day at 9 a.m. she would take the bus to the crowded street where Imet her, and she would sell herself to strange men for sex while a neighbor watched her child. She earned a dollar on her back, two dollars on her hands and knees. Struggling to feed her growing toddler for whom her breast milk was not enough, she worked until her eighth month of pregnancy, and was having exploited sex again a month after delivering. She was innocent and fragile. And she was so ashamed of what she was doing. 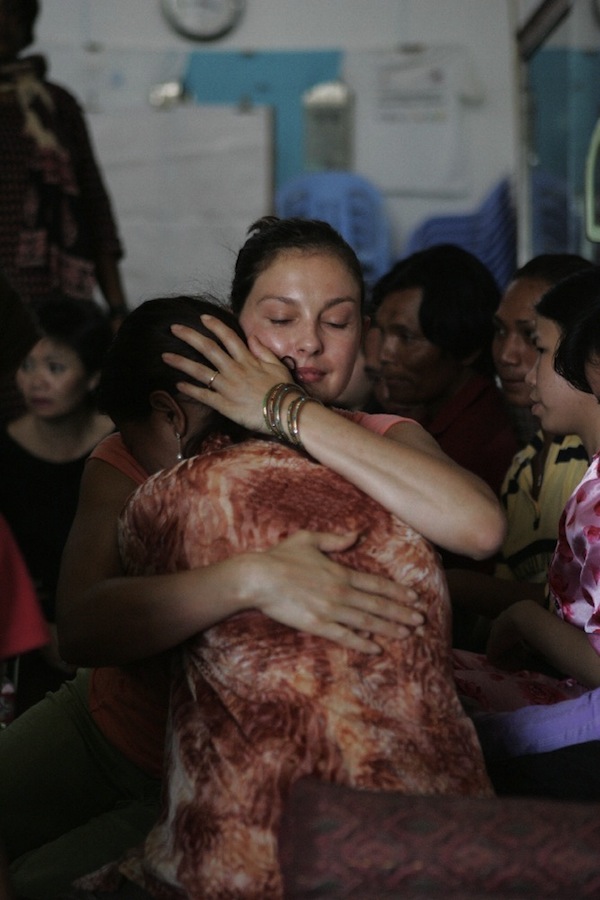 It's easy to distance ourselves from Shola's agonizing lot in life and to ignore her story on a day like today. But we must remember that her life is not so different from our own. She is a woman with incredible potential, dreams and hopes. My own mother was a high school senior when she found out she was pregnant. She took money out of her piggy bank to secretly hire a cab to visit our family doctor and confirm the pregnancy. When the doctor found out she was pregnant he wept; when my grandmother found out, she screamed. Like Shola, my mother had to drop out of school and was forced to move out of her family's home.

Fortunately for my mother, she was born here in the United States, And unlike Shola, my mother had grandparents who, despite the dramas, pitched in to help, and a boyfriend -- my father -- who adored and helped care for his girls.

Thanks to these important blessings, in spite of her own considerable hardships, my mother was able to raise a healthy, productive family. Shola doesn't have those same opportunities, and her situation puts her life and her family's at risk. Every day, she's exposed to lethal sexually transmitted diseases like HIV and further unintended pregnancies. And when she is not healthy and strong, her children can't be either. Children who lose their mothers at a young age are 10 times more likely to die prematurely than those who have not. For Shola and millions like her, the onus lies on us to help as much as we can to create opportunities for her and her family to live healthy and happy lives. If we want peace, we must.

As a start, I encourage all of you to honor and remember Shola today by educating yourselves and those around you. I read a perplexing poll that said that the majority of Americans believe that 25 percent of our federal budget goes to foreign aid. Actually, the United States Agency for International Development (USAID) receives only one half of 1 percent of the federal budget for foreign aid. I hope you'll take some time to learn where that money goes and how USAID and all Americans are improving the health of millions of people in the developing world in HIV/AIDS, malaria, child, maternal, reproductive health, and tuberculosis. I also hope you'll focus on what more still needs to be done to help women like Shola. Even if all you can do is spread the word, it's something. Eli Weisel said to fail to transmit an experience is to betray it. In a world of difficult problems, that is a challenge that you can meet. The time is now, and our sisters across the world are waiting.

Ashley Judd is an actor and philanthropist currently serving on the board of directors for the global health organization PSI (Population Services International, as well as other NGOs). Read more about Shola and Ashley Judd's other travels in her upcoming memoir All That is Bitter and Sweet.