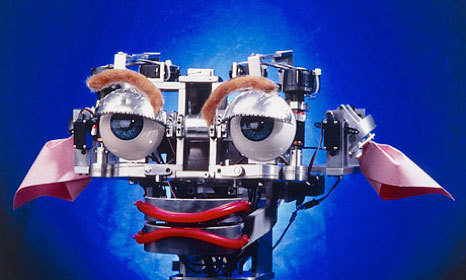 After the recent week(s) in which media gave more attention to religion than at almost any other time, our Sightings resources this week include no reference to religion, though their subject will have enormous consequences for religion in public and private life.

We are referring to "How Robots & Algorithms Are Taking Over," an important book review by Sue Halpern of Nicholas Carr's The Glass Cage: Automation and Us. (The review is easily accessible; you might want to read (or reread) it before reading on. See "Sources" below.)

We can't recall any attention to robots, algorithms, or akin topics in our 1000-plus weekly Monday Sightings through the years, though we have made use of instruments which depend upon them, as Halpern briskly describes them. Like "everyone else," we use and take for granted their products, however ineptly some of us may draw upon and contribute to them.

People in my profession, namely historians, can achieve in seconds what took my generation, in its beginning years, weeks and months. Picture me combing through Martin Luther's 100-plus volumes of double-columned small-print text to see what he called the people we now call Muslims. Thanks to a new digital instrument, I found out almost instantly. Etc. etc.

Carr properly envisions the future in which the human factor declines. The nearest reference to religion appears in a line in which Halpern asks, with Carr, what "the effects of automation are on our very humanness -- what makes us who we are as individuals" and what Tesla's Elon Musk of Silicon Valley asks, whether "automation's holy grail," artificial intelligence, will mean "summoning the demon."

The book review and the book reviewed show how, periodically, absolutely pessimistic visions of the future have been exaggerated, yet "we" survived. Probably in each projection of such visions, humans overlooked some element or other which called for revision, not fated submission.

What about Sightings? Its Monday author, M.E.M., is not given to apocalyptic nightmares about the future, but prefers to talk of "hope" (as opposed to "optimism"). But this time around there are reasons for concern as never before.

As I read the sources this week, both authors are not writing from heavily ideological economic or political vantages. They simply describe what happens as realm after realm of human activity gets replaced by automated processes.

The review mentions Oxford researchers Carl Benedikt Frey and Michael Osborne, who predict "that nearly half of all jobs in the United States could be lost to machines within the next twenty years." Can politics or industry be trusted to guide "us" into and through such futures?

Every page prompts more questions. If robots and algorithms profit those who own "the machines," while the middle class and poor are permanently out of work, where does "justice" come into play? How to deal with permanent joblessness and corollary idleness?

We'll watch for responses that address these questions from humanists and the religious alike. Think of how webbed the definitions of humans in relation to their work have been in Christianity, Judaism, and many other faiths. If responses are to come -- and we'll report on some efforts -- it is possible that they will dwarf the issues, which have preoccupied serious religionists in our time in "the culture wars."

Halpern, Sue. "How Robots & Algorithms Are Taking Over." Review of The Glass Cage: Automation and Us, by Nicholas Carr. New York Book Review of Books, April 2, 2015.

Photo: Kismet, the first robot capable of responding to emotion in the human voice by altering its mechanized facial features appropriately; it was built by Cynthia Breazeal in the late 1990s while she was a student at MIT; Credit: Dag G / RobAid creative commons.