One hundred years ago, an exhibition debuted in Oslo, Norway, consisting of 80 individuals of African descent put on display in a "human zoo." Titled "The Congo Village," the attraction was part of a centenary celebration of the Norwegian constitution, a gathering that's gone down in history as an unsavory instance of exploitation and xenophobia.

Now, a century later, that same exhibition is set to be reenacted by two bold artists attempting to draw attention to a piece of Europe's past that is largely ignored in mainstream culture. Mohamed Ali Fadlabi, of Sudan, and Lars Cuzner, of Sweden and Canada, are calling their project "European Attraction Limited," an attempt to challenge notions of postmodern racism and the treatment of minorities today through historical reenactment.

Fadlabi and Cuzner came across the existence of Norway's "human zoo" back in 2011, and were immediately stunned by the lack of awareness around the controversial historical event. "We started this project out of an interest to learn more about the general public's take on ["The Congo Village"], but it turns out that almost no one in Norway knew that it had ever happened, even if they had knowledge of human zoos in other countries," the artists wrote in an email to HuffPost.

In an attempt to understand how such a cultural phenomenon could be wiped from popular consciousness, the artistic duo opted to recreate the 1914 exhibition, bringing issues of racial inequality to the forefront of the 200th anniversary of Norway's constitution, planned for this year. "We couldn’t waste this opportunity to challenge the very specific nation-building project that has influenced the Scandinavian self-image of goodness," the artists explained. 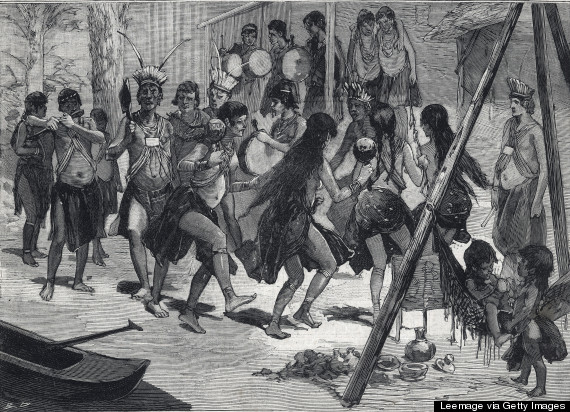 An engraving from the French newspaper Le Petit Parisien on March 13, 1892, depicting a "human zoo" of indigenous peoples from the Caribbean at the Jardin d'Acclimatation in Paris.

They have already begun the process of building the exhibition, putting out a call for volunteers to serve as their village's contemporary "extras." Unsurprisingly, the artists have experienced both positive and negative feedback since announcing the project nearly three years ago. Fadlabi and Cuzner claim they've received violent threats from both neo-nazi and anti-racism organizations. Meanwhile, academics and curators have praised the project's potential to provoke dialogue.

"The significance of Cuzner and Fadlabi’s project is both historical and absolutely contemporary," writes Will Bradley, director of Kunsthall Oslo, "since it has the potential to once again address the same, unresolved and still modern questions of the political and economic rights of all people, including, but not limited to, those colonized and oppressed by the European adventures in Africa."

The original human zoo, opened by the King of Norway in 1914, showcased African men, women and children housed in palm-roof cabins, surrounded by "indigenous" artifacts. According to The Art Newspaper, a total of 1.5 million visitors attended that exhibition -- which lasted for five months in the heart of Oslo -- amounting to more than half of Norway's population at the time.

Fadlabi and Cuzner's version, funded in part by Public Art Norway, will debut on May 15, and they are accepting requests to participate in the project on their website here.

"We welcome anybody from anywhere in the world who believes in the importance of the discussion about colonialism, the evolution of racism, equality," the artists write on their website. "'The Congo Village' [is meant] to question the collective loss of memory, the nation building process, the message of Norwegian goodness."

You can hear more discussion on the implications of "European Attraction Limited" on the artists' website. Let us know your thoughts on the provocative endeavor in the comments.

Historical footage of the 1914 centenary celebration in Norway.