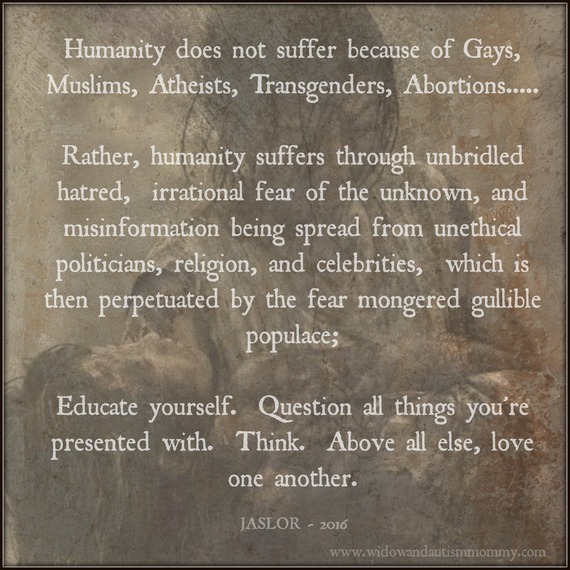 I made the decision to leave Facebook a couple of months ago. I found that the reasons I had joined Facebook to begin with (Widow support groups, and support groups for parents with special needs children) were not as prevalent as they were in the beginning, and that in fact Facebook was starting to become more draining on my spirit, than uplifting. I couldn't be on facebook for more than a few minutes before being bombarded with mass amounts of attempted indoctrination for politics, religion, and lifestyle choices. Not only were there memes being presented, but links to websites, articles, etc. What I found alarming, was that so many of these little nuggets of "truth" were being spread and taken as doctrine without being verified. It weighed heavily on my heart seeing so much hatred being brought out simply because there is so much power behind our fingertips, and virtually no critical thinking skills being utilized. One can say what they want with little chance of being held accountable for their words.

One thing in particular that procured my interest however, is how certain groups of people would ban together to form a herd mentality unlike anything I've witnessed simply because of their commonality, in spite of what the topic at hand was. The most prominent example of this that I can think of at this time is when the story of a husband and wife who's toddler had passed away of meningitis was at the front and centre of media attention. (I will not delve into specifics of this story, as I intend to write a lengthy post regarding this situation at another time) What drew me into this particular story was the headline of "Anti-Vaxxer parents charged in death of toddler". I was guilty, and immediately re-posted this story to my wall with a less than pleasant commentary, as anyone that knows me, knows how passionate I am about vaccination truth. A dear family friend who happens to know this couple urged me to question the article that I had read before drawing any conclusions. So I did. I read, and read, and read and read until hours, then days, then weeks had passed. I followed this story throughout the entire trial. I read articles both for and against the parents. I felt as though with all of the garbage media out there, I was able to obtain as much factual information as I possibly could, I then utilized my critical thinking skills and formed my opinion thereafter. What was troublesome to me, was this particular couple were members of a fairly prominent church in their area, and without question, they had a swarm of defenders in the church. It is wonderful that they had support, but the ignorance of some of these people was reprehensible. To blatantly ignore facts that were presented (I don't mean "facts" on less than reputable news sources, I mean FACTS that could be verified through a number of sources...) simply because they shared a commonality in their religion was abhorrent to me.

I suppose it is much easier to stand with a group, than to stand alone. But that doesn't make the stand right, or okay.

At one point, because enough people stood behind it, slavery was okay. At another point in time, women being excluded from basic human rights such as voting was okay. Not that long ago, it was okay to exclude homosexuals from the basic human right of being able to legally marry the one they love, and there are still people who believe that this is wrong.

How many people need to suffer, how many people need to be persecuted, even unto death until we realize the only thing that matters in this life? Love. That's it. Truly. It IS that simple. When one puts aside their human ideologies for a moment, and breaks down the true priorities in this mortality, the only logical conclusion is that love is it. When on one's death bed, no one hears about people asking to see their university degrees, or wanting to sit in their beloved Ferrari. Nor do they make a point of ensuring people know they voted Republican vs. Democrat or vice versa. What the focus is on in their last breaths are those whom they loved, and cherishing the memories forged over time.

Humanity does not suffer because of Gays, Muslims, Atheists, Transgenders, Abortions.....

Rather, humanity suffers through unbridled hatred, irrational fear of the unknown, and misinformation being spread from unethical politicians, religion, and celebrities, which is then perpetuated by the fear mongered gullible populace;

Educate yourself. Question all things you're presented with. Think. Above all else, love one another.

Autism Mom and Adovate for awareness, Photography enthusiast, Self proclaimed foodie, Hockey fan, GOT lover and cherisher of life

If You Liked ‘Station Eleven,’ Here’s What To Watch And Read Next

34 Cleaning Products For Anyone Who’s Frankly Insulted By Messes