This week as the brutal 'War Against Nature' raged on, the conscious world fought back as hundreds of thousands of people from around the globe united in their disgust of a meaningless, callous woman named Melissa Bachman as she gleefully boasted of killing a lion - apparently, she has an aversion to owning a digital camera and a fear of being unarmed and up-close with a wild beast.

Hundreds of millions of people around the globe love and protect animals - and animals know it, always showing their unstinting respect and love for humans. I dedicate this story to each and every person who believes it's time for an amnesty with the Animal Kingdom - now! 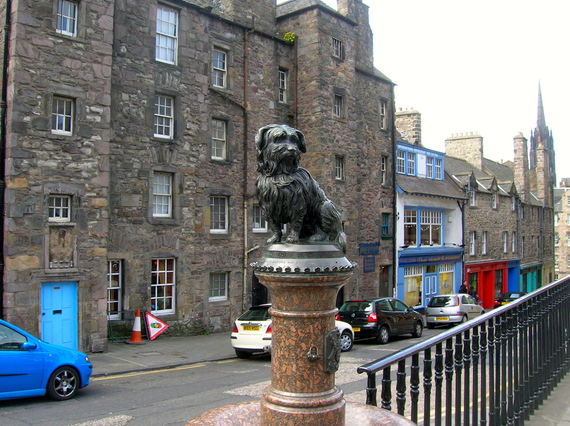 Statue of Greyfriars Bobby on the street outside Greyfriars Kirkyard cemetery.

Over 150 years ago a Skye Terrier named Bobby became an icon - now known as 'Greyfriars Bobby' - for mourning his master's loss. Bobby belonged to John Craig, an Edinburgh policeman who was buried in Greyfriars Kirkyard cemetery. For 14 years, Bobby sat on his master's grave until he too died and was buried close to his master. How's that for loyalty? 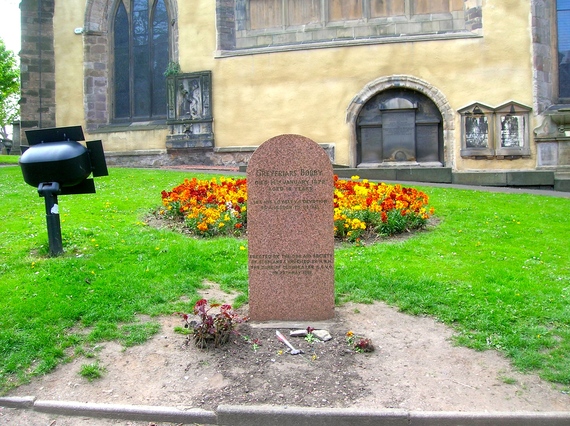 In 2006, Miguel Guzman died in Central Argentina, his German Shepherd named Captain ran away from home to his graveside where he has not left since. How's that for faithfulness?

How did these dogs know where their respective master's were buried?

Renowned conservationist Lawrence Anthony died on March 2, 2012. He dedicated his life to rescuing and rehabilitating elephants in Zululand bush, South Africa. Anthony was famous for his gift of calming these magnificent beasts when they were upset, earning the moniker "Elephant Whisperer."

Two distinct herds, which had not visited Anthony's home for at least a year and a half, walked singled filed for over 12 hours and arrived within less than a day of one another to say good-bye to the man they loved. Elephants are known to grieve and mourn their dead for many days.

At least twice in our short history (that I am aware of) honeybees have attended their beekeepers funerals. In 1934, when Sam Roger's died in Shropshire, England, his bees paid their farewell at his graveside funeral. They landed on a nearby tombstone and as soon as he was buried they departed.

When John Zepka of Berkshire Hills near Adams, Mass. died on April 27, 1956, thousands of his bees clustered inside the tent at the open grave site to pay their respect to the beekeeper who never wore any protective gear. As his coffin was lowered into the earth, the bees left the tent and returned to their hive on Zepka's farm.

How did the elephants and bees know their trusted and loyal human friend had perished and furthermore, where to go to mourn their loss? Their collective consciousness knew -- that's how.

Humans currently have dominion on Earth, but unless we agree to stop 'The War Against Nature' there will be no elephants, tigers, lions, rhinos, orangutans, polar and grizzly bears, bluefin tunas, seahorses, sharks, rays, dolphins or whales left. And as Chief Seattle of the Suqwamish and Duwamish so eloquently put it, "If all the animals were to vanish mankind would die from a great loneliness of spirit."

There's a nauseating sense of entitlement by certain inconsequential, male big-game hunting, billionaires and their offspring; that is Bob Parsons of GoDaddy and Donald Jr. and Eric Trump; and the nation of Japan - who on December 1, intend to launch its tenth consecutive campaign to slaughter whales in the Great Southern Ocean within an international whale sanctuary in contempt of the Australian court's ruling that whaling is illegal.

It's clearly time for 'The War Against Nature' to end because if all the animals die, we die!

This holiday season please give the ultimate gift - life - by supporting any or all of these worthy organizations: Sea Shepherd Australia - Operation Relentless, Peta, Humane Society, Orangutan Project, International Elephant Project and Wolf Song of Alaska.