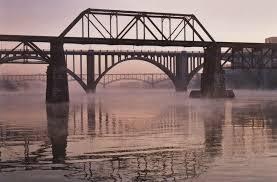 The war in Gaza roars on and a storm of words are bandied about, unfiltered and at times, even un-thought. Take these for example:

Those are the words of famed rocker, Eddie Vedder. Less a screed and more of an animal's grunt, they illustrate perfectly what I'm talking about. While there are innumerable emotions on every side of this issue, there is very little consideration for facts -- or civility.

In the past few weeks I've done my own share of opining -- I won't be doing only that here. Rather, I'm going to show you an example of bridge building, as of late, an activity in short supply. The following are excerpts from a discussion I had on Facebook with a total stranger, just a regular human being from the Midwest -- named Jim. Here's how he started the thread:

Peter, with all due respect, why are the Israeli's so upset about some ineffectual rockets? I hope you can enlighten me. Where are the Israeli Liberals? Or am I just too clueless? There have to be people on both sides that want to be good neighbors to each other; that want to coexist. If Canadians came into my neighborhood and fenced off a few blocks, and then called it Canada, I'd be pissed too. I recognize Israel, but I'm not sure that bombs and tanks are going to solve the problems there.

Jim, I wouldn't deign to call you "clueless" but since Israel's liberal wing is so highly visible and so well recognized -- I can only assume you're not that familiar with the situation. To use your metaphor: Let's say the states of Montana, Colorado, North Dakota and Nebraska came together to obliterate Canada -- just as the Arabs came to obliterate Israel in the 1967 war. In fact, after Abdel Nasser, president of Egypt at the time (of which the Gaza Strip was a part) expelled the UNEF peacekeeping force in Sinai and Gaza, he then closed off the Straits of Tiran -- a major sea route for Israeli shipping (itself an act of war) and then, with the combined armies of Syria, Jordan, and Iraq, he amassed his (Soviet trained and supplied) army with deadly force on Israel's borders. During those dark days before the war, the Egyptians and the Syrians terrorized Israeli citizens with daily radio broadcasts:

"Jews, we are coming to push you into the sea."

Back to your metaphor: Next in June of 1967 the "Canadians" successfully defended themselves against the attackers with a pre-emptive strike. At the end of that six-day conflict they found themselves in possession of huge pieces of their enemy's territory. In an amazing show of peaceful compromise, Canada aka (Israel) offered to give up nearly all of their aggressor's land back for peace. (Read up on: The Khartoum conference of 1967.) How would your friendly Canucks react if after their peace gesture, they were rebuffed, as Israel was, with the infamous three no's: No peace, no negotiations, and no recognition?

While there may well be people on both sides that want to be good neighbors, right now, Gaza is governed by a fascist, fanatical regime that has within it's very charter, a call for the destruction of the State Of Israel. The discovery of Hamas's diabolical tunnel system, designed to carry out a large scale Rosh Hashanah attack against Israeli citizens that would make the Mumbai terror attack of 2008 look like a BB-gun accident, along with its continuous rain of deadly missiles, makes a Kumbaya moment look very unlikely and frankly -- immoral at this time.

It's here that I suggest to Jim that we take the conversation off Facebook.

ME: Jim, I'm a peacemaker too, just like you. I'm not a militant in any way. I just feel I need to set the record straight.

JIM: I don't mean to diminish the significance of Israel's actions. I know you through your music and have respected and admired you for years. I just wish it all would stop. For everybody.

ME: Me too. Seriously. I feel scared.

JIM: Peter, this may be much more than you ever wanted to know about me but I've outlived two of my children and I will carry the grief of that with me always. So I suppose it is the sudden, unexpected loss of life that causes me to hate death and violence so damn much. There's an expectation of a long and happy life but I've seen it cut short without any sort of warning or time to prepare for it. There are so many empty holes in the life of a human being. It is grief and sadness that troubles me no matter where a person lives or what they believe. Keep doing what you do. Respect...

ME: Jim, I'm so sorry to hear about those inscrutable, inexpressible losses. No question your experience has given you a singular sensitivity. I've got a couple holes too, the gaping kind. Makes you crumble at times and at others -- makes you weep with awe for sheer mystery of it all. Jim, may you be blessed with the gift of the latter. Good to know you. Please stay connected.

JIM: I can't improve on that at all. It's what I'm feeling and it tells me a lot about your heart. Thank you for it. It can be difficult to suddenly feel everything. Your whole world changes when your heart opens up. It is good to know you too. Thank you for your words tonight. In the end, after the torrent of words, after the vitriol, and after the animalistic grunting has died down, it's the bridges that are important. There are far too many walls. Bridges are something only humans can build. When someone says in passing, "well, he's only human" know that to be human is not easy. It is in fact, our highest cause, the very thing to which we must aspire.