What if one day we encounter aliens, and they are our descendants?

Societies living off-Earth sounds like a concept from science fiction. We spend our lives pinned to the planet. In half a century of human space flight, fewer than 600 people have traveled to low Earth orbit, and just 12 have stood on the surface of another world. The cost and difficulty of extracting humans from gravity's grip seem to have put dreams of space travel on ice.

Yet that is likely to change. Entrepreneurs like Elon Musk and Jeff Bezos are developing reusable rockets that can ferry people more easily into orbit. Richard Branson is hoping to show that there is a viable economic model for space travel based on recreation and tourism. Hotelier Robert Bigelow wants to make sure you have somewhere to stay for your dream vacation in 10 years. Meanwhile, governments are ramping up their efforts to get explorers to the Moon and Mars. NASA aims to put astronauts on Mars by 2035, and the Chinese intend to have an orbiting space station and a lunar colony around the same time.

These plans are being fueled by technological innovation. New materials will allow rockets to be lighter, stronger and cheaper to launch. Parts will be fabricated by 3D printers on the International Space Station. The Moon and Mars are remote and forbidding but it's fairly easy to turn their soil into construction material and mine it for water to drink and oxygen to breathe.

"Astronauts' capillaries and cardiovascular systems would adjust, and muscle mass would be shed."

It may even be possible to build a space elevator on the Moon: a super-strong cable extending into the sky, suspended by its own weight and the Moon's spin, allowing materials to be ferried by elevators to zero gravity. A space elevator could spur new economic activity and further exploration of the solar system. Perhaps a brave crew will enter suspended animation and venture off in an interstellar ark to find a pristine habitable world.

Suppose this plays out in the next 50 years. We can imagine the first baby born off-Earth, a transition as profound as our leaving Africa 60,000 years ago. How will living off-Earth change us?

Several astronauts have spent more than a year in zero gravity, and they experienced muscle loss, brittle bones and difficulties with vision. A space station could be spun up to ameliorate these problems, and for colonists on the Moon and Mars, gravity would be reduced, not absent. Their capillaries and cardiovascular systems would adjust, and muscle mass would be shed.

Few of us would relish living in the isolation and close confines of a bubble habitat far from home. The lack of a varied natural environment is likely to lead to weaker immune systems. However, the colonists will innovate in the activities of exercise and sex. Their space suits will be made from materials that are supple, supportive and skin-tight, and we might envy their ability to effortlessly leap and cavort across the surfaces of their new worlds.

"In the radically different and controlled environment of space, speciation may happen much quicker than on Earth."

If early colonies are restocked with new recruits from Earth, physiological changes will be modest. But subsequent waves of colonists may sever the umbilical; they might be dissidents or motivated by utopian ideals. As they live and die off-Earth, their psychological landscape will be sculpted by their new environment. Biologically, they will evolve into a new offshoot from the human tree.

How long will this take, and what will they be like when they are no longer "us"?

The minimum size of a viable colony, one that avoids excessive genetic abnormality and inbreeding, is about 160. The colonists will be subject to two phenomena well known among small, isolated populations on Earth: the founder effect and genetic drift. A shrunken gene pool has the counter intuitive result of accelerating evolution. Evolution will also get a boost from the higher rate of mutations, since cosmic rays are not being stopped by a thick atmosphere. Smaller genetic variation comes with the downside of being less able to respond to new selective pressure. The colonists would be vulnerable to new pathogens that could wipe them out.

It's a good bet that they will take control of their own destiny. Technologies for engineering and "editing" DNA are maturing rapidly, so the colonists will optimize their genetic makeup, bypassing Darwin's mechanism of natural selection. Advanced medical technology and an optimized diet will ensure that almost everyone survives to old age, not just the fittest.

Off-Earth colonists might not be citizens of any country, so they could set their own legal and ethical regulations. It's likely they would aggressively adopt technologies for radical life enhancement or for replacing body parts with mechanical equivalents. The merger of man and machine is dystopian to many, but the adoption of cyborg technologies will give the colonists the power to transcend their physical limitations. This in turn would expand the range of "habitable" off-Earth environments for colonization. A final frontier of this scenario could be the technology to upload a mind from a brain into a computer and remove all dependence on a physical body.

Certain populations in Australia and Papua New Guinea were isolated from Europeans for 30,000 years, but they had not evolved into new species. In the radically different and controlled environment of space, speciation may happen much quicker than on Earth.

Suppose some of the colonists return to visit Earth thousands of years and hundreds of generations from now. Their language is unintelligible, and their culture is unrecognizable. They are tall and spindly, with pallid skin, small teeth and no body hair. It will be unsettling for them and for us, like looking into an eerily distorted mirror.

PHOTO GALLERY
23 Badass Images Of The Apollo Astronauts
Download
Calling all HuffPost superfans!
Sign up for membership to become a founding member and help shape HuffPost's next chapter
Join HuffPost 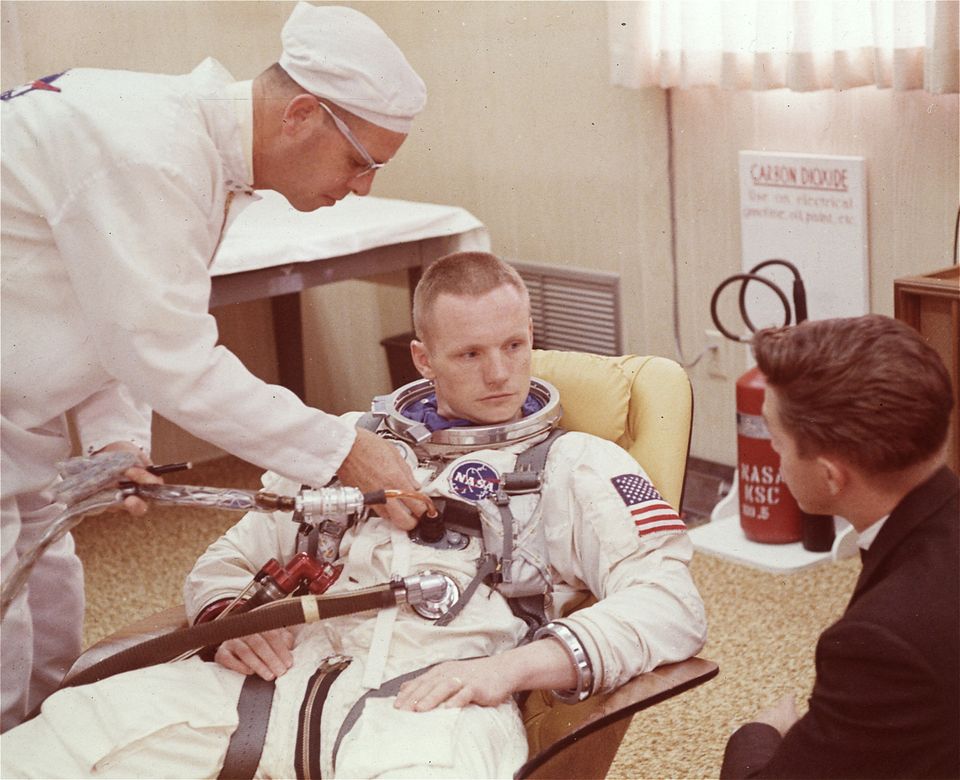 1 / 23
Neil Armstrong in 1966, three years before Apollo 11, in preparation for the Gemini 8 flight.
ASSOCIATED PRESS