I'm honored and humbled to have been invited to the White House when President Obama welcomes Pope Francis.

I'm still shocked that so many people are even interested in my visit.

Why? Aren't there other gay Catholics?
I know there are, but I don't hear many gay Catholics speak up and say, "I'm gay. I'm Catholic. I'm not chaste."

Now, I may have not said those exact words, but my blog, The Gay Catholic, does explain how I try to reconcile my faith and my relationship with God as an openly gay man.

A Miracle from Pennsylvania Avenue.
When I heard about the Pope visiting the White House, I contacted the White House website saying how awesome it would be to attend his welcoming. Within two weeks, I received a phone call from a corespondent who extended an invitation. 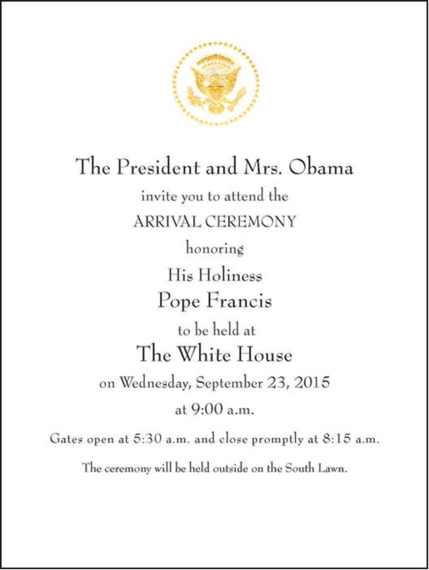 The why behind it all.
Religion and politics aside, wouldn't anyone want to be present at the White House when the President of the United States welcomes the Pope, especially in 2015?

I mean, SCOTUS legalized gay marriage in the United States this year and we have a Pope who speaks of compassion, love and less judgement of the LGBT community.

The two governing bodies I love and believe in are coming together. Both of which have expressed acceptance and support of the LGBT community. That's why I want to be there at the White House.

Pope Francis' impact on me.
When I heard Pope Francis say, "If a gay person wants to seek God, who am I to judge?", I realized I wanted to go back to the Catholic church. I realized how much I missed attending mass, receiving the sacraments and feeling welcome in the Church.

For me, hearing Pope Francis' loving words was a sign. A sign that I'm heading in the right direction in my life. I'm grateful to Pope Francis for welcoming me back and I can't wait to be there to welcome him to the United States.

Many have asked if I will be meeting Pope Francis ... I don't think I will be meeting him. Though, it would be wonderful to hug him and thank him for inspiring me to return to the Church, but I know he has more important people with whom to speak.

This is my personal journey.
While this public interest is fun, I have to remember this is all part of my personal journey. I do not speak with any authority, I am not a moral theologian and I'm not a politician. I started my blog for myself and hoping it may help other gay Catholics with similar struggles. I don't speak for all gay Catholics and I don't speak for the LGBT community.

I'm humbled by all of this, but I am just a young Catholic gay man trying to sort out my faith.