Some 40 million years ago, they began exploiting a mutually beneficial exchange that bees and flowers had developed 130 million years before: a trade of pollination for nectar. Hummingbirds, in effect, wanted to get in on the act. In so doing, they overhauled their avian body plan, altering flowering plant evolution along the way.

Recent studies with high-speed photography have afforded new insights into hummingbird physiology and function. We now have a fuller understanding of these birds, with their small body size (as light as 2g, or less than a penny), rapid heartbeat (1,200+ per minute) and the highest body temperatures and metabolism (12 times higher than pigeons') among vertebrates. 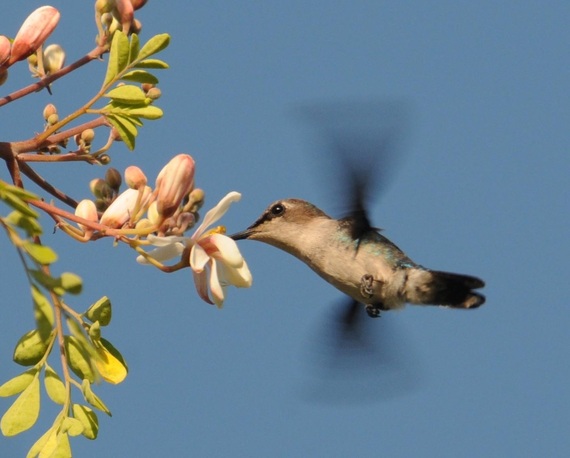 An immature male Bee Hummingbird in Cuba during hovering flight. This is the smallest of birds (just two inches long), and has the most rapid wingbeat (up to 80 beats per second). This image shows the blur of the highly supinated "wrist" of the wings flipping back and forth with power strokes in each direction. Even with a shutter speed of 1/500th of a second, the wings are a blur, but the head is steady as it gains nectar from the flower. Photo credit: Steve Zack.

They are part of a package deal to help hummingbirds consume their weight in nectar each day. The main evolutionary challenge was to hover with stability near flowers so as to probe the flower's petals and gain the nectar reward.

To do so, hummingbirds developed the capacity for sustained hovering by creating power strokes on both the downstroke and the backstroke of wing action. All other birds (except penguins "flying" underwater) have only the downstroke as a powerstroke, with the return stroke simply for recovery. This allows hummingbirds the aerial stability to finely probe flowers for nectar, even in unstable wind conditions.

Hummingbirds have a relatively short humerus (upper arm bone connecting the elbow to the shoulder) and a highly supinated "wrist" in the wing to support a motion like a sideways "8". By inverting their wrist, hummingbirds create a reverse airfoil during the powered backstroke. This novel design allows for sustained hovering, flying backwards and sideways, in addition to forward flight. 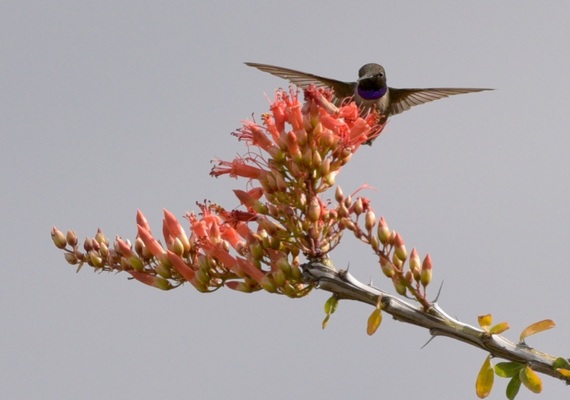 To gather nectar, hummingbirds have a complex tongue that acts as a liquid gathering structure. The tongue changes shape dynamically when inserted deep into a flower. Numerous small lamellae (folds) on the tongue unfurl in 1/20th of a second when in contact with the nectar. As the tongue withdraws, the lamellae fold back inward to trap the nectar.

So effective was the hummingbird's evolution in joining (and competing with) bees, moths, and bats in pollinating flowers that several separate lineages of flowers evolved to accommodate hummingbirds specifically by changing their flower shapes.

Hummingbirds typically seek flowers in the red spectrum (which bees cannot see) that are bilaterally symmetric and produce copious dilute nectar down below pollen-holding stamens. As a hummingbird probes for nectar, the flower deposits pollen onto - and receives it from - the bird's head or beak.

In the New World tropics, many single flower species evolved to be pollinated only by a specific hummingbird species. One of the best studied is a high-elevation passion flower in South America's Andes, with nectar tubes that are 6-14 cm long. The Sword-billed Hummingbird, with the longest beak of all hummers at 11 cm long, has co-evolved with this flower over 10 million years for a species-specific pollination system.

The adaptation has helped the hummingbird to survive in a difficult environment. Of the 328 species of hummingbirds, all in the New World, some 14 percent are considered at risk -- with most problems for species in southern Mexico and the tropical Andes. Montane habitat loss is the principal culprit. 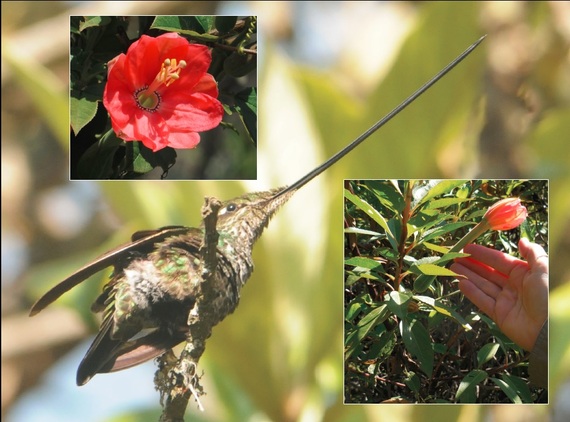 A photo collage of a Sword-billed Hummingbird in the Andes of Ecuador and the co-evolved passion flower it uniquely pollinates. Above is the open flower with the reproductive parts exposed to put and receive pollen on and from the head of the hummingbird during feeding visits. Below the deep corolla depth is shown. Photo credit: Steve Zack.

Hummingbirds need protein, too, of course, particularly for reproduction. They prey on small insects and have developed a specialized mechanism in which the lower beak's outer half is actively flexed downward, storing elastic energy that powers a snap closure of the mouth in less than a hundredth of a second. Goodbye, insect.

So important is the flight performance of hummingbirds that it has led to strong sexual selection among males in flight displays. Hummingbirds are polygynous (a male may attract many females, and females alone incubate the eggs and rear the young). But displaying hummingbirds, like the Rufous Hummingbird in western North America and the Ruby-throated in the east, perform species-distinctive "dive displays."

They ascend up to 40 meters, then dive at speeds as high as 55 mph, spreading their tail feathers at peak velocity. Different species have different irregularly-shaped tail feathers that exhibit "aeroelastic flutter" at the end of the dive and produce distinctive sounds like that created by vibrating violin strings. Aeroelastic flutter is dreaded by flight engineers, but for hummingbird males it's a necessary part of attracting females.

Finally, hummingbirds are copycats in other ways. Several species, like the Anna's Hummingbird familiar to those with hummingbird feeders on the West coast, are capable of vocal learning. They learn and use the "syllables" and song rhythms of neighboring males (they are one of only three bird groups, along with parrots and songbirds, to exhibit such vocal learning). 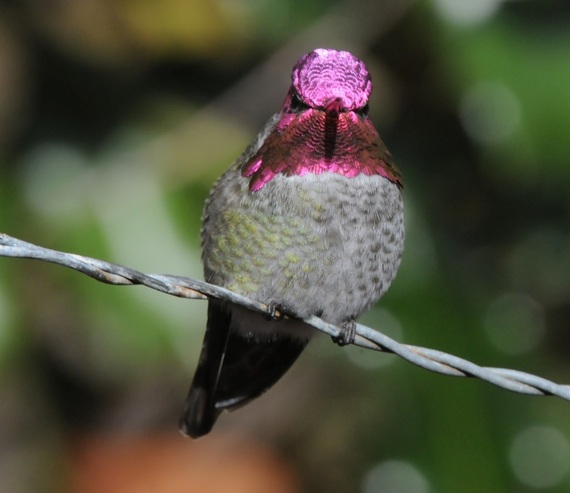 A male Anna's Hummingbird showing its striking iridescence. Anna's are among the hummingbirds known to exhibit vocal mimicry, as they copy song phrases and rhythms from their neighbors. Photo credit: Steve Zack

High speed photography tells us that rapid wing beats (up to 80 per second!) give these unique avian creatures the hum for which they are named. But the hum just touches the surface of what these amazing birds can do: from their unique hovering ability, to their highly evolved feeding mechanism, to the right stuff to impress mates aerodynamically. I can't help thinking we could learn so much more - if only they would slow down.

Steve Zack is a Senior Conservation Fellow with WCS (Wildlife Conservation Society). He worked for WCS for 16 years on a diversity of issues involving bird conservation worldwide. Steve earned his B.S. from Oregon State University in 1978 and his Ph.D. from the University of New Mexico in 1985. He taught at Yale University from 1989 to 1993. Follow Steve on Twitter at: @szackwildlife.