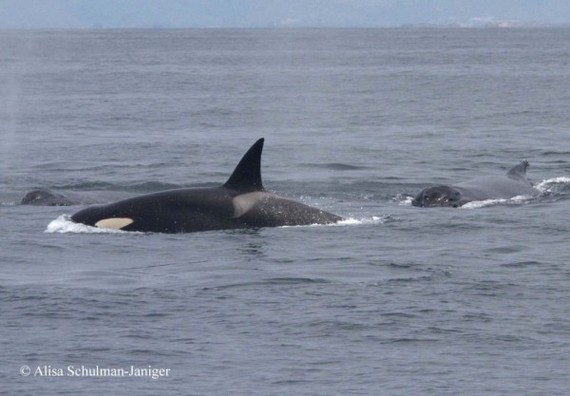 How does a 45 ton whale manage to rescue a 300 pound seal? Or drive off a pack of hungry orcas in an attempt to save a baby of a different species?

The following two incidents reveal how humpback whales did both of those things, adding a whole new meaning to the phrase "gentle giants'.

Monterey, California - In what is probably the first time such an event has been witnessed and recorded, humpback whales appeared to try to intervene when a pod of killer whales attacked a baby gray whale.

Skilled at killing even large whales, this type of orcas regularly take the calves of gray whales - hard as it is to witness, this is a normal predator/prey relationship. But what occurred on May 3rd, 2012 in full view of whale watchers was nothing short of remarkable. 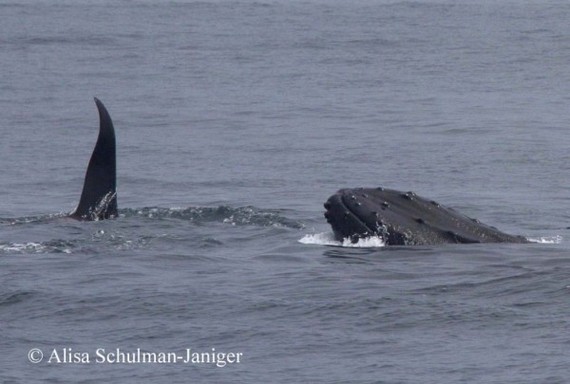 Killer Whale and Humpback Whale: a humpback whale (right) lifts its head out of the water and trumpets loudly toward a male killer whale (left), who is passing just a few feet away. © Alisa Schulman-Janiger/Monterey Bay Whale Watch

Through the hazy overcast skies, the Monterey Bay Whale Watch boat captain John Mayer on the SeaWolf ll, spotted the whales in the distance and knew something unusual was going on. As the boat drew closer to the scene, whale watchers were stunned by what they saw. A pod of approximately nine transient orcas was in the process of trying to separate a new calf from its mother, but what amazed even the seasoned captain and crew was the presence of two large humpback whales which may have been trying to intervene. 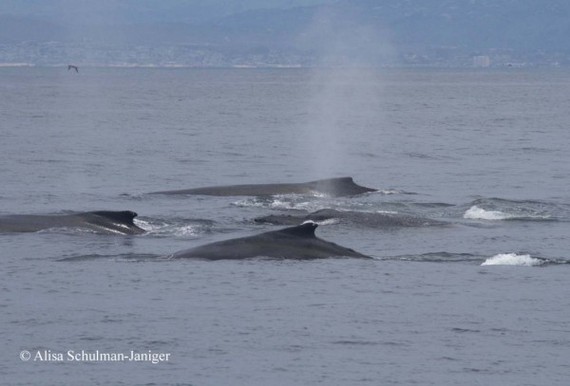 Two humpbacks were present throughout the attack, and were joined shortly after the attack ended by five more. © Alisa Schulman-Janiger/Monterey Bay Whale Watch

The mother gray whale struggled valiantly to save her calf, lifting it out of the water to breathe, but she was no match for the coordinated attack as the orcas repeatedly grabbed the fatigued calf and flipped it upside down to prevent it from breathing. During the half hour that the first group of whale watchers observed the contest for survival, the two humpbacks splashed, 'trumpeted', and moved in as close as a body length from the grey whale mother and her calf.

At this point, whale researchers Alisa Schulman-Janiger and Nancy Black arrived on the scene in Monterey Bay Whale Watch boat Pt. Sur Clipper, and continued to observe the unusual encounter for nearly seven hours. Shortly after their arrival the baby whale was killed, and the mother took temporary refuge by their boat before heading towards shore.

Schulman-Janiger said that first two, then three more humpbacks joined the original pair, and the seven humpbacks "repeatedly followed the orcas, trumpet blowing, tail slashing, rolling, and head raising. They kept returning to the area of the carcass where the orcas were ripping into the blubber of the dead calf". 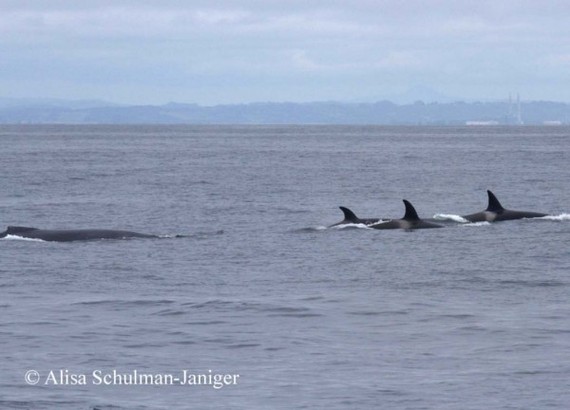 A humpback whale follows a subgroup of orcas. This was the most common orientation seen: humpbacks following the orcas (rather than the reverse), sometimes at increased speeds. © Alisa Schulman-Janiger/Monterey Bay Whale Watch

Researcher Nancy Black speculated that these humpback whales may have been protecting the carcass, making it more difficult for the orcas to feed, but without underwater cameras it is difficult to be certain.

"What we do know", said Schulman-Janiger, "is that these humpback whales seemed EXTREMELY distressed: nearly every surfacing over the entire observation period was accompanied by trumpet blows. They even put themselves into potential harm's way by diving right next to the gray whale mom - where her calf was under attack".

She noted that humpback whales were known to rescue seals from orcas in the Antarctic, as documented by scientist Robert L. Pitman and John W. Durban referenced the an article in Natural History Magazine: 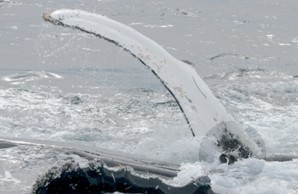 The killer whales moved on, and fifteen minutes later they spotted a crabeater seal on an ice floe. They created a wave that broke up the floe and left the distraught seal on a piece of ice not much bigger than it was. Just when it seemed the killers were about to have their way, the same pair of humpbacks charged in, swimming around the floe, bellowing and thrashing the water. The killer whales seemed annoyed and finally left the seal alone, still safe on the floe. We concluded that perhaps this deliberate intrusion by the humpbacks was some jumbo-size form of mobbing behavior, comparable to the way songbirds pester birds of prey to drive them off.

A week later we witnessed a similar event that suggested a somewhat different interpretation. Another group of killer whales was attacking a Weddell seal on an ice floe, and a different pair of large humpbacks had inserted themselves into the fray. At one point, the predators succeeded in washing the seal off the floe. Exposed to lethal attack in the open water, the seal swam frantically toward the humpbacks, seeming to seek shelter, perhaps not even aware that they were living animals. (We have known fur seals in the North Pacific to use our vessel as a refuge against attacking killer whales.)

Just as the seal got to the closest humpback, the huge animal rolled over on its back--and the 400-pound seal was swept up onto the humpback's chest between its massive flippers. Then, as the killer whales moved in closer, the humpback arched its chest, lifting the seal out of the water. The water rushing off that safe platform started to wash the seal back into the sea, but then the humpback gave the seal a gentle nudge with its flipper, back to the middle of its chest [see photograph]. Moments later the seal scrambled off and swam to the safety of a nearby ice floe.

It occurred to us that in all three of these encounters, the menacing behavior of the killer whales may have triggered a protective maternal response in the humpback whales. Even though they did not have calves that were at risk, they acted immediately and instinctively to counter the threat posed to a smaller animal. Save the Seal

Dr. Lori Marino, senior lecturer in neuroscience at Emory University in Atlanta, is a renowned expert in the cognitive ability of whales and dolphins and she shared her opinion of these remarkable events:

This is apparently a case of humpback whales trying to help a member of another species. This shows that they are capable of tremendous behavioral flexibility, giving even more credence to reports of cetaceans coming to the aid of human beings. They seem to have the capacity to generalize from one situation to another and from one kind of being to another. Moreover, they seem to sympathize with members of other species and have the motivation to help.

One reason may be that humpback whales, and many other cetaceans, have specialized cells in their brains called Von Economo neurons ("spindle cells") and these are shared with humans, great apes, and elephants. The exact function of these elongated neurons is still unknown but they are found in exactly the same locations in all mammal brains for the species that have them.

What is intriguing is that these parts of the mammal brain are thought to be responsible for social organization, empathy, speech, intuition about the feelings of others, and rapid "gut" reactions. So the presence of these cells is neurological support for the idea that cetaceans are capable of empathy and higher-order thinking and feeling.

In either case these whales are apparently demonstrating a high level of sensitivity and concern (morality, if you will) that is laudable in any species.