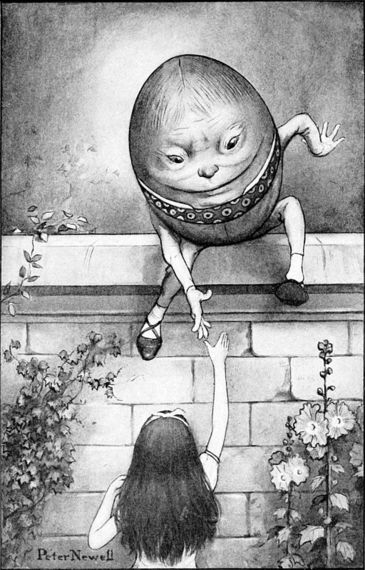 A shocking report was released revealing that Humpty Dumpty could have been put back together if not for the incompetence of Veterans' Affairs.

The report described Mr. Dumpty as a tough, hardboiled individual capable of a full recovery from the shell-shock he sustained after the fall. "If all the king's horses and all the king's men had immediately whisked Mr. Dumpty off to intensive care, if he were not made to wait six weeks for treatment due to bureaucratic red tape, he most likely would have survived."

Knowing Mr. Dumpty's demise would expose cracks in the system, Veterans' Affairs then scrambled to manipulate data to cover up their failures and duck responsibility.

Blogger's note: Our veterans are still not receiving timely and adequate health care. If you believe they should be served as they have served us, please tell your U.S. representative.

Image: "And He Grinned Almost From Ear to Ear," Illustration by Peter Newell (1862-1924), chapter "Humpty Dumpty," Through the Looking-Glass and What Alice Found There (1902), by Lewis Carroll. Public domain via Wikimedia Commons.