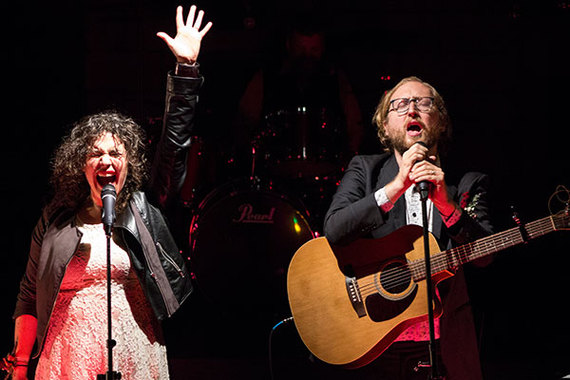 Don't you just hate it when people tell you about this "weird dream" they had? Doesn't it make you want to jump out a window?

How about when someone simply has to tell you about how they fell in love? Isn't that the most boring, irritating thing you can think of?

Not when the people are Shaun and Abigail Bengson, the endearingly talented couple at the head of a "family band" called, you guessed it, the Bengsons. Hundred Days, at the Public Theater's Under the Radar Festival, is the story of how Shaun and Abigail met, fell instantly in love, and married three weeks later. The shadow of mortality, embodied in Abigail's forbidding recurring dream, drives the sometimes chilling, often thrilling, and quite slender, narrative.

If you are the kind of person (like me) who ponders all the ways that good fortune (getting a new job, winning the lottery, falling in love) can go horribly wrong (failing at the new job, never knowing if people like you for yourself or your newfound riches, losing the person you love most in the world), then this is the show for you.

Because as soon as Abigail falls madly in love with Shaun, and immediately moves into his apartment, she is reminded of her prophetic dream, in which the object of her love has only one hundred days to live. And together, the newlyweds begin to attempt to squeeze a lifetime together into a mere one hundred days.

The music is a rich, often boot-stomping folk-rock Lumineers-ish, Mumford-esque hybrid. Abigail wears the boots and does plenty of stomping. She's also the more expressive, more richly-voiced part of the couple. She telegraphs her joy and her pain in every expression, and her eyes alone tell much of the story, along with her whooping and swooping vocals.

Shaun is the more recessive half of the pair, but his sweet calm gives his wife more room to shine. And the twosome are lovingly assisted by a quartet of singers and musicians: Colette Alexander, Geneva Harrison, Reggie D. White, and the glowing Jo Lampert. Along with their collaborators Anne Kauffman and playwright Sarah Gancher, the Bengsons have crafted a story of love and mortality that can break your heart at the same time it's making you want to get up and dance.

The story doesn't always add up, and sometimes you may roll your eyes at their naïve youthful passion and perplexity, but the big, beautiful music always lifts you past any doubts. Is it a musical? A concert? Who knows! And who cares, it's gorgeous and it's moving and it's a pleasure to be part of.

Dance as Social Commentary at the Joyce

Art Break: Where to go this week on your lunch break