While Republican frontrunners Mitt Romney and New Gingrich made campaign stops in Miami Wednesday, hundreds of people marched in solidarity with predominantly Haitian and Cuban workers from Miami's financial district to demand better pay and benefits.

Activists from community groups to religious leaders to Service Employees International Union members joined the March For Inequality, walking from Greater Bethel AME Church in Overtown through the shadow of Freedom Tower, where Romney was meeting with supporters, to a rally at the Southeast Financial Center.

Outside a Wells Fargo bank, they demonstrated to demand attention to the "ever-growing gap in wealth in this country," according to a statement from participating group 1Miami.

"We believe that hardworking men and women have a right to put food on the table, have access to adequate health care and give their children the opportunity to have better lives by making a good living wage," said Jose Suarez, communications director for 1Miami, in an e-mail.

"Miami, as well as the country, should not allow and cannot afford to have workers whose jobs are pushing them towards poverty while corporations and banks like Wells Fargo are making billions without paying their fair share in taxes," he wrote.

According to the SEIU, local office cleaners earn as much as $4 an hour less than their counterparts other large metro areas -- while a "typical" office clerk earns as much as $9,000 less.

Former security guard Rosabla Campos said it was time to hold government and "large greedy corporations" accountable: "After my hours were cut, I was spending more money getting to work than I was making," she said in a statement. "How’s someone supposed to get by with jobs like these?"

Suarez said the scheduling with regard to Romney and Gingrich was a coincidence, but a convenient one: "Their visits to Miami on the same day as this march help highlight the deep differences of their favor-the-few philosophies versus our commitment to build a solid, stable middle class here in South Florida."

View images and video from the march: 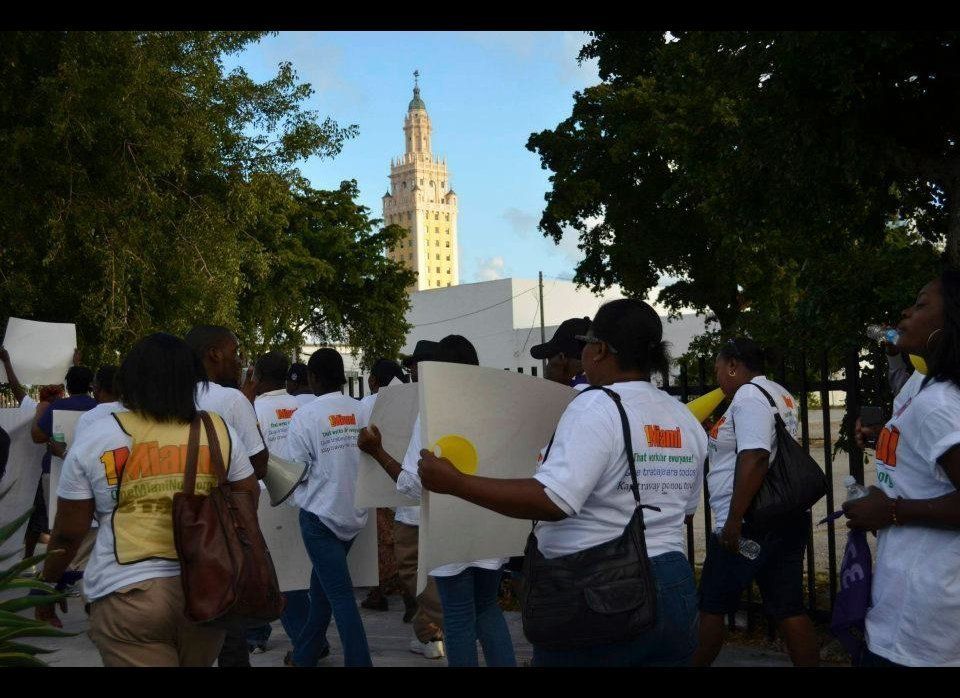