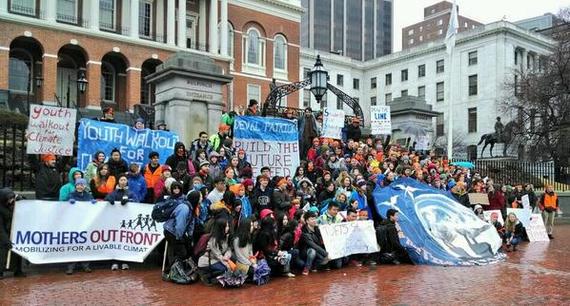 On Monday, several hundred students and adults walked out of class and work to call for climate leadership from Governor Deval Patrick. The action was organized primarily by youth-led group Students for a Just and Stable Future, building on the Better Future Project's Climate Legacy Campaign pushing the Governor to act on climate in his final year in office.

Braving freezing rain and snow, protesters rallied in front of the MA State House to support the governor's work on climate issues so far and call for a ban on building new fossil fuel infrastructure in the state.

During the walkout and rally, Governor Patrick agreed to meet with the students who organized the walkout. The parties will sit down in coming weeks to discuss the future of clean energy in Massachusetts.

Massachusetts' Global Warming Solutions Act of 2008 gives Governor Patrick authority to act without going through the Legislature. By taking bold action he can continue his strong history of climate action and stand up for climate justice, innovation, and jobs, making Massachusetts the standard of progressive leadership in the United States.

Noga Heyman, a student who traveled from Hampshire College to participate in the walkout, explains:

"America has looked to Massachusetts to lead the way on the most crucial issues in our nation's history. It's time for us to lead again on climate change, and our actions will have repercussions around the globe," said recent Harvard graduate Collin Rees.

A responsible and just transition to replace fossil fuel infrastructure with renewables isn't just a moral necessity -- it's also a prudent economic strategy. Led by Governor Patrick, Massachusetts has already established itself as a leader in sustainability, making important strides in energy efficiency, renewable energy, and more sustainable transport. These economic benefits have already delivered, with more than 80,000 green jobs developed in Massachusetts and a staggering 11% growth rate in green jobs per year since 2011.

The Global Warming Solutions Act stipulates that Massachusetts must develop a clear path toward emissions reductions targets for 2030. A ban on creating new fossil fuel infrastructure would go a long way toward making those targets equitable and ambitious.

Strong action on climate is a shrewd political decision as well, particularly in Massachusetts. A recent poll highlighted by MSNBC confirmed that young people overwhelmingly vote for politicians who will lead on climate, and that 73% of youth would actively vote against those obstructing progress.

Will Deval Patrick cement his legacy as a climate champion and earn the vocal support of the youth vote in the process?

As a rising star among Democrats and a leader who has already promised meaningful climate action, Governor Patrick is paying careful attention to the climate advocates of Massachusetts. The result of their upcoming meeting is yet to be determined, but one thing is certain: With his future political plans, all eyes will be on Governor Patrick when he meets with the student organizers of today's rally in the coming weeks.