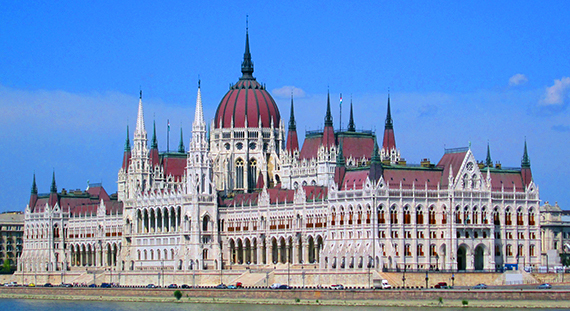 The Parliament Building in Budapest is one of Hungary's iconic sights. Photo by Stephen Winick, 2014.

It's no coincidence that most of the best-known Hungarian composers loved folk music; the country has unusually rich and deep folk traditions, and many modern Hungarians are fully aware of the treasures of their heritage. Hungarian folk music exists not only as a separate festival circuit and scene, but also as a healthy component of other popular styles. On my trip to Hungary back in June, I picked up some good examples. 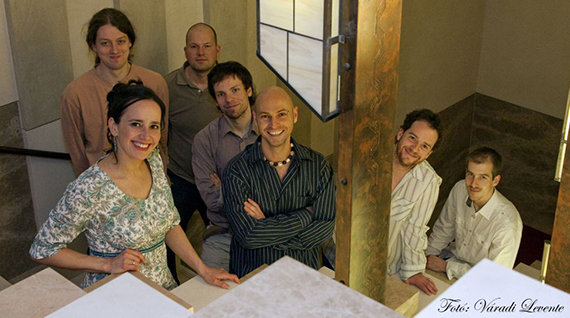 Bognár Szilivia (Hungarians put their surnames first) is one of Hungary's best-known folksingers, and has appeared in all sorts of contexts, from the techno sounds of Anima Sound System to the classical and early music of Sator quartet. She's definitely a world-class vocalist, who as Ken Hunt once cheerily remarked, "belongs to that select pantheon of singers everyone should strive to listen to before the Grim Reaper scythes each and every one of us down." Her new band is called etNoé, a name that captures the idea of cultural interconnectedness through a play on the words "ethno" and "Noah" (the legendary ancestor of all people). From the cover of Bognár Szilivia és az etNoé I had expected another reliably excellent, mostly acoustic folk album (of which she has several), but in fact this review would have fit in my last article on "electric folk." In fact, as the album goes on it gets more jazz and prog-rock oriented, at times sounding like Steely Dan or Pat Metheny (whose mentor was a Hungarian guitarist, Attila Zoller). It's a beautiful and surprising work, on which each song sounds fresh and draws on different influences, without losing the thread that makes it cohesive. The opening riff of "Ileana" would sound comfortable on an Irish album, but the oud playing and the characteristically eastern mode of the tune might remind you more of Morocco, while the tasteful use of electronics and a bass-and-drums rhythm section adds the right touch of pop. The album's closer, "Addig élek," has a funky rock groove, guitar solos alternately jazzy and hard-hitting, and whimsical, almost-hidden touches in the phrasing and vocal harmonies that keep it fresh start to finish. Bognár's version of "Szerelem" (which is probably the most famous Hungarian folksong of all, due to Sebestyén Márta's performance in The English Patient) is grounded in ostinato prog-rock riffs, with touches of Indian veena, ethnic flutes, and hand drums. It's all tied together by brilliant arranging and producing by the bass player, Kovács Zoltán, and of course by Bognár's weightless voice, which radiates a confident elegance that makes the simple sound sublime. Hear "Ileana" below:

If you're not familiar with Bognár, you might want to explore her earlier recordings. A good place to begin would be Szájról Szájra, an album she recorded a few years ago with fellow singing stars Herczku Ágnes and Szalóki Ági. This is an all-acoustic affair, but it's energetic and appealing in every way, cleanly produced and expertly performed. The three young women sing solo and in different harmony traditions (including a song in which they intentionally imitate a bagpipe), and the diverse and layered arrangements show influences from jazz, Celtic, classical, and Hungarian folk music; from Balkan choirs and dances; from Flamenco; and from European groups like Värttinä. Backing musicians include Kovács (who may be behind some of the arrangements and production, which is uncredited), Nikola Parov (a Bulgarian flute, bouzouki, and bagpipe player who has performed Celtic music in projects like East Wind and Riverdance), and accomplished guitarist Juhász Gábor. For me, the best songs here are sad-sounding contemplative pieces such as "Sem esö" and "Tüzugrás," but there are some great high-energy pieces as well. As an added bonus, full lyrics are included, with English translations, in a beautifully designed booklet, making it a good starting place for Hungarian folksongs in general. Here's a live version of "Tüzugrás":

Hailing from Miskolc, the second-largest metropolitan area in Hungary, and the hub of the industrial north, Holdviola began as an electronica project in the mind of Farkas Péter. His original concept, to create a virtual band surrounded by theatrical media, soon gave way to the idea of a trio, performing traditional Hungarian songs with elements of rock and pop music, but also of traditional dance and modern theater. Enlisting his friends Barta Zsofí (voice) and Gál Lajos (guitars), he created Holdviola in 2008. He lists among his influences various post-punk and synth-pop bands, along with classical composers Rachmaninoff, Chopin, and Bartok. To date, the group has three albums, one of them live. Their first, Madárka (Little Bird), presents a series of traditional songs with guitar chords, keyboard loops and drums as the main accompaniment. My favorite song here is "E Ketermben," which reminds me of the New Wave bands of the 80s, but also of later keyboard rock bands like Coldplay, and which features a nice riff whistled by one of the band. I also like the title track, an atmospheric folksong that also appears on the etNoé album. The most successful songs from Madárka, "Bánat Utca," was released as their first single. It's a danceworthy piece that reminds me of Depeche Mode, with wistful-sounding verses about avoiding the street where an ex-lover lives, and a sunny chorus about getting over the breakup. Another standout, "Erdö, erdö," uses keyboard sounds at once gentler and more industrial, and an electric guitar processed to sound nicely organic. It was made into their first video, which you can see here:

Holdviola's second album is Vándorfecske (Wandering Swallow). It's a step forward in many ways, especially in the accompaniments and arrangements. In addition to the trio, they include guest musicians who add zither, bouzouki, kaval (a folk flute), gayda (bagpipe), and other instruments. In addition, they up their game on the electronics, coming up with unusual, inviting soundscapes. "Repulj madar" and "Mikor lesz már nyár" sound like an updated New Order; on the latter, some quite pretty electronics, another cheery whistling riff, and the subtle addition of bagpipe sounds all contribute to a great, uplifting track. The standout folk melodies on the album are "Ha Te Tudnád" and "Én az éjjel nem aludtam egy órát"; both were well known already on the folk scene, and for both they imported vocalists better versed in traditional singing. On "Ha Te Tudnád" they brought in Herczku Ágnes, one of Bognár's buddies from Szájról Szájra; she swaps verses with Barta for an engaging contrast in vocal styles, while in the arrangement, swirling bagpipes and flutes are backed by guitars, electronics, and propulsive beats. "Én az éjjel nem aludtam egy órát" is a song the great Sebestyén Márta used to sing with Muszikás, and to lead it Holdviola brought in Szabó Enikö, whose voice has a pleasing bite; the arrangement uses simple guitar echo ostinati, modal keyboard bridges, and mournful male backing vocals to create a subdued but comfortable atmosphere. This album defines what the band means by "electro-folk." It's one of the most successful blends I know of traditional music and electronic sounds, and deserves to be a classic of "electric folk" as well. 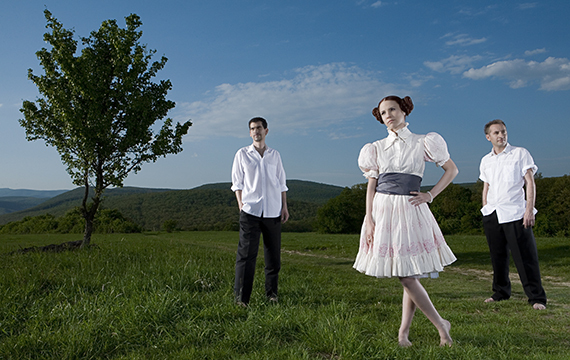 After Vándorfecske, Holdviola released Vándorfecske (Lemezbemutató Koncert), a live concert CD and DVD that features almost all the songs from both original releases. The CD features two songs that didn't make the DVD. On the other hand, the DVD shows Farkas's vision to its fullest effect. It includes dancers in both folk and contemporary costumes, guest musicians and singers, costume changes for Barta and the band featuring spectacular Hungarian textiles, and even animated special effects. It's definitely a fun concert to watch, and I'd recommend it. Although downloading is certainly the easiest way to get hold of these Hungarian releases, I'd snag the DVD if you can. Here's a video put together out of footage from the concert: