BUDAPEST -- Since the beginning of 2015, the global refugee crisis started to have a dramatic effect on Hungary. The migration route through the Balkans to Europe became more popular because of the many shipwrecks in the Mediterranean, while the protracted conflicts in Syria, Afghanistan and Iraq and the civil war in Libya led to a staggering increase in the amount of people who are seeking protection in the European Union. Because of Hungary's geographic position at the periphery of the Union's Schengen Zone, an area supposedly devoid of border controls, it has seen about 80,000 new arrivals this year.

The surge in immigration coincided with a decline in the popularity of the ruling nationalist-conservative party, Fidesz, due mostly to escalating poverty and corruption scandals. Fidesz' current position in the political landscape is an important determinant for Hungary's immigration policy. Since the far-right nationalist party Jobbik has emerged as its single most unified opposition, the political climate has progressively gotten harsher. Not only does Jobbik function as a benchmark for Fidesz -- it also controls several municipalities across the country. This has resulted in tacit support for affiliated violent far-right groups in self-appointed roles as guardians of the Hungarian nation, which currently means that they are allowed to monitor the border to catch refugees.

During its first term, Fidesz had a supermajority in parliament. As a result, it could singlehandedly amend the constitution. The changes Fidesz made guarantee its firm grip on all the pillars of government, plus institutions like the press and central bank, despite having lost voters in the 2014 parliamentary elections. While Fidesz' first term saw a turn to autocracy, its second is characterized by the creation of an underclass in Hungarian society and the establishment of an "illiberal" democracy in which personal freedoms come second to what the government considers the national interest.

The steady criminalization of poverty manifests itself in no-go zones for homeless people -- a brutal public work program that blatantly distorts unemployment statistics and forced evictions of Roma settlements. Hungary's immigration policies are perfectly in line with the general scapegoating of oppressed groups in order to "keep Hungary Hungarian." 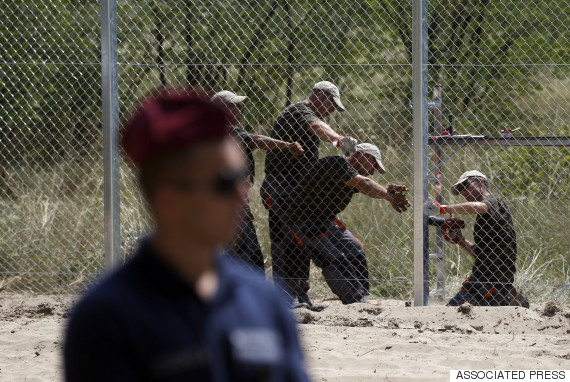 Fidesz leader Viktor Orbán unabatedly bases his campaigns on a fierce anti-EU rhetoric. It is therefore unsurprising that, for his party, the "permissive" immigration policies of the EU are the root cause of the problem. After the Charlie Hebdo attacks in Paris, Orbán started diverting the electorate's attention from internal politics to immigration by holding a "national consultation on terrorism and immigration."

The sham questionnaire -- with the goal of gaining legitimacy for exclusionary politics -- was heavily criticized by the rest of the EU and by Hungarian social scientists. It cost double the amount that Hungary spends on refugee protection per year. But this did not stop the government from following up with an even more expensive billboard campaign that features slogans like "If you come to Hungary, you cannot take the jobs of Hungarians," a campaign reminiscent of the racist van in the U.K.

Fidesz is predisposed to floating radical ideas and turning them into policy if they don't meet resistance. After visiting Hungary's biggest refugee camp in Debrecen, Orbán promptly announced that the government was considering shutting it down. This was met with little opposition, so an official announcement that all urban camps would be closed, with refugees moved to tent encampments in the suburbs and on the Hungarian pusta -- "so that local people would not be disturbed by the masses of refugees" -- followed only a few weeks later.

"Orbán's national consultation on terrorism and immigration cost double the amount that Hungary spends on refugee protection per year."

In late June, the foreign minister made a surprise announcement that Hungary would suspend its responsibilities under the Dublin Directive, which obliges the country of first entry into the EU to process asylum requests. The government backed down after fierce criticism, but this bluff did secure additional EU funds for Hungary's collapsing asylum system -- already almost exclusively financed by the European Refugee Fund -- and excused Hungary from participating in the EU's resettlement and relocation plans.

The vast majority of people who are apprehended at the Serbo-Hungarian border quickly leave, but this doesn't stop the Hungarian government from introducing one extreme measure after the other to prevent immigrants from "taking over." Recently, Fidesz officials announced plans to make illegal border crossing a criminal offense (rather than a misdemeanor) and to set up work camps for refugees. The asylum law has already been changed so that people can be deported back to non-EU countries with failing asylum systems. At the same time, the government is not making any attempts to provide adequate shelter, with existing refugee camps taking in double the capacity they were built for without getting extra support.

Given its history behind the Iron Curtain, Hungary should know better than to erect a fence on the Serbo-Hungarian border. It is expected to be completed by the end of November and will be three meters high and 175 kilometers long. The materials are being prepared by prisoners, while the actual building will be done by the Hungarian army. The fence itself is a truly Hungarian undertaking, but the ramifications are international.

"It is unlikely that this fence will be the last."

As we have seen elsewhere, trying to secure the country does not stem the flow of migrants: people have and will continue to move across borders. It will not solve the issue: the fence will direct refugees toward Romania and Croatia, and they will still make their way toward Western Europe from these countries.

The relation between Orbán and the EU is one of mutual dependence: Orbán is reconstructing and renovating half of his country with EU funds, while the EU needs Hungary as a buffer country to trap refugees on their way to the West. This careful balance is negotiated in the EU's response to the Hungarian immigration policy. If the EU were to acknowledge that the Hungarian asylum system is dysfunctional, which the European Court of Human Rights did with Greece in 2011, it would put another nail in the coffin of the Dublin Regulation. To do so now, the EU would have to radically change its policies in reaction to this unprecedented refugee crisis.

Considering that securitization is not just a Hungarian, but an EU-wide approach, this is unlikely to happen, and it is equally unlikely that this fence will be the last.