Not far from the camp at Roszke where thousands of migrants and refugees cross into the European Union every day, prisoners are working to complete a massive fence that is to seal Hungary off from Serbia by October.

More 170,000 people have crossed into Hungary since the beginning of the year, fleeing war, discrimination and poverty in the Middle East and Africa in the hope of finding refuge in the richest countries of the European Union.

Earlier this week, Hungary’s defense minister resigned because Prime Minister Viktor Orban was dissatisfied with progress that had been made in building the 175-km (110-mile) fence.

Five days before a new law comes into affect which will allow much stricter patrolling of Hungary’s southern border, the fence is nowhere near complete, with gangs of prisoners working to assemble the 3.5-metre barrier stretching eastward from the town of Roszke to the end of the Hungarian-Serbian frontier.

For now, migrants are easily able to crawl or climb over a much lower temporary barbed-wire fence that was itself laid down in double time after a government decision in July.

The government hopes the new fence will make all but impermeable a border that, until recently, had seemed set to fade away as Cold War tensions and the refugee streams that accompanied the 1990s Balkan wars receded further into history.

Along the border near Roszke, dozens of prisoners were working on building the new, more impenetrable barrier on Wednesday, watched over by prison guards.

A policeman supervising them told Reuters the prisoners were from the high-security Csillag prison in nearby Szeged.

Near them, hundreds of migrants milled around, some sitting in the shade beside the railway track as they debated whether to walk the final steps into the European Union and run the risk of being fingerprinted in Hungary and obliged to stay there.

Hungary is legally obliged to intercept and identify each entrant, but in practice large numbers have been able to continue on to Austria and Germany, with the tacit acceptance of all three governments.

EYEING EACH OTHER IN THE SUN

Prisoners, migrants, police and prison guards all eyed each other in the noonday sun on Wednesday. Some prisoners worked, while others chatted and rested.

Prisoners have been involved in building the fence since the beginning. The Hungarian prison service would not say whether their number had been increased since the decision to speed up construction.

On Thursday, Orban’s chief of staff, Janos Lazar, announced that the new fence could be completed by October, a month ahead of schedule.

“The number of prisoners working varies depending on the needs in the current phase of construction,” a prison service spokeswoman said.

Some 350 prisoners were working along the full length of the border, supervised by 65 prison guards, according to the prison service.

The spokeswoman said the prisoners, who had undergone thorough security checks, had volunteered for the work, for which they are paid 33,000 forints ($117) a month, minus a daily intermediary fee they must pay to the prison.

Prisoners in Hungarian are obliged to work if they are able. Most prisoners do this by growing their own food, or working in prison bakeries, farms and dairies. Others sew prison uniforms or manufacture beds and cell doors.

Very little apart from the ragged barbed wire fence shows where the border separating the two countries lies. The last section of railway track in Hungary is stamped with a sign saying it was made there, while the first bit of track in Serbia is unmarked.

Once the prisoners have finished their work, nobody will be in any doubt where Hungary ends and Serbia starts. 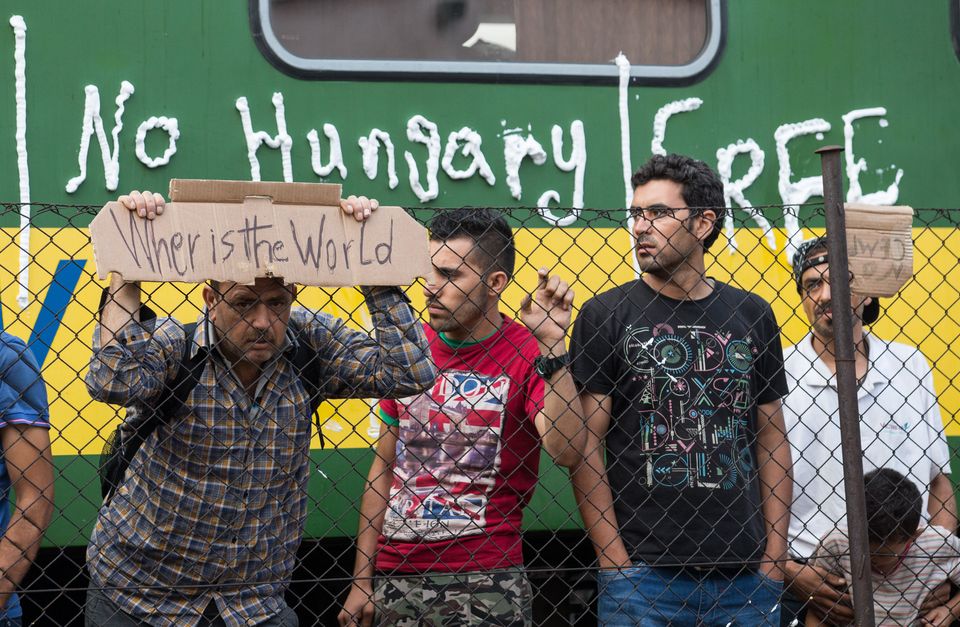