This might be our favorite 'Hunger Games' mashup we've seen since the 'HG' beanie babies viral video (okay, and these hilarious 'Hipster Cinna' memes): 'The Hunger Games' played out by classic Disney characters, from Tarzan to Mulan.

Created by artist Mae Uy -- who has a ton of other pop culture-related artwork on her personal page, blastedgoose.deviantart.com -- the below image attaches male and female Disney movie characters to the districts of Panem. 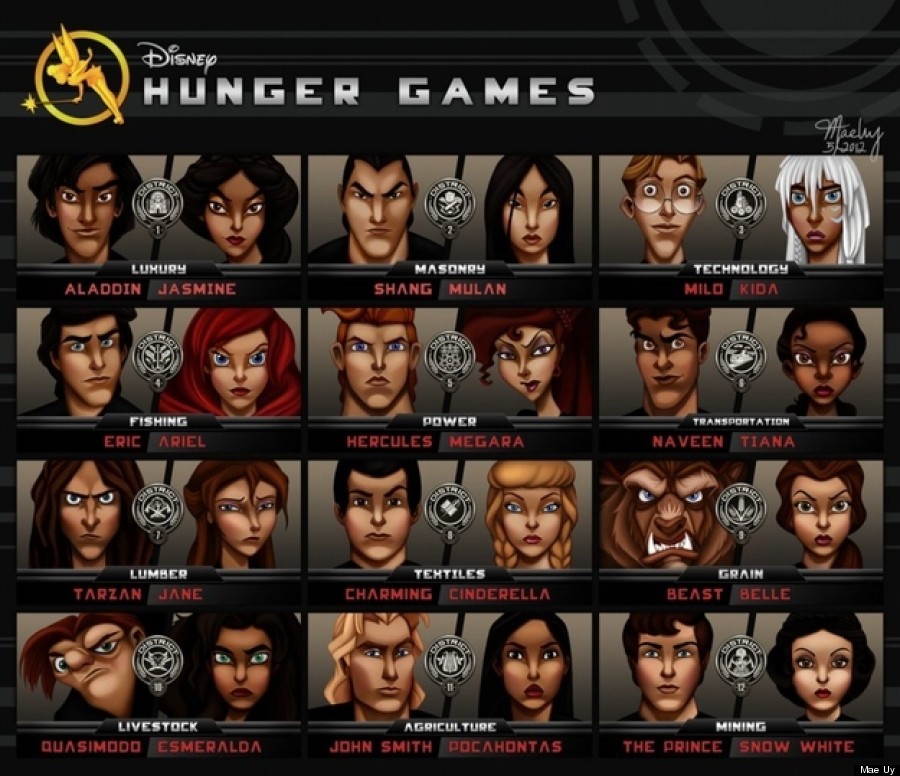 These are the descriptions from Uy on her site:

District 1 (Luxury) - Aladdin & Jasmine. I had to choose characters who represented luxury, at the same time intimidating enough to be Careers. With themes like greed & temptation (Cave of Wonders) and Aladdin's misguided notion that love can be won with power and riches, they seemed to be a good fit.

District 2 (Masonry) - Shang & Mulan Shang and Mulan is the only Disney couple who are both military trained, so it makes sense they belong in the District that specializes in weapons and Capitol soldiers. Also, I can def see them as Careers.

District 3 (Technology) - Milo & Kida. Who else imagined Beetee to look like Milo in the books? I did! I know Atlantis isn't one of the more popular movies, but Milo and Kida fit in so well that I couldn't leave them out! Plus the movie's steam punk vibe totally fits the HG!

District 5 (Power) - Hercules & Meg Power has a triple meaning here. In the books, it refers to electricity, which goes hand in hand with the God of Thunder's son. The second meaning is physical power, which Hercules possesses. Thirdly, the movie is all about the power of love, which is what drove Meg to sacrifice her life for Herc, and vice versa.

District 7 (Lumber) - Tarzan & Jane. I know lumber comes from the forest and Tarzan is set in the jungle but SHUSH! It fits okay???

District 8 (Textile) - Charming & Cinderella. Cinderella is basically a story about how a maid snagged a prince because she was wearing a nice outfit. Textiles = cloth = outfit. So there.

District 9 (Grain) - Beast & Belle. This was the hardest to place. Beast and Belle fit NONE of the Districts, but they fell into the category of "how angry fans would be if I didn't include him/her." I tried to justify it by thinking that grain = seed = rose? Contrived but there you go. By the way... in this world, Beast is a muttation. When he was a child, he was affected by some radiation or whatever, but it only affected his physical appearance so he's still eligible to compete in the HG.

District 10 (Livestock) - Quasimodo & Esmeralda. Nothing too deep...I thought of Esmeralda's goat and that was enough for me. Why not Phoebus? Because I hate him.

District 12 (Mining) - "The Prince" & Snow White. The dwarfs were miners! Close enough! Oh and here's some trivia for you. People think Cinderella and Snow White's princes were both named "Charming" but actually, SW's prince has never been referred to as such. He's simply "the Prince."

The million dollar question is: Who would win? Tweet us your choice @huffpostteen, sound off in the comments below, and head over to Mae Uy's awesome site to read more.